A family llama was on the loose for a month in a B.C. town

Until Sunday, July 14, Coco the llama had been on the lam in a B.C. town for about a month. Clinton, B.C. is not the natural home to llamas, but Coco has decided the wilds outside of town suit her just fine.
Jul 15, 2019 5:37 AM By: Brendan Kergin/Kamloops Matters 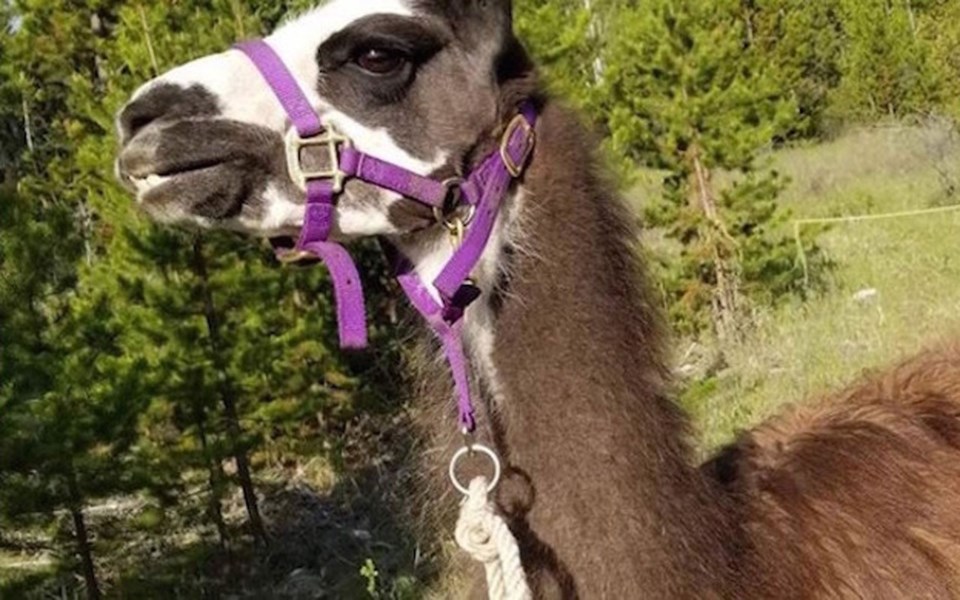 Coco the llama. Photo courtesy of the Udchitz family

Until Sunday, July 14, Coco the llama had been on the lam in a B.C. town for about a month.

Clinton, B.C. is not the natural home to llamas, but Coco has decided the wilds outside of town suit her just fine.

The Udchitz family of Clinton had been missing her since June. To say Coco had disappeared, though, wasn't quite accurate. She'd been spotted quite a lot, actually, but the crafty camelid (llamas are cousins to camels) had evaded capture regularly.

"She's been hiding here or sighted there," says Jessica Udchitz, who spoke with Kamloops Matters prior to Coco's return home. "We have a spot we meet (our neighbour) and he drives and I sit in the back of the truck."

The story begins back in April, when the Udchitzs, who moved to a 25-acre farm outside of Clinton from Calgary five years ago, decided to get a llama — they're good lookout animals, and the Udchitzs have goats. It just worked out Coco was available in Edmonton.

"She's not a great big llama, a medium-sized one," Udchitz says. "She fit comfortably in the back of our truck."

That trip, Udchitz recalls clearly seeing drivers and passengers in passing vehicles gawking and snapping photos of Coco as they drove from Edmonton to Clinton.

She was a friendly, well-tempered addition to the family. They could feed her from hand, she wouldn't fight when halters were put on or taken off. Coco would come along to pick Udchitz's 10-year-old son from the bus stop.

Then, in early June, Coco escaped. But she didn't go far. The Udchitzs live near a cross-country ski facility, where Coco seems to spend a lot of time. There's also an unused airstrip.

"She's claimed her territory," Udchitz says. "Our tactic now is to learn her behaviour."

While the trails have been her favourite area, it seems, she's wandered a lot. Aside from regular sightings in the area, she's spent the night sleeping behind a neighbour's barn; the next morning she was gone, but the impression she left was evidence of her overnight stay.

She even came home once, while the Udchitzs were out. She was spotted in front of the Udchitz's front door a week ago and seemed to be checking on her heard. Udchitz raced home and tried using a goat to lure Coco back into the yard.

"When she saw the rope she started running down the driveway," Udchitz says.

However, that wasn't the closest encounter. On one attempt, Udchitz tried lassoing the long-necked animal, only to have her dodge the throw. The loop landed on Coco's back, and then she took off.

Other times she was just out of arm's reach from the vehicle the Udchitz and others were in (her son and a neighbour were usually helping).

Another time, Udchitz had the rope in hand as her son tried to flush Coco towards her. Coco went for it, taking off toward Udchitz's area, but as Udchitz moved and looked down to get better footing, Coco was already gone.

"I think maybe Coco was a hockey player in a past life," she says. "She just turns on a dime and goes the other way. They're very fast animals. It's said they can run up to 35 miles an hour."

Trapping her hasn't worked either. They've tried a bunch of Coco's favourite foods to lure her, including sweet hay, grain and lettuce, but the llama hasn't bitten.

That said, she seemed to have found food while roaming around Clinton, which is about 125 km north west of Kamloops.

"Coco looks healthy and happy," Udchitz said before Coco was found. "She doesn't have any stuck in her fur, she doesn't look like she's lost weight; she's certainly not going hungry."

The B.C. Conservation Service was called. Since Coco isn't a wild animal, or local, she' was outside their jurisdiction, the service told the Udchitzs.

The missing llama had become the talk of the town, Udchitz says, coming up when at her son's school events, or at the post office.

"My three-year-old isn't shy, she's quick to tell people we have a bad llama," she says.

But on Sunday, July 14, Coco came home, and is safe and sound.

Jessica Udchitz reached out to Kamloops Matters. She wandered back up our driveway," she says in the message. "We corralled her with lots of people and sticks and I was able to place the rope are her neck."

"She's back in her pen enjoying cold water and veggies."