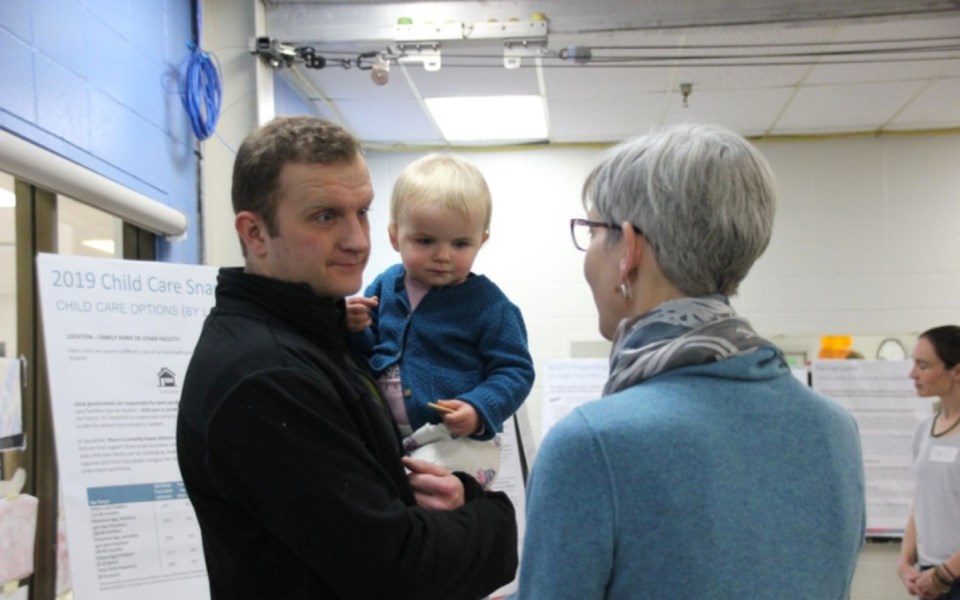 Mayor Karen Elliott speaks with a parent and child at the open house on Saturday at the Brennan Park Recreation Centre. Photo by KEILI BARTLETT

In Squamish, there is one childcare space for every five children aged one to two and a half. With a current population of nearly 500 kids that age — and only 96 licensed spaces — there is a 20 per cent childcare access rate.

The District of Squamish presented these troubling stats at an open house at Brennan Park Recreation Centre on Nov. 23.

The next phase, set for later this winter, will involve preparing an action plan and providing an update to council.

Torill Gillespie, a community planner contracted by the District of Squamish to co-ordinate the process, said if the child population in Squamish continues to grow over the next 10 years as it has, in order to achieve a 30% access rate, 72 new spaces would need to open every year for the next decade.

To accomplish that, the District's strategy proposes 44 actions.

Of those actions, 13 have been determined high priorities. These include setting targets for childcare spaces within neighbourhoods, reducing barriers to starting or expanding a childcare facility, and advancing the Community Amenity Contribution framework for developers to build early childhood educator (ECE) affordable housing units so that there are places where those working in childcare can afford to live.

"That's probably the biggest crunch right now, is childhood educators have a significant amount of education and serious skills that are so important and just don't have the wages they need to live in our community," Gillespie said.

She said the feedback the District has received thus far has been powerful, with families describing the sacrifices they make to care for their children while earning a living.

"We've had a lot of people who are leaving work or working less or who are leaving Squamish. Some people are commuting and accessing childcare in North Van, West Van — bringing their kids with them on the commute, which is really challenging as well," Gillespie told The Chief.

Parents who attended the open house noted the struggle of being on multiple waitlists and still not finding adequate childcare, or feeling pressured to take care that does not fit their needs or values.

Several said their family is considering moving away. At least one said lack of daycare spots is a factor in whether or not to have more children.

Mayor Karen Elliott was present at the open house for both days and told The Chief the turnout, which organizers estimate was around 100 people (not including children), was important "because the more feedback on this issue and challenge, the better for us at this point."

She noted that childcare concerns continue for parents once children start school. In Squamish, one out of 10 kids between five and 12 years old have access to before and after-school care.

"A school day is not a workday for most parents, and that's a challenge. It's a challenge for me," Elliott said. "The knock-on effect is challenging for our community. It means that there's a lot more stress, there's economic stress. We may have children that are floating between multiple daycares, so they don't have the consistency."

Ultimately, what needs to be done to solve the problem requires provincial help, she said.

"We definitely have some influence over making the childcare situation better, but we really need the province to fulfill their commitments around training and paying a living wage to these workers, and then working with us on housing solutions so that we can house daycare workers in communities where the cost of living is high," she said.

Elliott pointed to initiatives like the province's $10-a-day daycare pilot project, and said she's hoping to see an expansion of the program in the next provincial budget. She added the province has funded new daycare spaces, including in Squamish.

When asked what parents can do in the meantime, Elliott said, "When I first got elected and realized I didn't have childcare on Tuesdays.... I don't have family here, so I had to reach out and create my own family. You build up a network with other parents to help you out and then come to the table, come to these events and sending us letters and thinking of creative solutions."

She said the District will continue constructing new spaces, and she will be working with MLA Jordan Sturdy on how to recruit and retain ECE workers.

The District is also studying the impact the lack of childcare access has had on women, specifically.

Gillespie herself used to be a staff planner with the District, but after her second child was born, she struggled to find childcare after her maternity leave and ended up leaving her job to do contract work instead.

"I think sometimes childcare can be an invisible issue. There's this cultural norm that it's OK for women to want to be home. That's an expectation that's out there. It's not necessarily a reality for Squamish families who often need two incomes in order to live here. So we wanted to get an idea of some of the economic impacts on our community. We know we have a highly educated, young population who want to work and can't, so we have been looking for people to tell us if they're not working now or if they're not working as much as they want to be, what they do and how much they would be working if they had access to the childcare that they need."

Find more information and give feedback at www.squamish.ca.