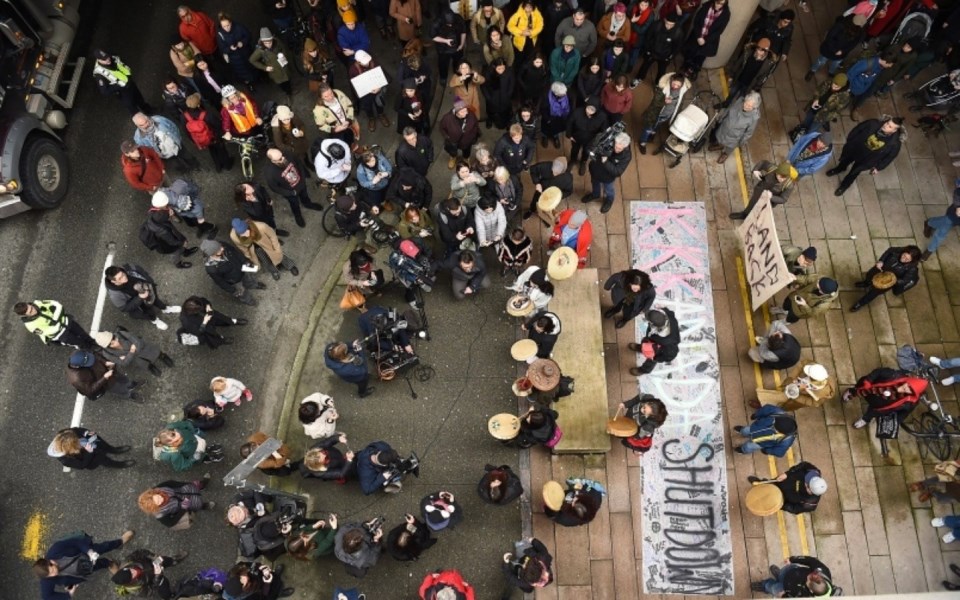 One of the leaders of the opposition movement within the Wet’suwet’en said Sunday’s announcement will not halt protests and blockades. File photo Dan Toulgoet

Work is set to resume today on the $6.6 billion Coastal GasLink pipeline, following a four-day pause to allow federal and provincial ministers of aboriginal affairs to hash out an agreement with the Wet'suwet'en hereditary chiefs who oppose the project.

On Sunday, provincial and federal ministers of aboriginal affairs and hereditary chief, Frank Alec (Chief Woos) announced they had agreed to an expedited process to recognize Wet'suwet'en rights and title.

But they also confirmed that differences remain over the Coastal GasLink pipeline. And one of the leaders of the opposition movement within the Wet'suwet'en said Sunday's announcement will not halt protests and blockades.

"We're not standing down," said Molly Wickham, governance director for the Office of the Wet'suwet'en. "We're not asking other people to stand down."

Indeed, Kahnawake Mohawks in Quebec said they would maintain a rail blockade in support of the Wet'suwet'en minority who oppose the project until further notice from the Wet'suwet'en, and protesters continue to target the BC Legislature.

In a joint statement released Sunday night, Scott Fraser, representing B.C., and Carolyn Bennett, representing the federal government, announced that a framework agreement had been reached to recognize Wet'suwet'en rights and title.

They arrived at a draft agreement that will be reviewed by Wet'suwet'en clan members "through Wet'suwet'en governance protocols for ratification."

Should clan members approve the draft agreement, Fraser and Bennett would return to Wet'suwet'en territory to sign the agreement, which would implement Wet'suwet'en rights and title on an expedited basis.

Senior governments and the Wet'suwet'en have not been able to reach an agreement on rights and title after more than two decades of negotiations through the BC Treaty process.

So the announcement that a tentative resolution to those issues had been reached after just three days of intensive negotiations may be greeted with some skepticism.

"It raises many questions," said Ellis Ross, Liberal MLA and former Haisla chief. "Will this replace (BC treaty) talks? Will neighboring First Nations be included for overlap purposes? How will all Wet'suwet'en members be included in any agreements?"

To date, the Wet'suwet'en chiefs who oppose the project have refused to meet with Coastal GasLink. So the company says it is encouraged that Chief Woos has said he is open to dialogue.

"We will be reaching out in the coming days to offer a meeting in the hopes of resolving outstanding issues with representatives of Dark House and the Office of the Wet'suwet'en," the company said in an email.

While recognizing Wet'swute'en rights and title to specific lands may help address future disputes, it may not address the current dispute over the Coastal GasLink project. The Wet'suwet'en remain divided on the issue. Elected band councils support the project, and a majority of Wet'suwet'en are said to support the project, while a majority of hereditary chiefs remain opposed.

Ultimately, even if Wet'suwet'en title is implemented, the Supreme Court of Canada has underscored that, even when aboriginal title exists, it can be infringed for projects deemed to be in the greater public good.

Dr. Bonnie Henry honoured at mural exhibition, picks up Fluevog shoes in Gastown
Jul 4, 2020 11:52 AM
Comments
We welcome your feedback and encourage you to share your thoughts. We ask that you be respectful of others and their points of view, refrain from personal attacks and stay on topic. To learn about our commenting policies and how we moderate, please read our Community Guidelines.