The Metro Vancouver and Sea to Sky weather forecasts called for some record-breaking high temperatures on Tuesday, March 19. However, the sheer amount of records that were broken may surprise you.
Mar 20, 2019 7:40 AM By: Elana Shepert/ Vancouver is Awesome 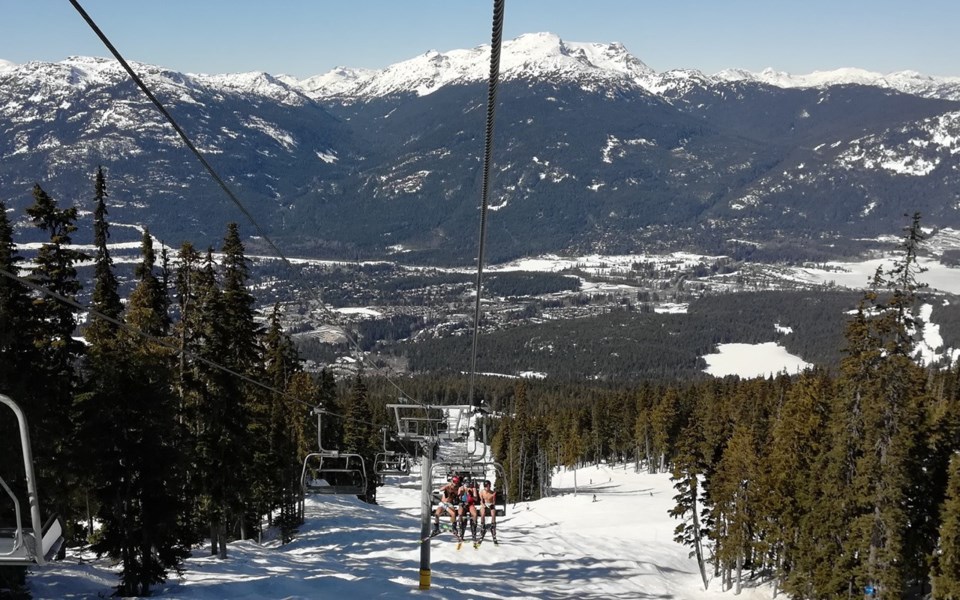 HOT LAPS: Gore-Tex was not necessary for three skiers who stripped down for a Jersey Cream lap during unseasonably warm temperatures earlier this week. Photo by Ziva Vrecko

The Metro Vancouver and Sea to Sky weather forecasts called for some record-breaking high temperatures on Tuesday, March 19. However, the sheer amount of records that were broken may surprise you.

In total, a jaw-dropping 42 new record high temperatures were set across the province yesterday. What's more, some areas saw soaring temperatures over 24°C.

The forecast calls for a high of 13°C in Whistler with sunny, clear skies and a low of 1°C. However, inland temperatures could reach highs of 22°C.

February 2019 was the coldest February on record in Metro Vancouver since the records began in 1937. Not only did the month see some frigid temperatures, but they also persisted throughout the month.

Although February saw the coldest temperatures to date, it also saw some of the greatest amounts of snowfall. In fact, 31.2 cm of snowfall was recorded at YVR, making it the eighth snowiest February on record.

‘My dog woke me up’: North Vancouver woman praises pooch for alerting her to severe townhouse fire
Nov 29, 2020 3:27 PM

B.C.'s top doctor says shop online or stay home if you don't wear mask where required
Nov 27, 2020 5:38 PM
Comments
We welcome your feedback and encourage you to share your thoughts. We ask that you be respectful of others and their points of view, refrain from personal attacks and stay on topic. To learn about our commenting policies and how we moderate, please read our Community Guidelines.