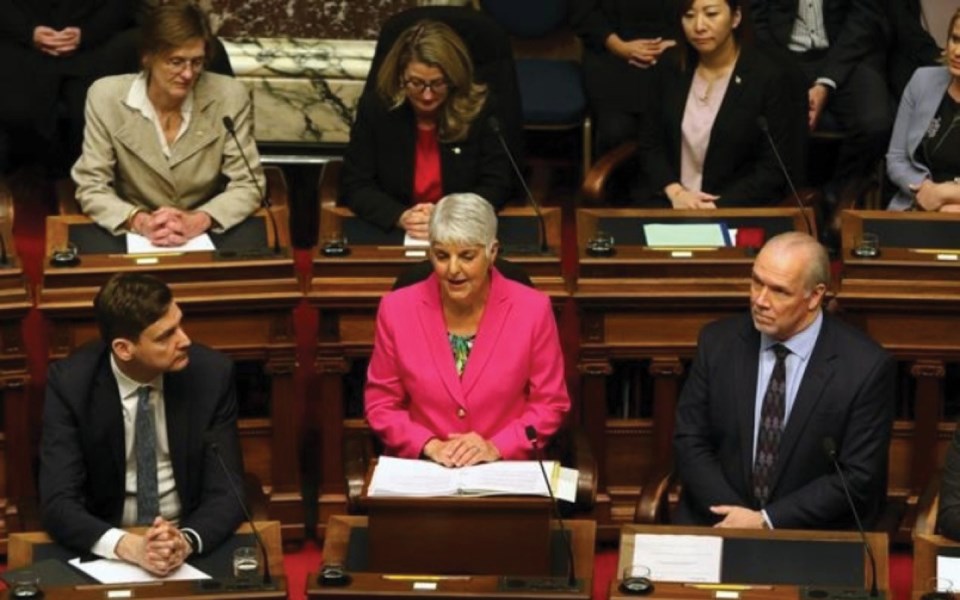 James announced the new taxes in a budget speech today that unveiled a needs-based grant for post-secondary students along with more money for affordable housing and the K-12 school system.

The new tax, which takes effect July 1, will bring in about $37 million a year.

"Research shows that teens between the ages of 14 and 18 are the top consumers of pop," James said. "This is a step that health professionals and an all-party committee have long supported, because this is about keeping young people healthy while taking in a bit of revenue to continue to pay for enhanced health care services for everyone."

The B.C. Business Council of B.C. complained that the budget, while balanced, will do nothing to encourage new companies to invest in B.C. , while the new tax on top earners adds to the risk that head offices will leave the province.

"We think it's a mistake," said Jock Finlayson, the council's executive vice-president. "It won't raise as much revenue as they're predicting and it's a bit of a shot across the bow, I think, to business that, even though we're trying to work constructively with this government, we're not having much success."

The Canadian Centre for Policy Alternatives, by contrast, welcomed the tax on top income earners, but felt James was "over cautious" and could have done more for those in need by raising welfare and disability rates.

"We're a very rich province," said policy analyst Alex Hemingway. "We're in a position where we could increase our social investments, our infrastructure investments in a way that would meet urgent needs that are facing the province."

Among the budget's spending highlights over three years:

$24 million on a new needs-based grant for post-secondary students that the government says will provide assistance to more than 40,000 students starting in September. Students will receive up to $4,000 to help with tuition.

$1.4 billion for child care to provide more space, build or improve facilities and increase the number of workers.

$50 million to fight homelessness by adding 505 new shelter spaces across the province and opening two new 60-bed "navigation centres" that will help people get access to housing-placement services.

$339 million on the K-12 system to deal with rising enrollment, including 5,100 new students expected to enter the public system in September.

$20 million to increase the earning exemption for people on income assistance, beginning next January. Under the changes, a person receiving disability assistance will be able to an extra $3,000 a year for a total of $15,000 without having the money deducted from their assistance payments.

James said the government plans to spend a record $23 billion in taxpayer-support capital spending over three years to build new roads, schools, hospitals, housing and other projects across the province.

"The scale of change is staggering," she said, noting that $18 billion worth of work is happening across the province.

"By building the schools, roads, hospitals, housing, post-secondary facilities and more than our growing province needs, our plan is supporting 100,000 direct and indirect jobs during construction."

The B.C. Teachers' Federation welcomed increased investment in the public school system, but expressed concern about the lack of money to deal with an ongoing shortage of teachers, particularly in northern B.C.

"We're seeing a significant shortage in the North Coast, North Central and Peace regions of our province where hundreds of uncertified folks are currently working in classrooms," said Teri Mooring, union president. "We're very concerned about that. There needs to be something to address that."

The Wilderness Committee, meanwhile, panned the NDP's response to climate and environmental issues as "inadequate."

Torrance Coste, national campaign director, said the investments in CleanBC are positive, but the climate crisis requires more attention than it's getting from the NDP government.

"Environment, climate change, they remain backburner issues for the B.C. government," he said. "We don't feel that's in keeping with where the average British Columbian is at."

Camping approved for Vancouver parks but tents must be gone by mid-morning
Jul 15, 2020 4:14 PM

RCMP say someone left needle-filled lemons in Port Coquitlam, B.C., park
Jul 15, 2020 2:45 PM
Comments
We welcome your feedback and encourage you to share your thoughts. We ask that you be respectful of others and their points of view, refrain from personal attacks and stay on topic. To learn about our commenting policies and how we moderate, please read our Community Guidelines.