Ride-hailing companies such as Uber and Lyft will be allowed in British Columbia by fall of 2019 after the provincial government introduced legislation to modernize B.C.'s taxi industry.
Nov 19, 2018 8:00 AM By: Katie DeRosa / Times Colonist 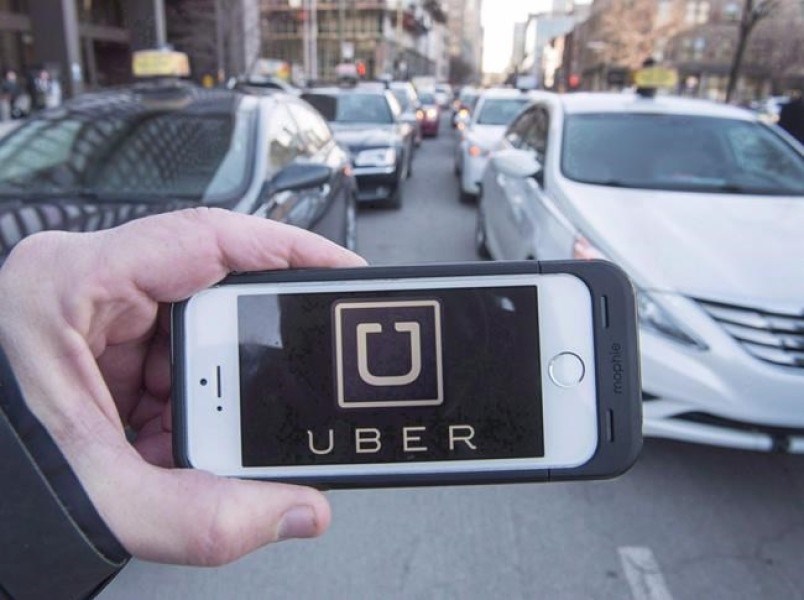 Ride-hailing companies could begin operations in British Columbia by next fall under legislation introduced today. The Uber logo is seen in front of protesting taxi drivers at the courthouse in Montreal, Tuesday, Feb. 2, 2016. THE CANADIAN PRESS/Ryan Remiorz

Ride-hailing companies such as Uber and Lyft will be allowed in British Columbia by fall of 2019 after the provincial government introduced legislation to modernize B.C.'s taxi industry. However, it's unclear when the first ride-hailing vehicles will hit the road.

"This is milestone legislation that gets ride-hailing right for B.C.," said Transportation Minister Claire Trevena. "British Columbians absolutely want more options and flexibility in how they get around, but with checks in place to make sure their ride is a safe one."

Ride-hailing companies will be able to submit applications to the Passenger Transportation Board in September 2019. It's unclear how long it will take to process those applications.

If passed, the Passenger Transportation Amendment Act enables ICBC to develop specific insurance programs for ride-hailing services. The act gives more power to the Passenger Transportation Board to set fares, make decisions on the number of licences and the boundaries in which taxis and ride-hailing vehicles operate, taking some of that power away from municipal governments.

Local governments will still have a say on the type of vehicles, taxi stand locations and business-licence requirements.

The government hopes this will create a data-driven approach to improve ride-hailing and taxi services, especially at high-demand locations and at peak times.

The ministry said it will develop measures to make sure people are not left stranded when travelling from one municipality to another.

Ride-hailing and taxi drivers will be required to maintain a class 4 passenger licence and undergo mandatory criminal record checks. Drivers will also have to pay a per-trip fee to fund more accessibility options for people with disabilities, although the exact fee has not yet been set.

Taxi and ride-hailing companies that break the rules will face steeping fines of up to $50,000.

The all-party committee that will advise on regulations is a promising development, Weaver said, as it requires parties to collaborate to make ride-hailing a reality.

"While it's a step forward to actually have legislation in front of us, more work needs to be done to ensure British Columbians have access to ride-hailing in 2019," he said.

"The fact that an issue with such high levels of public demand has taken so long to see progress is a failure of our political system. It's obvious that neither of the other parties has been able to find the political will to action this issue in a timely manner."

Weaver said the legislation and regulations must strike the right balance so that the province can ensure passengers are safe, that businesses have a fair playing field while also giving British Columbians a full range of modern transportation options.

Weaver said it's still unclear when people will be able to call an Uber or Lyft.

"What British Columbians really want to know is when they will be able to access their services," he said.

Weaver has introduced legislation to enable ride-hailing three times. His third attempt in the fall of 2017 resulted in the issue being referred to an all-party committee, which held public consultations and delivered a report in February 2018.

The B.C. Federation of Labour expressed disappointment that the legislation fails to promote good-paying and stable jobs and protections for workers. The federation also criticized the labour relations practices of large multi-national companies such as Uber.

"We appreciate the goal of the bill is to expand transportation options and focus on passenger safety," BCFED President Irene Lanzinger said in a statement. "But proposed legislation should have included measures to modernize outdated employment laws that give employers too much power and employees too few rights. The needs of workers have been left completely out of the equation."

Lanzinger said ride-hailing enterprises such as Uber helped invent the "gig economy" in which jobs are precarious, unstable and low paying.

"Workers need a level playing field and more clout to deal with rich and powerful companies," she said.

The federation is calling for reforms that ensure ride-hailing companies can't classify their employees as independent contractors.

Victoria Mayor Lisa Helps commended the province for moving forward on legislation that will modernize the taxi industry and open the door to ride-hailing in the city.

"The legislation aligns with city council's priorities and will result in more transportation options that are both safe, flexible and convenient for people," Helps said.

The NDP government has faced criticism for being slow to open the door to ride-hailing, which is well established in other parts of the country.

Premier John Horgan promised before the May 2017 election that services such as Uber and Lyft would be operating by the end of that year.

Instead, the government commissioned a report by Dan Hara, an industry expert who consulted with the taxi industry and in July, released his recommendations on a "made-in-B.C." approach to ride-hailing.

In response to some of his recommendations, the province has promised to give the taxi industry more flexibility to compete with ride hailing companies. Taxi companies can now offer discounts for booking through an app and give customers the ability to pay through the app.

Victoria Taxi, Blue Bird and Yellow Cab all have apps customers can use to order taxis and track the driver's progress, but passengers cannot pay through the app.

'Wacky' summer on the water: COVID ups the volume and safety concerns near Deep Cove
Aug 10, 2020 5:37 PM
B.C. provincial health officer calls on younger people to avoid parties
Aug 10, 2020 5:20 PM
Comments
We welcome your feedback and encourage you to share your thoughts. We ask that you be respectful of others and their points of view, refrain from personal attacks and stay on topic. To learn about our commenting policies and how we moderate, please read our Community Guidelines.