Photographers were asked to capture their concept of home.
Feb 16, 2021 8:54 AM By: Pedro Arrais / Times Colonist 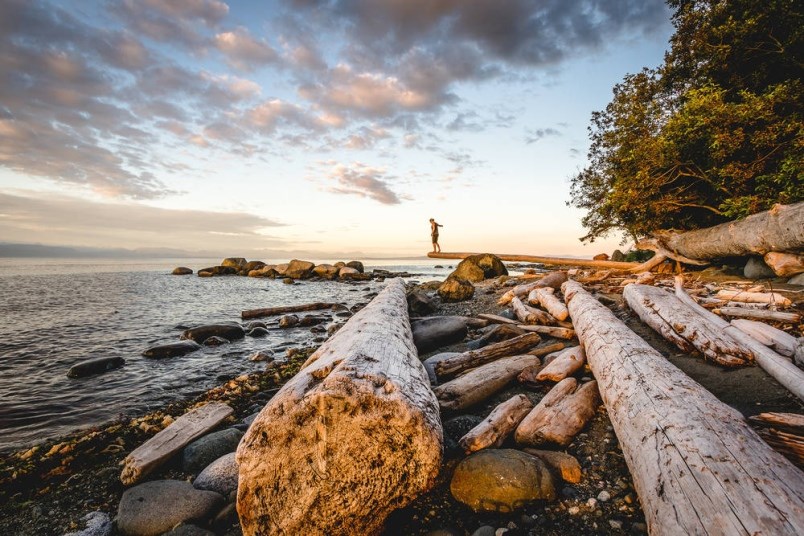 A photo of a log-strewn Comox Valley beach has won the first prize in a Canadian Geographic photography competition. Sara ­Kempners photo of herself on the beach beat out hundreds of entries to the magazines photo competition, which was based on the theme of What is Home? Photo by Sara Kempner

A self-taught photographer from Cumberland has won the first prize in a photo competition hosted by Canadian Geographic magazine.

Sara Kempner’s photo of herself on a log-strewn beach beat out hundreds of entries to the magazine’s photo competition based on the theme What is Home?

Kempner’s picture is of a beach located on her parent’s property in the Comox Valley.

“My picture is an homage to a beach that was fundamental to my upbringing,” she said. “This beach served as my playground when I was growing up. All the time I spent running along the logs and exploring the nooks and crannies has made me ­appreciate the outdoors — and made me the person I am today.”

Unlike many landscape photographers, Kempner, 37, almost always adds a human element in her shots.

“You may notice a person in the photograph, but they are usually very small because I want to convey the immense scale of nature,” she said.

Kempner is not always behind the lens when her photographs are taken. She works solo, setting her camera on a tripod to capture the lakes, mountains, rivers and ocean around where she lives. The digital camera is programmed to take pictures over a period of time.

She then inserts herself into the picture, moving about within the frame.

“It’s a self-portrait with me in nature,” she said. “The images are meant to be natural, not forced or posed.”

Born and raised in the Comox Valley, Kempner worked as an education assistant in her local school district. As the COVID-19 pandemic hit, her work dried up.

She decided just last year to take a leap of faith, transitioning to become a full-time photographer.

Although she will take pictures on commission, she hopes to specialize in outdoor photography, with an emphasis on landscapes and mountain-biking, a passion she shares with her husband.

“It has been scary taking the leap — but winning the Canadian Geographic competition has certainly given me a boost of confidence.”