VANCOUVER — British Columbians will ring in the new year by joining all Canadians in not paying monthly rates for health care. Premiums under the province's Medical Services Plan will be eliminated on Jan.
Dec 9, 2019 7:50 AM By: The Canadian Press 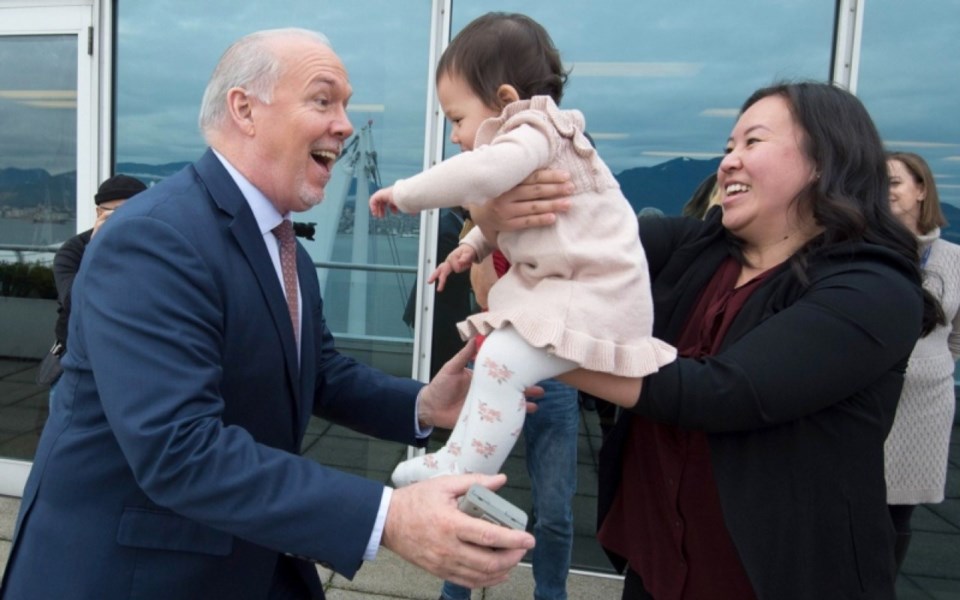 Premier John Horgan with 13-month-old Caliah Kornneluk and her mom Jocye Yan after a news conference about MSP premiums in Vancouver on Thursday, Dec. 5, 2019. PHOTO BY JONATHAN HAYWARD, THE CANADIAN PRESS

VANCOUVER — British Columbians will ring in the new year by joining all Canadians in not paying monthly rates for health care.

Premiums under the province's Medical Services Plan will be eliminated on Jan. 1, saving individuals up to $900 a year while families will pocket up to $1,800.

The change will come two years after premiums were halved and a year after B.C. introduced a so-called Employer Health Tax of 1.95 per cent for businesses with a payroll over $1.5 million. Companies with a payroll under $500,000 were exempt from the tax, while those in between have paid a reduced rate.

Finance Minister Carole James said Thursday the last such health-care tax in the country has been the most complex of any of the province's programs to manage.

"Getting rid of medical service plan premiums makes a huge difference to people in our province when it comes to dollars in their pockets."

The regressive tax was unfair because everyone paid the same premiums, James said.

Premier John Horgan said the employer tax replaces medical premiums that amounted to a regressive tax system and is a better way of financing health-care costs while saving money for families and individuals who will have it to spend in small businesses in their communities.

"Every other jurisdiction in Canada has found a way to progressively collect revenues to provide services for people," he said. "We're following suit with other jurisdictions. This is not extraordinary. It's a small, small sliver of the business community that's been asked to help us meet our costs and I think that's fair and that's equitable."

The premiums will amount to a net tax cut of $800 million, the Finance Ministry said.

Vancouver resident Joyce Yan was invited by the government to the news conference, along with her 13-month-old daughter Caliah Korneluk and her retired mother, Yichun Dai.

Yan said her family of three will save $1,800 a year and she has looked forward to the government fulfilling an election province.

"To put that in perspective, that equals 9,000 diapers or 4.9 years' worth of diapers, 60 pounds of my favourite coffee, or after 18 years that's over $32,000 that we can put towards her post-secondary education," she said.

Employers have complained that paying both the Employer Health Tax and medical premiums this year has amounted to "double dipping," eating into their bottom line.

Jock Finlayson, executive vice-president of the Business Council of British Columbia, said the elimination of premiums will especially help students, retirees and the underemployed, noting those on social assistance and low incomes were exempt from paying the rates.

"A lot of smaller employers did not pay it," he said of workers who had to cover their own premium costs.

The current Employer Health Tax, despite the elimination of medical premiums, has resulted in a net cost for employers and criticism from some business groups including the BC Chamber of Commerce and the Canadian Federation of Independent Business, Finlayson said.

However, the health tax is not any different from how some provinces, including Ontario, Quebec and Newfoundland and Labrador, fund health-care costs, he noted.

"It's a misnomer to call it a health tax, it's a payroll tax."

This report by The Canadian Press was first published Dec. 5, 2019.