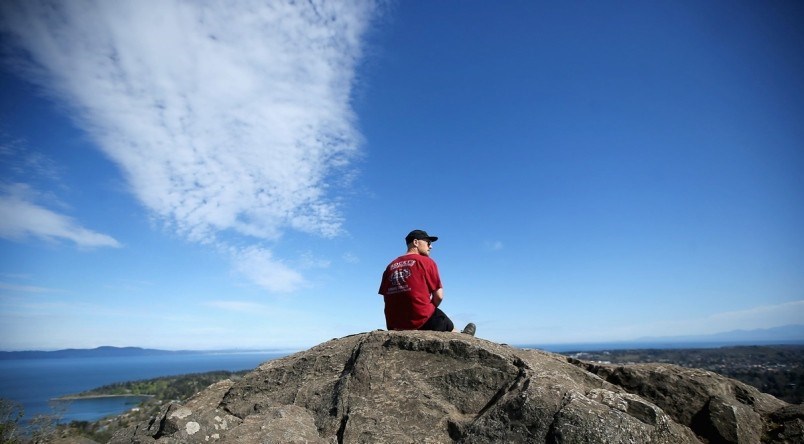 Alastair Prentice, who moved to Victoria from Australia, takes in a crystal-clear view under a sunny sky from atop Mount Douglas. Sunshine is in the forecast for the rest of the week. April 14, 2020 Photograph By ADRIAN LAM, TIMES COLONIST

Armel Castellan, a meteorologist, said there appears to be a "strong correlation" between the timing of the outbreak and a 40 to 50 per cent drop in both nitrous oxide and particulate matter — two of the three component groups that make up the air quality health index.

"That was quite remarkable when we put that together," he said, noting that researchers examined data from the last two weeks of March. In addition to fewer people travelling as a result of the outbreak, B.C.'s Environment Ministry banned open burning in populated airsheds to further reduce air pollution and protect people's health during the pandemic.

All of that has led to improved air quality in the region, which includes Metro Vancouver and Greater Victoria, Castellan said.

But if you were wondering whether that explains the impressive views of the Olympic Mountains lately, University of Victoria geography professor David Atkinson doesn't think so.

He said Victoria produces too little pollution to notice a dramatic improvement in visibility if people stop driving for a period of time.

Atkinson said it's more likely that residents are keying into improved weather patterns after gloomy winter months, as well as the arrival of dry air.

"That will always clear things out pretty nicely," he said. "I mean, we can see the Olympics every once in a while. Periodically, that will happen and it's for the same reason."

Atkinson said a change in travel patterns is more likely to have a noticeable impact in Metro Vancouver, where pollution can get trapped by the mountains.

"If we get a flow from the strait or from the ocean at all, if it's not strong enough, it just sort of pins [pollution] in the Lower Mainland area," he said.

B.C. names all-party police reform committee to examine scope of systemic racism
Jul 8, 2020 4:04 PM
B.C. crosses 3,000 mark for COVID-19 cases; records three more deaths
Jul 8, 2020 3:55 PM
BC Prosecution Service approves three charges against RCMP officer
Jul 8, 2020 2:59 PM
Comments
We welcome your feedback and encourage you to share your thoughts. We ask that you be respectful of others and their points of view, refrain from personal attacks and stay on topic. To learn about our commenting policies and how we moderate, please read our Community Guidelines.