MONTREAL — Canadian travellers and the country's two biggest airlines are in for a turbulent ride after Canada and the U.S. announced a ban on all Boeing 737 Max 8 aircraft from Canadian airspace due to safety concerns.
Mar 13, 2019 8:35 AM By: The Canadian Press 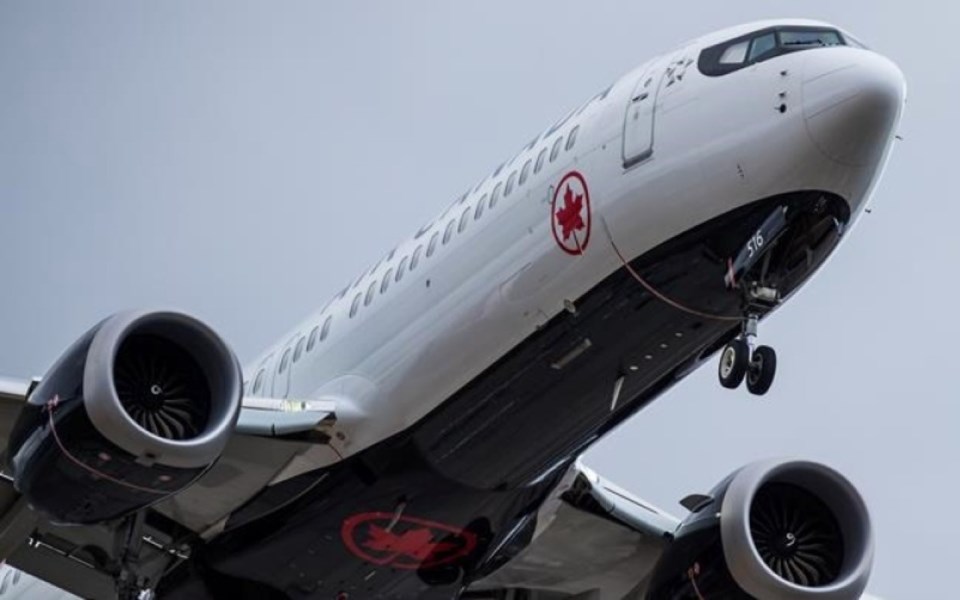 An Air Canada Boeing 737 Max aircraft arriving from Toronto prepares to land at Vancouver International Airport in Richmond, B.C., on March 12, 2019. Boeing's share price has dropped more than 11 per cent -- a loss of more than US$26.6 billion -- since the plane maker's 737 Max 8 fatally crashed Sunday, but Canada's two largest airlines have emerged nearly unscathed. Air Canada and WestJet Airlines Ltd. saw their stocks decline about 3.4 per cent and 2.5 per cent, respectively, since the Ethiopian Airlines disaster that killed all 157 people on board. THE CANADIAN PRESS/Darryl Dyck

MONTREAL — Canadian travellers and the country's two biggest airlines are in for a turbulent ride after Canada and the U.S. announced a ban on all Boeing 737 Max 8 aircraft from Canadian airspace due to safety concerns.

"For a week or two, it will be bedlam and chaos," said Marvin Ryder, an assistant professor of marketing at McMaster University.

Transport Minister Marc Garneau told reporters Wednesday morning the decision to ground the planes was a precautionary move that was made after a review of all the available evidence, four days after the Ethiopian Airlines disaster that killed all 157 people on board, including 18 Canadians.

The suspension comes as thousands of Canadians are away on March break, stoking fears of stranded passengers and rebooking delays.

"All those people need to get home," he said. "I'm getting passed around back and forth between two airlines, [each] saying it's the other's responsibility."

Jason Scarrotts, a father of two young children, said he was on the phone with Air Canada for 90 minutes before speaking with an agent to rebook their Max 8 flight from Vancouver to Palm Springs, only to be disconnected. "Please help," he tweeted.

Air Canada and WestJet Airlines Ltd. both said they are in the process of grounding their Max 8s.

"We are working to rebook impacted customers as soon as possible but given the magnitude of our 737 Max operations, which on average carry 9,000 to 12,000 customers per day, customers can expect delays in rebooking and in reaching Air Canada call centres and we appreciate our customers' patience," the company said in a statement.

WestJet noted that the grounding order affects just eight per cent of its 162-plane fleet.

Air Canada has 24 Max 8s and WestJet has 13. The carriers use the commuter planes daily to ferry passengers on routes that include Vancouver-Calgary and Vancouver-Montreal as well as March break favourites such as Toronto-Puerto Vallarta and Vancouver-Honolulu.

Ryder estimates the ban could cost the two airlines $100 million collectively in the first 10 days.

"They don't have another 24 jets just sitting parked somewhere that they can bring into service to cover it...They'll have to cancel flights," he said.

Ryder explained the airlines may try to cut the number of flights on some routes and replace the Max 8 jetliners with larger planes.

Air Canada's 4,000 pilots and 8,500 flight attendants said in separate statements they support Garneau's move "to err on the side of prudence," in the words of the Canadian Union of Public Employees.

More than 40 countries have grounded or banned the Max 8 from their airspace since the crash over safety concerns and possible parallels to an Oct. 29 incident which saw the same type of aircraft plunge into the Java Sea, killing 189 people.

Aviation authorities in the U.S. have expressed continued confidence in the aircraft, despite mandating a software update following Sunday's crash.

Air Canada's customer service line is 1-888-247-2262. Customers are advised to check their flight status at aircanada.com.