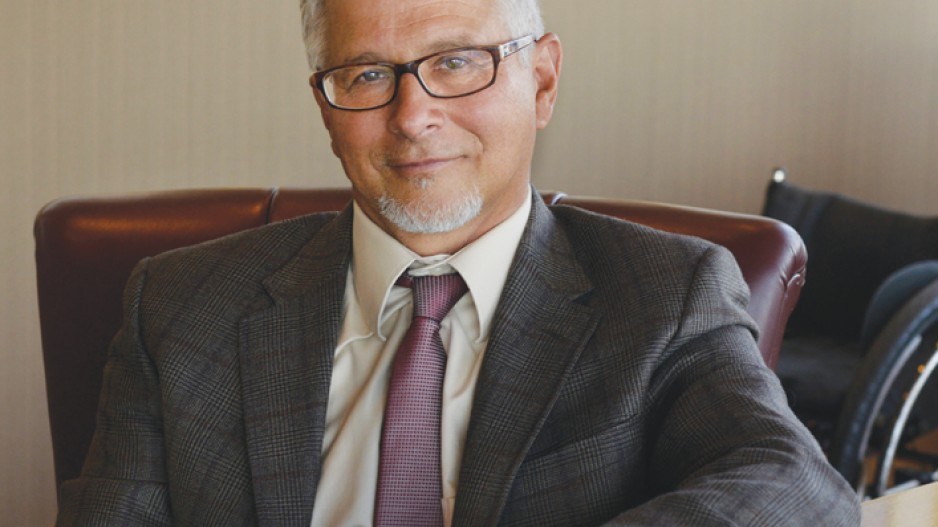 Joseph Arvay, arguably the most influential constitutional lawyer in Canada's history, died this week at age 71. Photo by Dominic Schaefer

"Joe was one of the finest constitutional lawyers in this country and was a tireless advocate for human rights, Indigenous peoples and countless other marginalized or disadvantaged groups,” B.C. Attorney General David Eby said. “He donated thousands of hours of his time to defend the rights of people who are on the margins, and he did so to make our country a better and more equal place.”

Cases he fought to the Supreme Court of Canada included freedom of thought and expression; the rights of the LGBT community, same-sex marriage, addicts' health, sex workers’ rights and those seeking the right to die.

For his unstinting efforts, frequently done pro bono, Arvay was named an Officer of the Order of Canada in 2017 and awarded the Order of British Columbia a year later.

The Governor General’s Order of Canada biography said Arvay “helped shape our understanding of the Canadian Charter of Rights and Freedoms.”

And, Arvay believed the government should foot the bills when Canadians sought equity in fighting constitutional cases.

“I believe that if we are going to have an equal playing field when we are litigating the charter, the government should be required to pay the cost of not only the government lawyers but the lawyers on the other side of the case because one of the greatest impediments to justice or the access to justice in Canada is our legal costs,” he told BIV in 2014.

“Governments don't have any problems finding the money to defend laws when they are being challenged, but citizens have a huge amount of difficulty.”

“With keen legal acumen and dedication to social justice, he has played an unparalleled role in shaping the interpretation of the law on matters of civil rights and liberties,’ the Governor General’s Order of Canada site said.

"Joe's commitment to the public interest was matched by his exceptional talent. He was brilliant in arguing even the most difficult cases, and his willingness to take on causes at the edge of the law meant that his work reshaped constitutional law in Canada,” Eby said. “He was universally respected and admired for his remarkable intellect, unparalleled work ethic, legal creativity and courage.”

In 1969, Arvay was in a car accident that left him a paraplegic. It would alter his perspective forever, and it was probably one of the biggest reasons he was drawn to litigating minority rights. He used a wheelchair ever since, and while it didn’t restrict him from several activities – including cycling – it completely changed the way he saw the world.

“I went from being a member of the majority and all of a sudden became a member of a minority,” Arvay said in 2014. “I became acutely aware of discrimination and prejudice against minority groups, including me.

“I believe in my clients' causes. That's how I feel about every case that I do. Once I take on a case, I fight very hard for my clients and believe in the rightness and the justness of their cause.”

Arvay forcefully argued his cases before judges in every court in the land, appearing before the justices of the Supreme Court of Canada multiple times.

Arvay’s cases read like a who’s who of Canadian legal landmarks:

• He represented plaintiffs Egan and Nesbit in a case that established sexual orientation as prohibited grounds for discrimination;

• He was lead counsel in the case that struck down the laws preventing same-sex marriage;

• He represented Gloria Taylor in Carter vs. Canada, which gave her legal access to doctor-assisted suicide (she died of natural causes);

• He acted for sex workers in a case where the Supreme Court of Canada in 2013 struck down three of the country's prostitution laws as inconsistent with the Charter;

• He represented Insite safe injection site, resulting in the facility remaining open and recognizing that addicts had a right to supervised injection;

• He argued on behalf of children of sperm donors, giving them the same rights as adopted children in terms of information access;

• He acted for Winston Blackmore when he was charged with polygamy;

• He argued against the Surrey School District, establishing that school districts can't refuse to allow the use of books that portray same-sex relationships in a positive light;

• He represented several health services unions in the case that established that collective bargaining is constitutionally protected;

• He prosecuted a case for the Crown involving over 100 people (one of the largest number of accused ever charged under one indictment) who had protested against Everywoman's Health Centre;

• He represented Bill Vander Zalm arguing that the HST was unconstitutional, and in another case defending the legislation that allowed for the referendum on the HST;

• He was on the legal team representing Jenna Talackova, a transgender beauty pageant contestant fighting for the right to compete in the Miss Universe contest;

• He acted for unions before the Supreme Court of Canada on whether there is a constitutional right to strike (decision pending);

• He acted for the Assembly of First Nations in the leading aboriginal title case now under reserve in the Supreme Court of Canada (decision pending);

• He represented the Hells Angels in a case that challenges civil forfeiture laws;

• He acted as co-counsel with David Martin in the Communications Security Establishment Canada (CSEC) case in challenging the constitutionality of federal legislation that permits CSEC to intercept private communications and collect and analyze metadata;

• He acted together with Glen Orris on behalf of one of the skippers charged with criminal negligence in the case of the B.C. ferry that sank (the Queen of the North);

• He acted as co-counsel together with Marilyn Sandford and Cameron Ward for Ivan Henry, who was wrongfully convicted of sexual assault in the 1980s and spent 27 years in prison (this case will be heard in the Supreme Court of Canada in the coming year);

• He acted for the BC Health Coalition in defending the B.C. legislation that prohibits for-profit medical clinics; and

• He represented the provincial court judges in a compensation dispute with the provincial government.
At the time of his death, Arvay was in the middle of a years-long case about whether the Ontario and federal governments have been fulfilling their obligations to the Anishinaabe nation and taking the government to court, on behalf of fifteen children aged between 10 and 19, due to the government’s alleged failure to adequately respond to the threat of climate change.

Like so many or Arvay’s cases, the Little Sister’s case wound up in the Supreme Court of Canada. Twice.

Even when the case was over, its ghost re-appeared. When the B.C. censor tried to shut down the Out on Screen queer film festival's 2002 opening night film about the store’s fight against Canada Customs book seizures, Arvay stepped in, helping the festival communications director write news releases and the board tackle the government. Victoria backed down with an apology.

“Joe Arvay was immediately by our side,” said Drew Dennis, festival executive director at the time. “Joe was a fierce advocate for equity and human rights.”

The irony in that case was the censor was trying to censor a film about censorship, Dennis said.

Mark Macdonald was Little Sister’s book buyer at the time. He is also the stepson of lawyer Irene Faulkner, who worked with Arvay on the case.

“He was just such a good guy,” Macdonald said. “In the courtroom, he was so well-equipped to take other lawyers down. He knew the law so well.”
And, Macdonald said, little stopped Arvay. He remembers Arvay arriving at his parents’ Mill Bay home on a Harley with a sidecar. “There was nothing getting in his way.”

Mark Townsend was with Portland Hotel Society when it decided to tackle Stephen Harper’s Conservative government’s attempt to shutter Insite, Vancouver’s supervised injection site for addicts. Arvay took that case to Ottawa, the justices ruling the site a health facility to which people had a right.

The ruling paved the way for further facilities.

“By helping us in the Insite case, he helped save lives in Vancouver and across Canada,” Townsend said, calling Arvay’s death “devastating.”
“He’s like a beacon of hope,” he said.

Lawyer Katrina Pacey of PIVOT Legal Society was co-counsel with Arvay on the prostitution laws case.

“He was just fierce, and fun and courageous and insightful.”

Lexpert named Arvay one of the top 100 best lawyers in Canada for several years and was named Vancouver lawyer of the year in public law and administrative law for 2013 and 2016.

Arvay has been the recipient of many awards and honours including most recently the Advocate Society’s Justice Award 2015. In 2010, 2011, 2012, 2013 and 2014, he was named by Canadian Lawyer Magazine as one of the top 25 most influential lawyers in Canada.

Arvay was a fellow of the Litigation Counsel of America and of the American College of Trial Lawyers.

Arvay was elected to the board of directors of B.C.’s legal profession regulator, the Law Society of B.C., for a two-year term 2014.

Arvay is survived by his wife of 20 years, Connie Addario, and the five children of their blended family: Louigi, Hannah, Carmen and Gina Addario-Berry, and Emily Arvay. He also leaves six grandchildren and two sisters.

A Vancouver mother is fundraising to save her daughter’s life from an extremely rare disease
Dec 7, 2020 1:41 PM