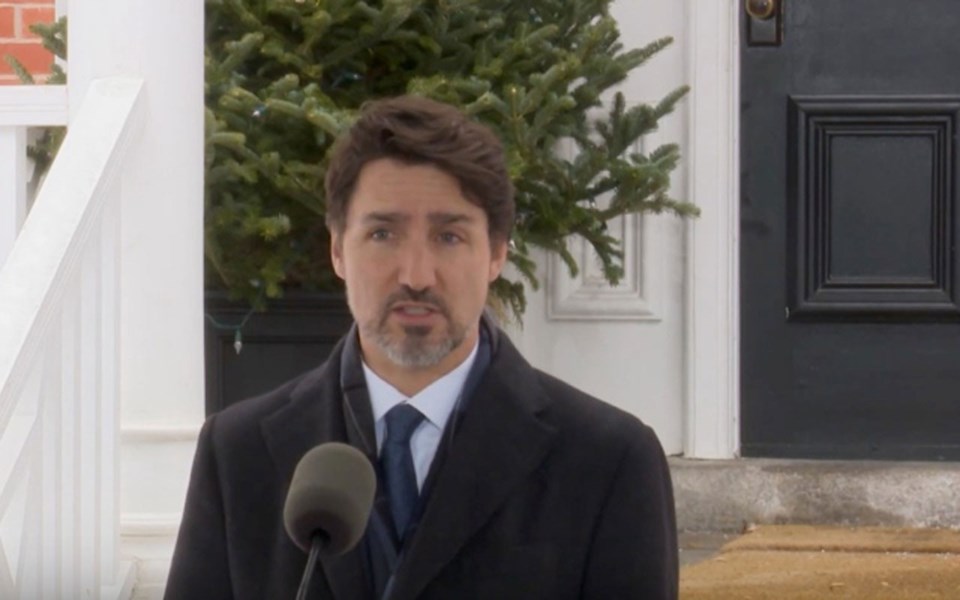 Prime Minister Justin Trudeau has announced a multi-billion dollar economic stimulus package to help Canadians amid the COVID-19 pandemic – and the closure of the Canada-US border to all non-essential traffic.

"We have agreed that both Canada and the United States will temporarily restrict all non-essential travel across the Canada-US border," Trudeau announced, speaking from self-isolation outside his home in Ottawa Wednesday morning.

The move affects tourists and shoppers but ensures the "critical" supply chains and movement of goods between Canada and the US during the pandemic, said Trudeau.

People who cross the border for work will also not be affected by the closure, Trudeau said.

Trudeau said the border measures will remain in place for as long as he and U.S. president Donald Trump "feel they need to last."

The government will provide up to $27 billion to directly support Canadian workers and businesses, and $55 billion to meet liquidity needs of Canadian businesses and households through tax deferrals.

The aid will come in the form of an emergency care benefit package for people who do not qualify for EI or who don't have access to paid sick leave, said Trudeau.

This will include people who are ill or have to self-isolate, or are taking care of someone with the coronavirus.

The emergency care benefit will provide money every two weeks to workers who need to stay home, for up to 14 weeks.

The amount paid will be comparable to that paid under EI.

Also, employers of small businesses will be provided with a temporary wage subsidy to help cover workers' wages.

The subsidy will equal 10 per cent of the salary paid to employees for a period of three months, said Trudeau.

"This will encourage employers to keep staff on the payroll during these uncertain times," he said.

Combined, the financial package represents more than three per cent of Canada's GDP.

"We are focused on making sure that people who are not getting income or revenue, because of this challenge, have the money to be able to pay for groceries, to pay their rent, to support their families through this difficult time," said Trudeau.

The tax filing deadline is now extended to June 1, and anyone who owes money will have until August to pay their taxes, said Trudeau.

The GST tax credit will also be supplimented, and Canada Child Benefit payments will be boosted.

There will also be a six-month interest-free moratorium on Canada student loans.

Emergencies Act not needed at this time

On Wednesday, Trudeau said invoking the Emergencies Act is not neccesary, at this time, but it remains on the table.

"The emergency measures act is a significant step, not one that we feel we need today, but not one that we're closing the door to in the future," said Trudeau.

On Tuesday, three provinces declared states of emergency – B.C., Alberta and Ontario – as a way to better confront the challenge of COVID-19.

Trudeau also announced Tuesday that the government was examining the need for the Emergencies Act.