Efforts to conserve the local population of Oregon spotted frogs, the most endangered amphibian in Canada, took a leap in the right direction last week.
May 4, 2019 4:00 AM By: Jessica Kerr/Vancouver Courier 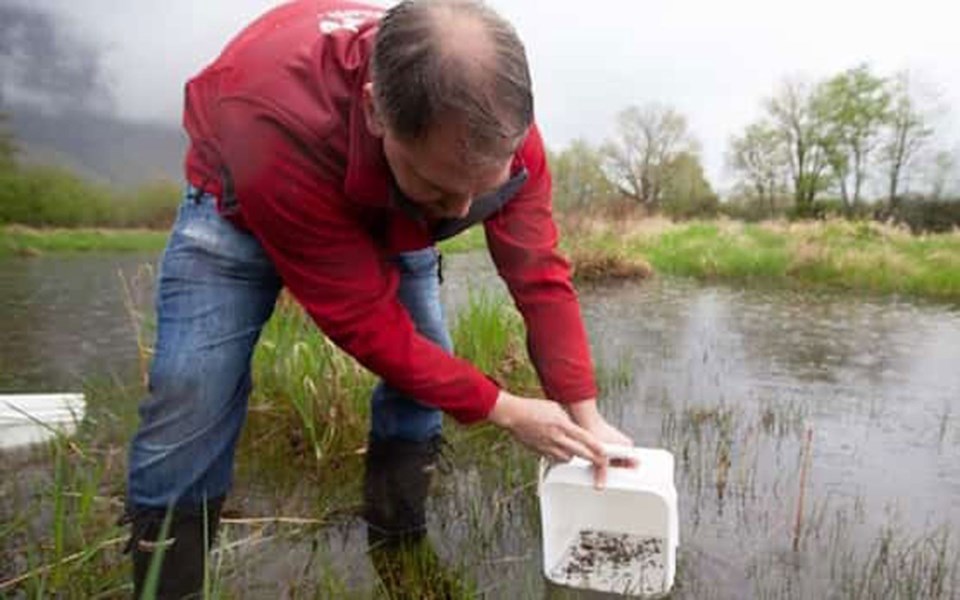 Efforts to conserve the local population of Oregon spotted frogs, the most endangered amphibian in Canada, took a leap in the right direction last week.

The Vancouver Aquarium April 23 transferred 1,400 tadpoles to the Fraser Valley—1,240 were released into a suitable native habitat while 160 were taken to the Greater Vancouver Zoo where they will continue to grow before being released this fall.

The aquarium has been working with Amphibian Ark and the Oregon Spotted Frog Recovery Team since 2010, raising and releasing more than 21,000 Oregon spotted frog tadpoles.

And this year the recovery team was promising signs with population increases at the release sites. Survey results are still coming in but early findings show juvenile and adult Oregon spotted frogs, as well as egg masses, at five of the seven release sites. With one site showing a record number this year.

At the aquarium’s release site, 23 juveniles and two small frogs were found. Four of the frogs were third generation frogs born in human care— a first-time discovery for the recovery team.

“The early results from this year’s survey are really encouraging,” Kris Rossing, senior aquarium biologist, said in a news release. “While the frogs are not of breeding age yet, this is a great indication that the tadpoles we’re releasing are maturing.

Early last century, there were hundreds of thousands of Oregon spotted frogs from norther California up into B.C.’s Fraser Valley. Historically in B.C., the frogs were found between South Surrey and Hope but numbers have declined as much as 90 per cent due to habitat destruction, the introduction of non-native species, such as Eastern Canada’s bull frog and reed canary grass, increased pollution and disease.

Oregon spotted frogs spend most of their lives in the water and require connected wetlands and floodplains for habitat.

Vancouver Aquarium joined B.C.’s Oregon Spotted Frog Recovery Team in 2000. A group of biologists and land managers in B.C. are coordinating efforts to conserve, manage and recover the Oregon spotted frog in Canada. And in 2007, the aquarium started collected the eggs to establish an aquarium-based assurance population. Three years later, in 2010, the aquarium became the world pioneer in breeding the Oregon spotted frog in human care.

“Every year we learn more about the species, including its reproductive needs, which helps us continually refine and optimize our breeding practices and contribute to the wild population,” Rossing said. “At the same time, more and more people are learning about frogs, the important role they play in the ecosystem, and how we all can help with conservation efforts. While the road to recovery for the Oregon spotted frog will be long, these results let us know we’re on the right path.”