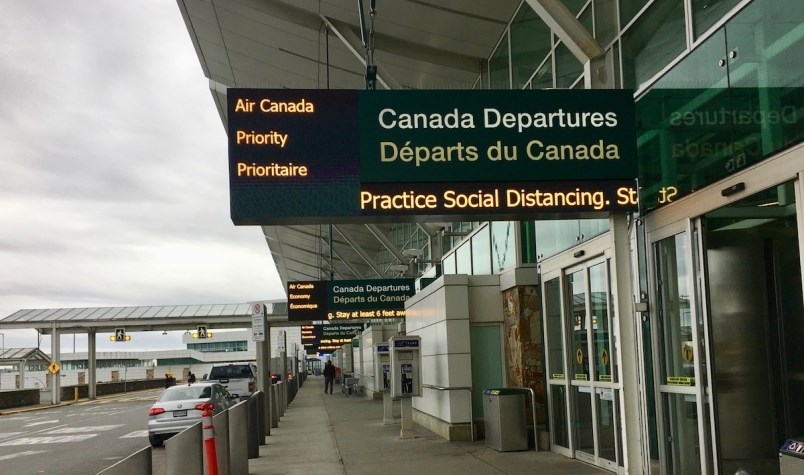 Passengers are now required not only to wear face coverings during flights but also in all public areas at the Vancouver International Airport (YVR).

These are part of the measures adopted by YVR’s new campaign, dubbed YVR TAKEcare, which aims to help people move safely through the airport with confidence and get ready for travel again when the government lifts boarder restrictions, according to Robyn McVicker, vice president of operations and maintenance for the Vancouver Airport Authority.

“Through this multi-layered program, our commitment goal is to create a safe and frictionless airport experience - from the curb to the cloud - so that passengers and employees feel confident while at the airport,” said McVicker.

Only travellers with valid flight tickets and employees are permitted to enter the airport. Hand sanitizer stations can be found throughout the airport. Passengers who might need help with safety measures can ask TAKEcare program members for help.

In addition, the airport is going to increase cleaning in all high-touch areas, and an immediate cleaning team will be sent out to sanitize all kiosks once the flight goes through, said McVicker, adding that visitors will also notice Plexiglas at counters.

The airport has been working with all governments, locally and around the world, to adopt a standardized approach to safety at the airport, added McVicker.

The airport traffic has plummeted since Mid-March given the travel restrictions, but McVicker noted they’ve seen some of this traffic recently come back.

“Air Canada and WestJet both increased flights for the summer. While passenger numbers are still low, I am happy to say that we have seen incremental growth every week. That’s encouraging.

“It’s really important we get the YVR hub back and operating. Now the new normal is going to be a different approach,” said McVicker.

- Mandatory use of face coverings at all times while in the public areas of the terminal;

- Travellers with a valid ticket and employees only allowed to enter YVR;

- Increased cleaning of all high-touch areas;

- Additional hand sanitizer throughout the airport;

- Physical distancing markers on the floor