Transport Canada reversed an earlier ruling that passengers could remain in their vehicles during sailings to prevent COVID-19 transmission
Sep 9, 2020 2:55 PM By: Carla Wilson 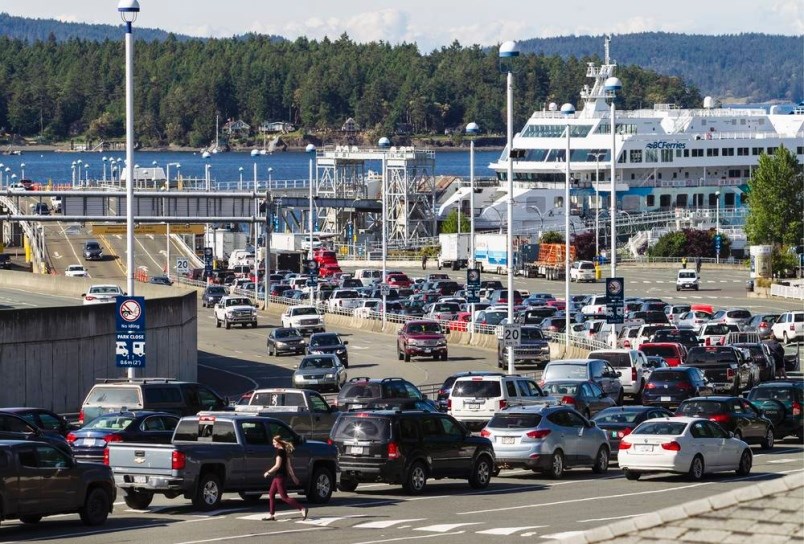 Vehicles line up for a B.C. Ferries sailing from Swartz Bay. Passengers will no longer be able to stay in their vehicles below decks, starting Sept. 30. TIMES COLONIST

B.C. Ferries passengers will no longer be allowed to remain in their vehicles on enclosed vehicle decks as of Sept. 30.

Transport Canada has reversed an earlier ruling that passengers could remain in their vehicles during sailings in an effort to stop transmission of COVID-19.

The federal department says the policy has changed because other anti-virus practices have been implemented. New safety protocols on ferries include additional cleaning, sanitizing, physical distancing and mandatory wearing of face coverings while at the terminal and on board vessels.

Areas that had been temporarily closed will also be reopened for seating, including space used by the Pacific Buffet, which is not returning at this time.

Mark Collins, B.C. Ferries’chief executive, said Wednesday that passengers are legally required to comply with the federal regulation. “We expect our customers to follow the law and we continue to have a zero-tolerance policy for abuse of any kind towards our employees,” Collins said.

Prior to the pandemic, passengers were not allowed to stay in vehicles in enclosed vehicle decks because of safety concerns.

“During the pandemic, these risks were mitigated with additional safety procedures and patrols.

“However, Transport Canada has now advised B.C. Ferries that measures have been developed and implemented to prevent the spread of the disease in all transportation modes and businesses across Canada.”

The federal department told B.C. Ferries “the marine safety case for ending the practice of permitting people to remain in their vehicles on enclosed car deck is clear.”

B.C.’s provincial health officer announced Tuesday that 429 new COVID-19 cases had been reported since Friday, for a total of 6,591 in B.C. to date. In response to rising case numbers, health officials ordered nightclubs to close and reduced hours for bars.

On the Horseshoe Bay-Langdale route, B.C. Ferries has approval from Transport Canada to allow passengers to remain on the main vehicle deck following modifications to the vessels and procedures, but that does not apply to any other routes.