The graffiti appeared days after Tk’emlups te Secwepemc announced it had located the remains of 215 children on the grounds of the former Kamloops Indian Residential School.
Jun 2, 2021 10:26 AM By: Kristen Holliday / Castanet 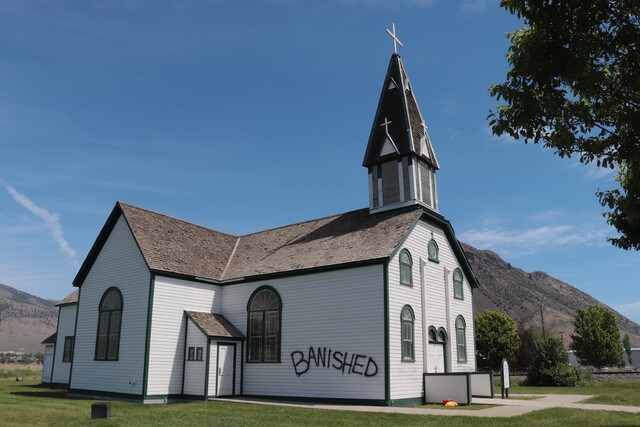 Graffiti was found on the sides of St. Joseph's Catholic Church on Monday.Kristen Holliday

Graffiti was found scrawled on the sides of the historic church on Monday morning, the words reading “banished,” “crime scene” and “evicted.”

In a statement, Casimir said the historic church, located in the Mount Paul area, was constructed “from the ground up by Tk’emlups te Secwepemc members.”

“We understand the many emotions connected to a Roman Catholic-run residential school,” Casimir said.

“At the same time, we respect the choices that Tk’emlups te Secwepemc ancestors made, over 100 years ago, to erect this church.”

The graffiti appeared days after TteS announced it had located the remains of 215 children on the grounds of the former Kamloops Indian Residential School.

The residential school operated between 1890 and 1978, run most of that time by the Catholic Church.

Kamloops RCMP confirmed investigators are looking into the vandalism.

Squamish Nation calls for all cemeteries and unmarked graves of Indigenous children to be identified
May 31, 2021 3:37 PM

‘This is a painful reminder': Carrier Sekani Tribal Council reacts to Kamloops Residential School discovery
May 31, 2021 10:35 AM

B.C. woman behind viral photo was given up for adoption to avoid being sent to Kamloops residential school (VIDEO)
Jun 1, 2021 4:22 PM
Comments