Small group of MPs take their seats in House of Commons after four main parties failed to reach consensus on how Parliament should function during pandemic
Apr 20, 2020 3:40 AM By: The Canadian Press / Glacier Media 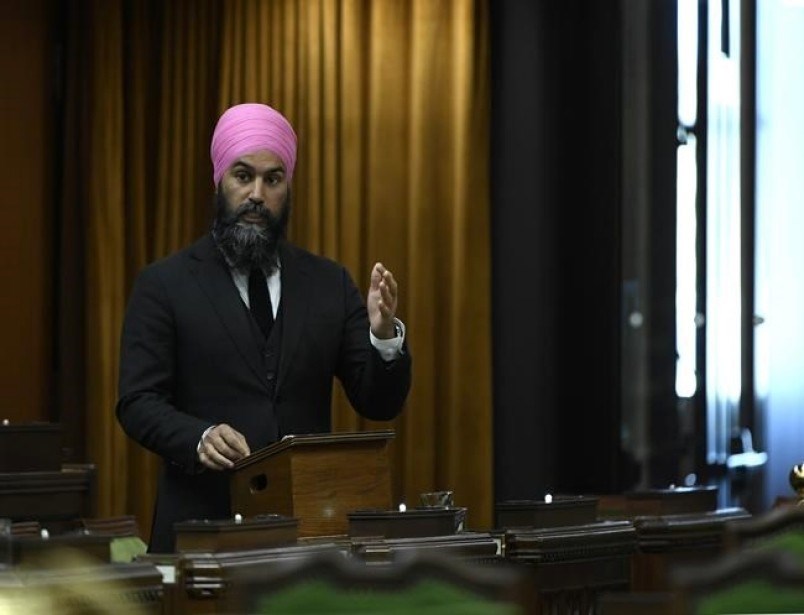 NDP Leader Jagmeet Singh rises in the House of Commons on Parliament Hill in Ottawa, as Parliament was recalled for the consideration of measures related to the COVID-19 pandemic, on Saturday, April 11. Photo by Justin Tang / The Canadian Press

A small group of MPs have taken their seats in the House of Commons after the four main parties failed to reach consensus over how Parliament should function during the COVID-19 pandemic.

The Liberals, NDP and Bloc Quebecois had agreed the House of Commons could convene for a weekly in-person sitting, but the Opposition Conservatives had said that was not enough.

Absent unanimity, Parliament was sent back to its normal routine, as that's what MPs agreed would happen on April 20 when they decided in mid-March to adjourn as the country began locking down to stop the spread of COVID-19.M

But MPs were to spend the bulk of Monday debating adjustments to that routine, with the Liberals turning the deal they'd reached with the Bloc Quebecois and NDP into a government motion. To pass, it just needs a majority of the small quorum of MPs present.

The motion includes the one in-person sitting a week, and also the creation of a special all-party COVID-19 committee that could meet more frequently. The House of Commons is also currently studying how to make virtual sessions work, and those would be added to the calendar when feasible.

Liberal House Leader Pablo Rodriguez said having in-person sittings more than once a week just increases the risk of spreading COVID-19, and the motion on the table makes sense for unprecedented times.

"We have found the balance between allowing Parliament to play its fundamental role, which we cherish ... while respecting what we ourselves have been saying to the Canadian public, which is to isolate as much as possible," he said.

Parliament has met twice to pass emergency aid legislation since it was adjourned in March, and some argue that the only reason MPs need to be physically present in the Commons now is to vote on any subsequent legislation.

But Conservative Leader Andrew Scheer said Monday morning the debate and discussion in the House of Commons are of urgent importance. They are seeking to amend the motion to include more in-person sittings.

The Liberals, he said, must answer questions on issues ranging from the state of the nation's medical-goods stockpile to accountability for the billions of dollars being spent in federal aid.

"Right here on Parliament Hill, construction workers are continuing to renovate Centre Block, a project that is expected to take at least 10 years," he said.

"If they can safely renovate the building that houses our Parliament than surely we can do our duty to uphold the bedrock of our democracy."

NDP Leader Jagmeet Singh said two virtual sittings of the committee of the whole per week can accommodate other needs.

Those virtual sittings would not only minimize contact, but also make sure people in regions far from Ottawa would be able to question the government.

"It's important to hear voices from parliamentarians across this country," Singh said.

Bloc Quebecois Leader Yves-Francois Blanchet accused the Conservatives of holding Parliament "hostage" for partisan reasons, and said he wants to get to the business of serving Canadians and the people of Quebec.

The Bloc said its priorities during the next sitting of the House is to promote the needs of seniors, and the NDP cited students who will be out of work this summer as one of their top concerns.

The Senate has adjourned until at least June 2, though several committees have plans to meet virtually and the full body can be recalled if legislation needs to be passed.

This report by The Canadian Press was first published April 20.