Hundreds turn out for anti-racism protest in Squamish Saturday 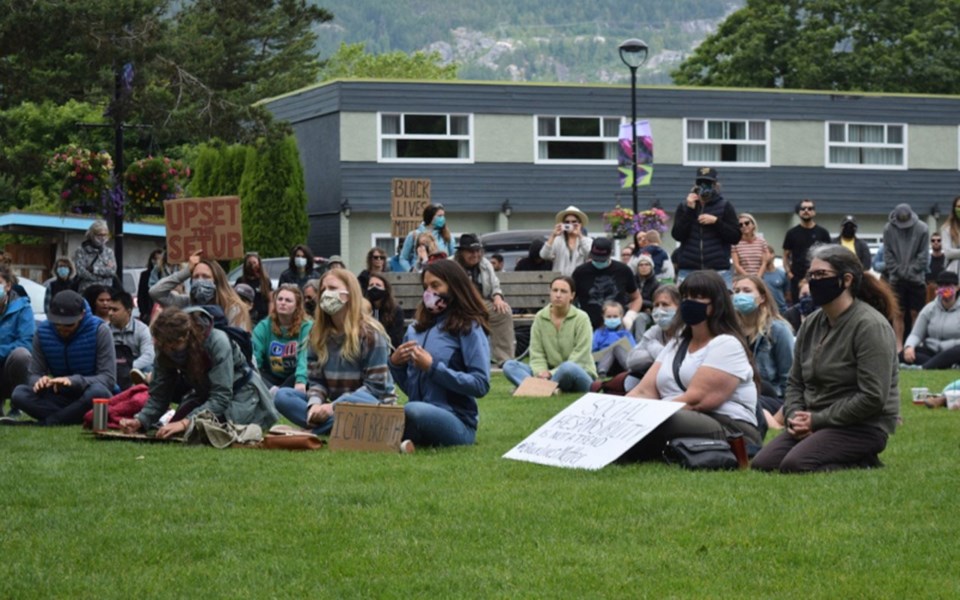 Hundreds gathered in front of O'Siyam Pavilion Saturday afternoon in downtown Squamish for the "Peaceful protest in support of George Floyd."

Unarmed and handcuffed Floyd, 46, was killed by a white police officer in Minneapolis, on May 25.

The death, captured on video, sparked protests around North America.

"The Black Lives Matter movement is based on the statement that Black people's lives matter and that is a pretty reasonable statement," said Squamish's Tallula Russell who described herself as mixed with a white mother and Black father. "But there are a lot of people, especially police officers and especially in the States who seem to not really follow that idea, or they are kind of spitting in the face of it, because — racism. That is not cool and there needs to be more action done to protect lives both from the police and in the police and outside of it. That work and that action aren't being taken... which is why all the protests in the States and outside of it are happening and that is why I stand in solidarity with these people who are being oppressed and justice isn't being served."

She said being Canadian in Squamish, she isn't afraid of the police, but said she shouldn't have to be.

Speakers at the protest described their own experience with racism in Canada.

Jahmar Armstrong described being a teen and going to meet the white and powerful father of a good friend.

When he told the man his name, the man said, "'Jahmar? What kind of stupid Jamaican name is that? I am going to call you Bill.' So for most of high school, friends in that circle called me Bill."

Armstrong said it is something they joked about at the time, but now sees in a different light.

"I can't help but think of just how wrong that was and how much I wish one of my friends really stood up and said 'No, we are not going to call him Bill.' That stuff goes on every day and it is small things like that that people like myself brush off and accept in order to thrive in this environment."

Armstrong and others reiterated how important it is to speak up when people see racism.

He also described being racially profiled as a young man.

Jazzamyn Walker spoke of various incidents of racism that she has faced and urged the crowd to educate themselves, contact representatives and support Black organizations and businesses.

She owns Saucestrap, which makes jazzy sunglass chains and accessories.

"In Canada, it is not just a fight for Black lives, it is a fight for Indigenous [lives] as well," she said, to a loud cheer from the crowd. "Just because we don't experience racism to the same extent as our brothers and sisters down in the United States, that doesn't mean it hurts us any less. We have to do better as a race — as a human race — to do right by our brothers and sisters. We need to come together and stop this violence."

One of the protest organizers, Rev. Karen Millard, thanked the large crowd for coming and said the event was "to acknowledge that we see and we hear and we believe that Black lives matter."

New daily COVID-19 cases ticking up in B.C.
Jul 14, 2020 11:44 AM
Man fatally shot in Vancouver but police say public is not at risk
Jul 14, 2020 10:55 AM
Comments
We welcome your feedback and encourage you to share your thoughts. We ask that you be respectful of others and their points of view, refrain from personal attacks and stay on topic. To learn about our commenting policies and how we moderate, please read our Community Guidelines.