In conversation with BC Liberal leader Andrew Wilkinson 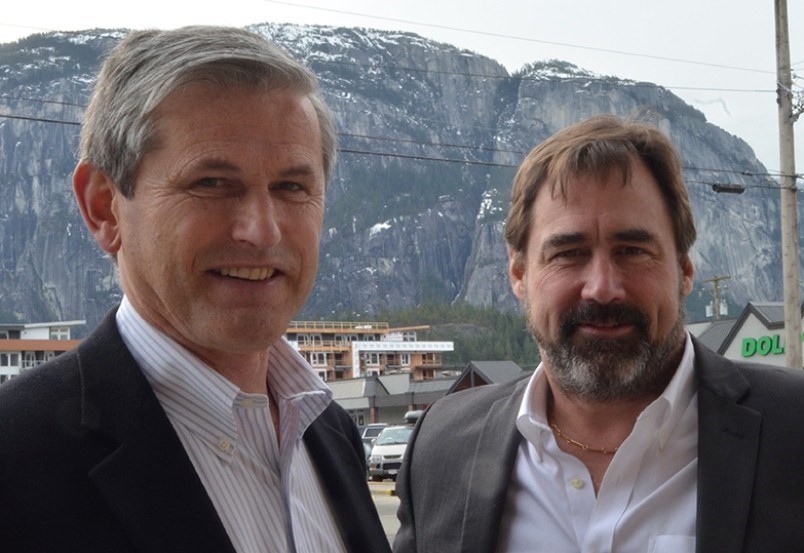 Squamish's identity, the legislature's spending controversy, the housing crisis and gas prices were among the topics broached by BC Liberal leader Andrew Wilkinson and local MLA Jordan Sturdy in a recent interview with Pique's sister paper The Squamish Chief.

The leader of the BC Liberals was in Squamish on Mar. 14 to discuss some of the most pressing issues affecting the town. He was scheduled to speak at a Rotary Club of Squamish event later that day.

However, before the event, Wilkinson, along with Sturdy, dropped by The Chief's office for a wide-ranging conversation.

The following includes highlights from the interview, which has been edited and condensed for brevity and clarity.

Q: What're you doing in Squamish? This is not really campaign season. Just hanging out?

AW: That's right—just hanging out. Why not? [laughter]

Q: How does Squamish specifically fit into the BC Liberals' plan?

AW: Squamish is diagnostic of so many things in British Columbia. It's a thriving community that's trying to make sure it retains a sense of community rather than become a commuter town. And this, I think, is the biggest question in Squamish right now—the identity Squamish wants to have 20 years from now. Because it's changing rapidly and we want to make sure it changes in a good direction.

Q: Right, and how do you make sure it changes in a good direction?

AW: Jordan has made it clear that having well-paying jobs here in Squamish is really important because otherwise you're at risk of becoming a commuter town.

Q: Are there any initiatives or things you can name, possible policies that would help realize that for Squamish?

Q: I know you've gone on the record walking back your comments in the legislature about renting being "fun" and "wacky" a little bit earlier. But what would you say to people in Squamish concerned over whether the BC Liberals have the sensitivity to navigate the rental challenges here?

AW: Rental supply is critically important, and especially in a place like Squamish. We see all the construction that's happening here. We've got to make sure there's a sufficient mix of accommodation so there are affordable rentals mixed in with the nice new condos. And that's the challenge for any government policies, is to make sure that there's a full range of accommodation available, so people who are in the rental market either as a phase of life or for their entire life have a choice of rental properties. Because if they don't, they get trapped in a place they may not be happy with and they can get caught in a rent squeeze. Because if there's limited supply, the rents are going up.

JS: And I have to say that Squamish has done a great job over the last number of years in making approvals. Look at what's going on around us. Look at all the multi-family that's being developed as we speak. And I think that does speak well to this community and this local government and it's recognition of some of the challenges and it's willingness to move things forward.

Q: Head clerk Craig James and sergeant-at-arms Gary Lenz were well known in the legislature. What was your impression? Did you see anything coming?

AW: The Lenz-James matter is now going to be reviewed by former Supreme Court of Canada chief justice Beverley McLachlin. And that's appropriate, because there's been a whole bunch of hearsay and conjecture tossed around about what might have happened and what should happen. And it'll be very refreshing to have a lucid, comprehensive review of this by someone who is beyond reproach.

JS: And who's really outside that environment.

Q: What was your working relationship with them?

JS: We saw each other in the halls. I think we were all familiar with each other. It's not a big building with a lot of people. It's relatively intimate. You get to know people.

Q: Would you guys see each other a lot?

AW: It was like your relationship with the principal at your high school. You were aware of them, knew their name and didn't deal with them unless you had to.

Q: Did they ever visit you guys at your constituencies? I know they were involved in a lot of tours. Did they ever drop by Pemberton or Quilchena?

Q: A lot of people, including people in Squamish, noted this alleged misspending happened when the BC Liberals were in power. Some might be saying that since you guys were in power, maybe you should've stepped up sooner.

AW: The spending patterns will be clarified by Madam Justice McLachlin as to what the facts are, because that's very unclear. And the key thing is that the BC Liberals are the ones who forced the management committee meetings to be held in the open. And it's now, I think, 10 years that both parties have been actively involved in management committees. The NDP and the Liberals were involved all the way through this story.

JS: I think it's important to recognize as well that it was under our previous finance minister the initiative pushed through that ultimately we were all going to have to, as elected officials, post all of our expenses. And that took place about four years ago or so. I think in retrospect, I'm certainly grateful that happened because it's entirely possible that we could all be implicated in this thing. Whereas, as elected officials on both sides of the house, everything I spend in my constituency office, everything I spend for travel —it is all posted online. You can have a look at everything that happens.

JS: We should have fuel prices about 14 cents a litre cheaper here in the Sea to Sky than in Metro Vancouver because we don't have a TransLink levy in the Sea to Sky yet. We've actually been monitoring—we take snapshots twice a week of all the fuel stations up and down the corridor and West Vancouver, because we're trying to track it to see what it actually looks like. Whether it's consistent in terms of differential. And it's not. But—is it 14.5 cents? Absolutely not. Like, never. In fact, more commonly it's within a cent or two.

Q: We've been talking about this with a lot of people and they keep kicking it over to the Competition Bureau. Is there anything the provincial government can do to alleviate this?

AW: Competition law under the Canadian constitution is a federal function. So there's a very limited role for the province to get involved in things like fuel pricing and alleged price fixing.

JS: I'm not sure anybody has actually put forward a submission to the Competition Bureau with comprehensive data. Which is exactly why we're doing it. Because we want to see if there's a differential and how it manifests itself. Without a good dataset it's hard to make an argument.