SURREY, B.C. — Car horns blared in support of B.C. Liberal Leader Andrew Wilkinson Friday as he spoke from a raised platform in a parking lot in one of the few events that resembled a political rally during the provincial election.
Oct 23, 2020 6:16 PM By: Canadian Press 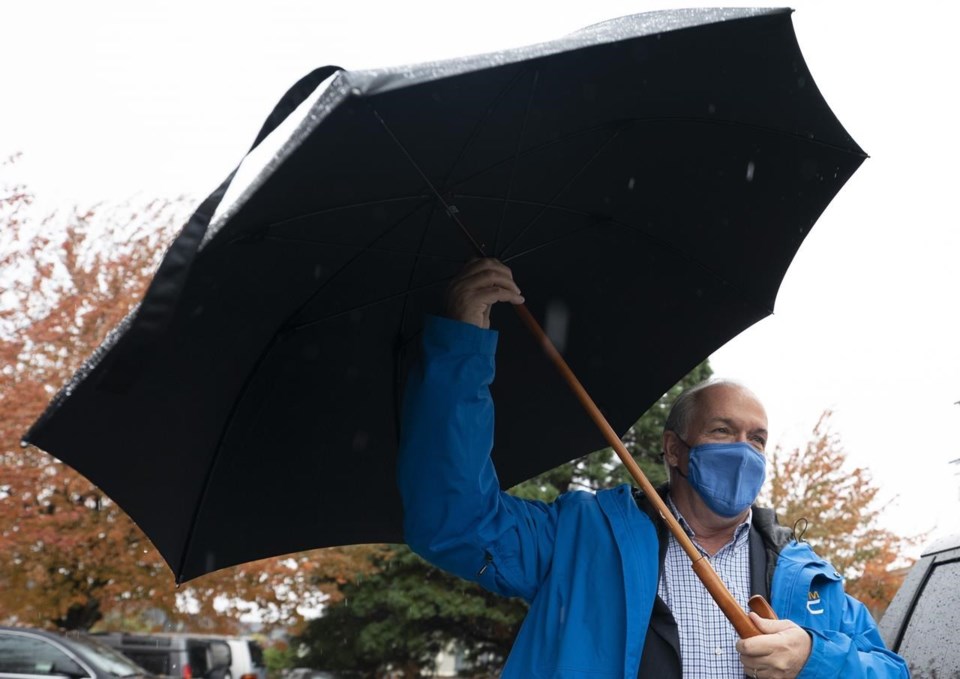 SURREY, B.C. — Car horns blared in support of B.C. Liberal Leader Andrew Wilkinson Friday as he spoke from a raised platform in a parking lot in one of the few events that resembled a political rally during the provincial election.

An online livestream of the event showed dozens of people in cars and trucks parked in front of the stage as Wilkinson wrapped up his campaign in Surrey.

Wilkinson was joined on stage by eight Liberal candidates, all wearing masks, who are running in ridings in the key Surrey-Delta area of Metro Vancouver.

"Let's make this election about change, about building a future, about restoring confidence in our people, about rebuilding B.C.," he said.

Wilkinson said the Liberals would eliminate the provincial sales tax for one year to stimulate the economy and provide tax credits to senior citizens so they can remain in their homes.

Horgan said the election during the COVID-19 pandemic is critically important.

Horgan was in New Westminster appealing for support in Metro Vancouver ridings that are expected to be key battlegrounds with the Liberals.

He asked undecided voters to consider the NDP and urged his party supporters to make sure they vote Saturday.

"If you don't vote, it doesn't count," said Horgan. "People need to get out and vote."

Green Leader Sonia Furstenau said people should vote for her party's candidates because they stand for community support and political responsibility.

"I encourage voters to go to the polls thinking about how we can best continue to move forward together," she said at a news conference in Duncan.

"Look at the representatives in your riding and see who best represents your values and will most faithfully represent your community, and vote with hope in your heart."

The Greens held two seats before the election, but their campaign has been resonating with voters, said Furstenau, who suggested the party will mount serious challenges in ridings in the Kootenays, Metro Vancouver and on Vancouver Island,.

She said another minority government or a strong opposition after the election would provide more balance in the legislature. The NDP's quest for a majority appears to be more about getting additional power, Furstenau said.

"That party is interested in what I think has become clear, the wrong thing in politics, which is power as opposed to responsibility."

Horgan said the COVID-19 pandemic and how B.C. gets through it have been his top priorities throughout the campaign and in the months leading up to the election.

"People are looking at the choices, what their options are," he told a news conference. "We can stick with a government that's focused on getting us through this, that has a track record."

Horgan said the NDP has promised to improve health care for older people by hiring 7,000 people to work in long-term care and will provide families with a $1,000 pandemic benefit payment.

— By Dirk Meissner in Victoria.

This report by The Canadian Press was first published Oct. 23, 2020.

B.C.'s top doctor emotional in offering condolences to families of dead
Nov 30, 2020 5:12 PM
B.C. says land registry is open and will increase transparency in housing market
Nov 30, 2020 2:13 PM
Surrey police investigating fatal shooting in Fleetwood
Nov 30, 2020 3:49 AM
Comments
We welcome your feedback and encourage you to share your thoughts. We ask that you be respectful of others and their points of view, refrain from personal attacks and stay on topic. To learn about our commenting policies and how we moderate, please read our Community Guidelines.