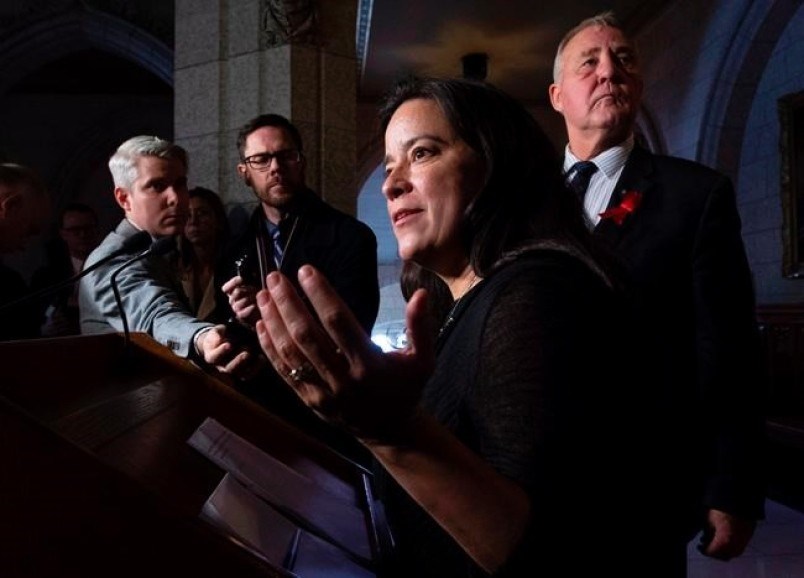 CHECK UP Minister of Border Security and Organized Crime Reduction Bill Blair looks on as Minister of Justice and Attorney General of Canada Jody Wilson-Raybould respond to a question about drinking and driving laws during a news conference in Ottawa, Tuesday December 4, 2018. THE CANADIAN PRESS/Adrian Wyld

Federal ministers are playing down the potential for racial profiling and civil-rights violations as they tout a strict new law intended to curb drunk driving.

Mandatory alcohol screening that takes effect Dec. 18 will allow police to demand a breath sample from any driver they lawfully stopÑa lower bar than the current threshold, which requires reasonable suspicion the person has been drinking.

The roadside test could justify further investigation, including more elaborate testing at a police station.

The government said the aim is to reduce carnage on the roads by helping police catch drivers with more than the legal limit of alcohol in their bloodstreams.

Justice Minister Jody Wilson-Raybould said Tuesday she has "every expectation" the new law would be challenged in the courts, but added she is confident it is consistent with the Charter of Rights and Freedoms.

"The intent is to save lives, and this is an incredibly justifiable purpose."

The Canadian Civil Liberties Association has expressed concern that mandatory alcohol screening will unfairly affect racial minorities who are disproportionately singled out by police for traffic stops.

Organized Crime Reduction Minister Bill Blair said if a police stop were motivated by bias, it would be unlawful and contrary to the charterÑand therefore a breath test would be inadmissible in court.

However, police could legally stop someone for speeding, going through a stop sign or as part of a holiday spot check program, Blair said.

"They would have to have a lawful reason to pull you over."

Research suggests that up to half of drivers with a blood alcohol concentration above the legal limit are not detected at roadside check stops, the Justice Department said. An average of almost four people die in Canada daily due to impaired driving, according to federal statistics.

People have come to realize they can bluff their way through spot checks if they deny drinking or disguise their breath, meaning police lack a reason to demand a test, said Blair, a former police chief.

The likelihood of someone getting caught for having more than the allowable limit of alcohol in their system is "about to increase exponentially" under the new law, he said.

Mandatory alcohol screening is currently in place in more than 40 countries, including Australia, France, Germany, Ireland and Sweden.

The first part of the legislation, dealing with drug-impaired driving, took effect earlier this year in anticipation of legal recreational cannabis use. It authorized police to use roadside oral fluid drug screeners and ushered in new driving offences of having a prohibited concentration of drugs in the bloodstream.

Officials said Tuesday, Dec.4, while there have been charges under the new drugged-driving provisions, no statistics are yet available.