MAP: This interactive map shows all of the earthquakes in B.C. this year

A 6.2 magnitude earthquake struck off the B.C. coast Wednesday, July 3 followed by a second earthquake with a 4.0 magnitude. However, a multitude of earthquakes hit the coast every year – but not all of them make headlines.
Jul 6, 2019 2:00 AM By: By Elana Shepert/ Vancouver is Awesome 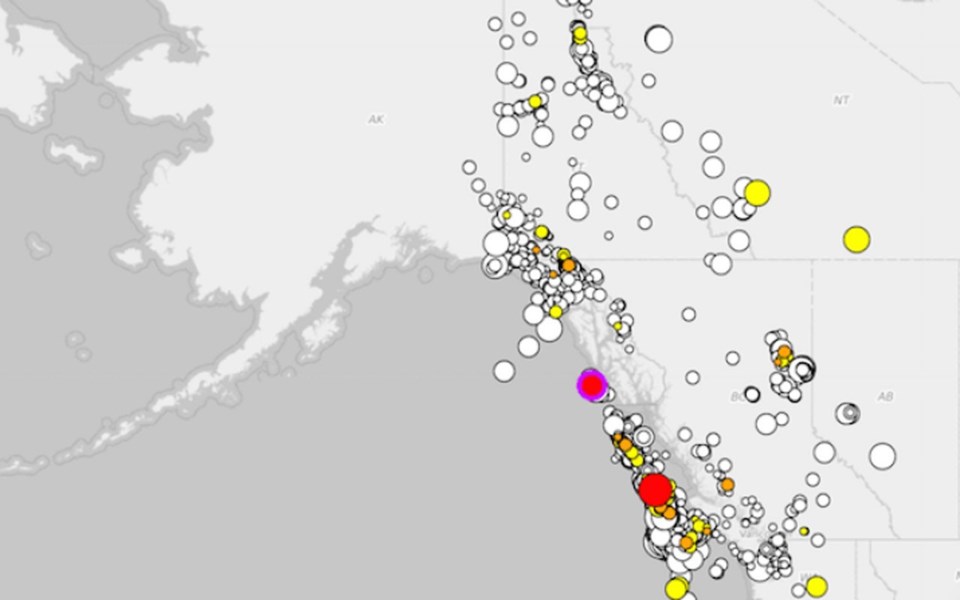 A 6.2 magnitude earthquake struck off the B.C. coast Wednesday, July 3 followed by a second earthquake with a 4.0 magnitude. However, a multitude of earthquakes hit the coast every year – but not all of them make headlines.

According to the Canadian Encyclopedia, a whopping 4,000 earthquakes take place across Canada every year. What's more, the B.C. coast is the most earthquake-prone region in the country. In fact, there is a minor earthquake almost every day in the Lower Mainland. And while the majority of these earthquakes are hardly felt, certain earthquakes pose a serious threat.

Of course, the biggest threat is the inevitable 'big one' – a catastrophic, powerful earthquake that would create a massive tsunami and kill thousands of people – but scientists aren't sure exactly when it will take place. And while it may not take place in our lifetime, it is important that residents, as well as the government, prepare for the possibility. The Insurance Bureau of Canada (IBC) conducted a study on the cost of a "megathrust earthquake" and calculated that it would be as high as $75 billion.

The City of Vancouver notes that people should, "expect damaged buildings and infrastructure, flooding, fires, and thousands of people forced from their homes." Further, transportation systems will be damaged, as well as electricity and telecommunications systems.

Having a well-stocked earthquake kit, and knowing where it's stored, is essential. Take into consideration your every day needs, from medication and contact lenses to feminine hygiene products and food and water. Don't forget your family pets; if you have four-legged friends to feed, be sure you have a plan in mind for getting access to their food in the event of an earthquake.

Earthquakes Canada owns and operates the Canadian National Seismograph Network and several special deployments, all of which are monitored from its data centres located in Ottawa, Ontario and Sidney, British Columbia. They have compiled the data from all of the earthquakes over the past year and formatted it into an interactive map. The map displays the latitude and longitude, as well as the date, depth, and magnitude of each earthquake.

Most Canadians support second lockdown if COVID-19 caseloads spike
Aug 4, 2020 8:11 PM
Comments
We welcome your feedback and encourage you to share your thoughts. We ask that you be respectful of others and their points of view, refrain from personal attacks and stay on topic. To learn about our commenting policies and how we moderate, please read our Community Guidelines.