In terms of mental health calls, 'We’ve asked the police to do too many things,' says expert 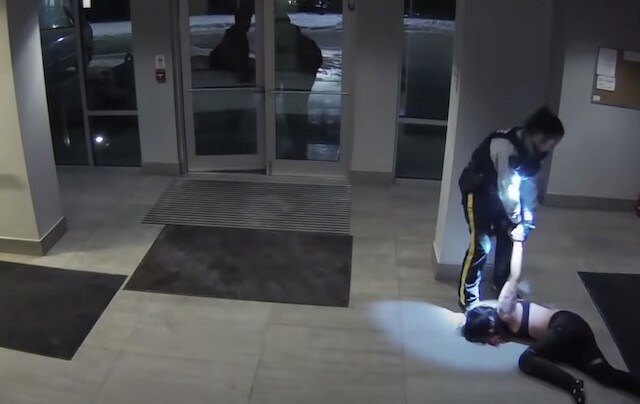 Police across the country have been put in an unfair position of responding to issues they simply are not equipped or trained for, according to one of Western Canada’s foremost criminologists.

But regardless, Dr. Kelly Sundberg of Calgary’s Mount Royal University says the conduct of Kelowna RCMP officer Const. Lacey Browning during a wellness check on a suicidal UBCO student earlier this year “doesn’t make any sense.”

“It's undeniable that there was pushing the head down with a boot, and that young woman was clearly unresponsive,” Sundberg said, referring to the surveillance footage of the wellness check released this week as a part of a civil lawsuit launched by the student in the video, Mona Wang.

“That video has gone viral, and it's yet one more video whereby the police’s actions caught on video become concerning to members of the public,” Sundberg continued.

It is not all that uncommon to have a lone RCMP officer be the first to attend a wellness check, he said, but ideally, that officer will call for an ambulance “or someone else more suited to address the problem if it's not an issue of crime.”

Larger centres, like Calgary, have teams consisting of a mental health nurse and RCMP officer who provide 24/7 coverage for mental health crises. A single similar unit exists in Kelowna, providing about 40 hours of coverage a week, but its expansion has been strangled by bureaucracy.

While police “absolutely” should be involved in mental health calls from a safety perspective, we shouldn’t be expecting them to take the lead, Sundberg said. People go to school for years to address mental health concerns, often obtaining multiple degrees, something that can’t be matched with additional training for officers.

“We’ve asked the police to do too many things. The police are addressing mental health, homelessness and all sorts of issues. It’s unfair to the police and frankly unfair to members of the public,” Sundberg said.

Policing in Canada needs to evolve

Sundberg is advocating for the creation of a regulatory college for police officers, similar to the bodies that oversee a wide variety of professions ranging from nurses and doctors to lawyers and engineers.

If a member of the public has a complaint about, for example, a pharmacist in B.C., the B.C. College of Pharmacists will investigate to ensure the profession’s standards are met and can strip the pharmacist of their right to practice if they are not.

Sundberg suggested there is no reason police oversight can’t be managed the same way.

“We are seeing a need to have the profession of policing truly advance,” he said, adding he is a large supporter of the current discussion in Alberta to create a provincial police force.

He explained the idea of "defunding the police" is about reallocating resources to free up funding for social workers and public health nurses. "Education, healthcare and social services are the best crime prevention."

RCMP Commissioner Brenda Lucki said this week members respond to 10,000 mental health calls a month across Canada, a figure that has been growing rapidly.

"When I think of the defunding, I think more about funding all social services," Lucki said, adding many smaller communities have no social social services, meaning police will always be the first to respond.

"So it's not about defunding. It's about funding everything that goes along. And I think we can work better with our mental health practitioners," Lucki told a House of Commons committee.

Sundberg said Mona Wang’s lawsuit over Const. Lacey Browning’s wellness check on her will result in "a lot of head scratching, wondering what the hell was going on there.”

“Is that the commonplace for people that are suicidal, for police officers to push their head into the ground with a boot?” Sundberg asked.