A North Shore mama bear is taking on a Kardashian. "I'm going to war," asserts Tamara Komuniecki.
May 8, 2019 6:05 AM By: Maria Spitale-Leisk / North Shore News 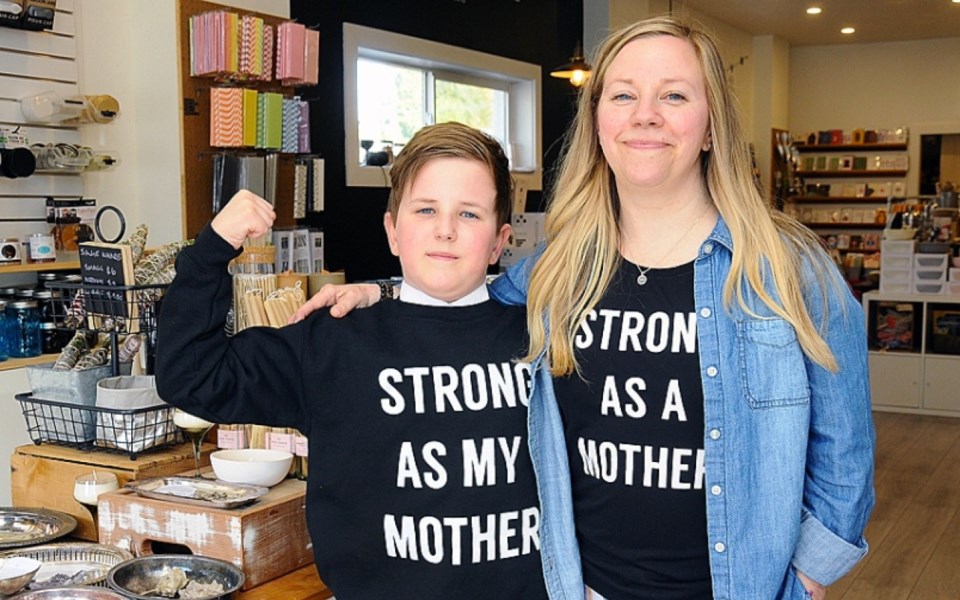 A North Shore mama bear is taking on a Kardashian.

The Edgemont Village entrepreneur discovered this week that Good American, a clothing company co-owned by Khloe Kardashian, is selling shirts bearing the same slogan Komuniecki has used for years on her merchandise.

"Strong as a Mother" is trademarked in Canada by Komuniecki, but not in the U.S. The North Van mom and business owner knew it was a matter of time until someone else jumped on the slogan, but she wasn't expecting it to be one of the Kardashians.

"That was a shocker," says Komuniecki.

As she explains, Komuniecki bought the Canadian rights to "Strong as a Mother" three years ago from a Vancouver mom who had created some workout gear boasting that mantra.

Since then, Komuniecki has sold "Strong as a Mother" T-shirts and sweatshirts online and through close to 40 retailers in Canada, the U.S. and Australia. The clothes are also available in Komuniecki's Edgemont shop, Delish General Store, as well as in Whistler boutique 3 Singing Birds.

Komuniecki says she built the brand's following mostly through Instagram.

"A lot of reaching out through influencers who are moms and sending samples," Komuniecki explains, adding a "couple of A-list movie stars" also sport her gear.

Partial proceeds of some of Komuniecki's products support charitable causes and non-profit organizations, including the Down Syndrome Diagnosis Network.

After seeing Good American selling "Strong as a Mother" T-shirts online, Komuniecki says she is not lawyering up but rather taking her fight to the court of public opinion.

An "army of moms," supporters of Komuniecki, have taken to Good American's Instagram page to express their disappointment.

Active COVID-19 infections in B.C. continue to fall as recoveries top 7,000
Sep 25, 2020 3:51 PM
Comments
We welcome your feedback and encourage you to share your thoughts. We ask that you be respectful of others and their points of view, refrain from personal attacks and stay on topic. To learn about our commenting policies and how we moderate, please read our Community Guidelines.