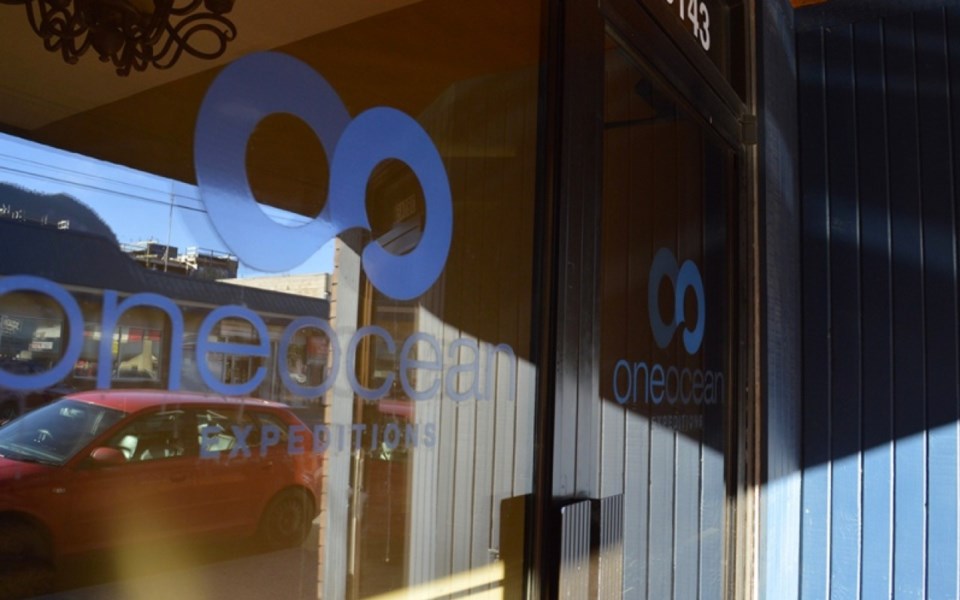 One Ocean's office was dark and unoccupied on the morning of Nov. 6. It's been this way since the company announced it was restructuring on Oct. 29. PHOTO BY STEVEN CHUA

The restructuring of Squamish company One Ocean Expeditions has left some of its employees, customers and sponsorship recipients wondering about their money.

A spokesperson for the Ministry of Labour said the branch could not provide further details, as the investigation of these complaints is ongoing.

Recently, The Vancouver Sun, CBC News and the PEI Guardian have said that One Ocean's remaining ship, the RCGS Resolute, was forced to dock in Buenos Aires in late October after a cruise trip to Antarctica was cancelled.

As of press deadline, the ship was still moored at Buenos Aires, according to vesseltracker.com.

Here in Squamish, the company's office on Second Avenue has gone completely dark. The Chief has gone by daily to check, but no one has been seen in the bureau since the restructuring was announced.

The Chief reached out via email, telephone and Facebook and checked the office in person.

As of press time, the company's office phone was not being answered, its voicemail was full and the cell number for the general manager has gone offline.

In May, two ships that One Ocean leased from Cyprus-based company Terragelida were withdrawn from service as a result of a financial dispute.

After the restructuring announcement in October, some One Ocean customers and employees say they have been left in the dark.

Igor Bratnikov paid for two tickets collectively valued at US$29,980 for a trip to Antarctica in December.

Bratnikov, a resident of Boston who booked through a travel agency, said he hasn't received any word about what will happen to his dream voyage, which he's spent years saving for.

He said he's worried he may lose the money spent on the trip.

"It's kind of a nightmare, because you just have no idea what is going on, because there's just no information at all," he told The Chief.

"It makes me sick for this whole situation."

One Ocean hasn't contacted him or his travel agency, he said.

As of Nov. 4, the company was still taking trip bookings on its website.

Michael James worked for the company as a line cook on an on-and-off basis from July 2017 to March 2019 and says that One Ocean still owes him about US$4,500.

Email exchanges between him and the company provided by James show that company representatives have acknowledged James hasn't received his pay, but do not indicate when the money will come.

"I have a lot going on right now. Squamish is not cheap to live in and I'm going to be out of work for the next couple months after my surgery, so I need this money."

The head of the Royal Canadian Geographic Society, or RCGS, says his organization typically receives support from One Ocean, but the company's restructuring has put a question mark on that relationship.

"They have committed to sponsor events for which they have not been able to, at this point, follow through with payment," said John Geiger, the CEO of the RCGS.

He wouldn't disclose the size of the payments due, but said, "We definitely are owed money and we're hurting."

"This is a company that's historically been a very good supporter of ours," Gegier added. "I can only say I'm very hopeful that they are able to get things back on track."

The society has a co-branding agreement with One Ocean that allows some trips to be called an RCGS co-branded voyage.

One of the company's ships, the RCGS Resolute, was given its namesake as a thank-you for the support the society has received from One Ocean, Geiger said.

The society, however, does not own the ship nor have any responsibility in the operations of One Ocean, he said.

Geiger said he hasn't heard anything from the company beyond the public restructuring announcement posted online.