Opinion: Firing of Don Cherry was ‘inevitable,’ says man who hired him 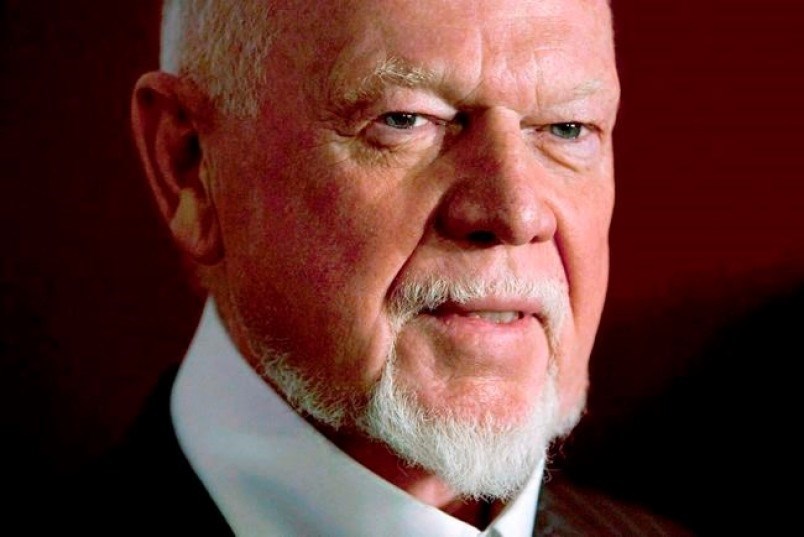 Hockey commentator Don Cherry is shown in Toronto on February 15, 2011. Cherry says he's frustrated about the lack of visible poppies being worn by new Canadians ahead of Remembrance Day. THE CANADIAN PRESS/Darren Calabrese

Even the Brentwood Bay man who put Don Cherry on Hockey Night in Canada figured he would get himself fired one day.

Cherry finally went too far on Saturday. Or maybe he went too far once too often. During his regular Coach's Corner rant, the loved-or-loathed Cherry went beyond his usual Tim Hortons brand of patriotism and lit into new immigrants for not, as he saw it, embracing Remembrance Day. "You people ... you love our way of life, you love our milk and honey, at least you can pay a couple bucks for a poppy or something like that," he said.

No evidence to back it up, no mention of non-immigrants who don't wear poppies, just a xenophobic smear letting "you people" know that they aren't really welcome here.

No one backed him up this time, not even sidekick Ron MacLean. On Monday, Sportsnet-which took over Hockey Night from CBC five years ago-decided that it was Cherry himself whose welcome had worn out.

Was anyone surprised? Certainly Devion wasn't, given the 85-year-old Cherry's history of inappropriate comments. "It was inevitable that one of these remarks would eventually force his employer to let him go, despite the reality that on several occasions Coach's Corner drew a larger viewership than the game they were watching," Devion said Monday, reached while passing through New York.

Some in Victoria will remember Devion as the former CBC television executive who came out of retirement to lead the network's host broadcaster unit during the 1994 Commonwealth Games. But back in 1980, he was the boss of CBC television sports, including Hockey Night In Canada.

At that time, Devion was troubled by the number of viewers tuning out between periods. As a solution, the network tried bringing in a string of guest in-game analysts, including former Boston Bruins coach Cherry at the suggestion of executive producer Ralph Mellanby. Cherry was paid something like $50 a pop.

To gauge viewer reaction, Devion would duck into a bar near the CBC's Toronto studios. "I would rush down at the end of the period and sit in the back of that bar and notice that whenever this particular guest came on, everybody would start watching again," he told the Victoria Times Colonist's Cleve Dheensaw in 2012.

"Don was nervous on-air at first, but I thought to myself: 'This guy has a gift ... he has that X-factor.'"

And the rest, as they say, is history. Such was Cherry's notoriety/appeal that when asked to vote for The Greatest Canadian in 2004, television viewers elevated him to seventh place (though, as the CBC's Justin McElroy tweeted on Saturday, the list also included "Mike Myers at 20, a Winnipeg radio DJ at 34, WWF wrestler Bret Hart at 39, Tim Horton at 59, the person who was serving as auditor general at 66 and Ed Belfour at 79").

"Viewer's either loved him or hated him, but like waiting for a crash in a Formula One race, they all watched waiting for it to happen," Devion wrote from New York on Monday. "There is no doubt Don Cherry is a hockey icon, an entertainer, a bombastic showboat who always wore his emotions and opinions on his sleeve, unable to edit his words before they exited his mouth."

Yes, but that was the problem, wasn't it? Or maybe it was that those unedited opinions were what Cherry actually meant. And once Hockey Night In Canada put this fire-breathing locomotive on the tracks, allowing Cherry to turn a job as a between-periods hockey analyst into a bully pulpit, it had no idea how to derail him.

As he became a caricature of himself-the suits and voice both louder, the mangled rants more predictable-you got the feeling that Sportsnet was holding its breath, hoping to find a way to ease him out the door semi-gracefully before he did something that would force its hand. Just last week, Cherry enraged viewers by laughing during a segment in which an Ottawa Senators player was stretchered off the ice. At least that transgression was hockey-related.

Devion, having known Cherry as a human being, not a two-dimensional TV character, believes Cherry's good side-the time and money he has quietly poured into a variety of charities, his unswerving support for veterans and first responders-should be recognized.

"I wish him all the very best and sincerely hope the Order of Canada committee can put politics aside and give him this honour before he passes," he wrote.