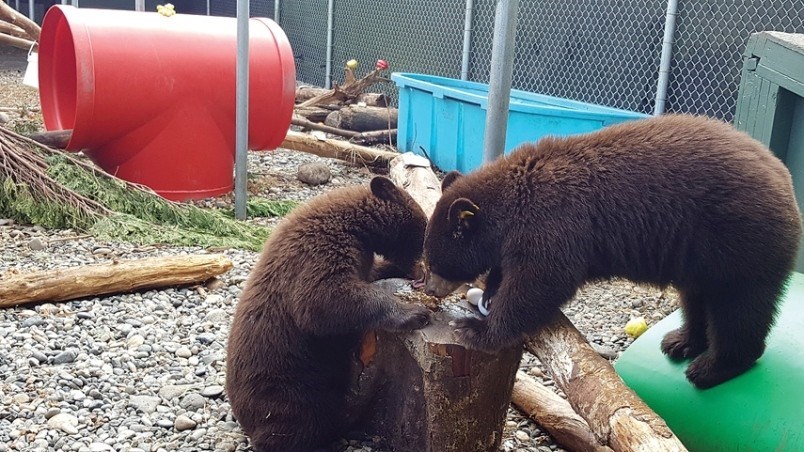 The killing of a mother bear in May, leaving her two cubs orphaned, was a call to arms for Blueridge area residents of North Vancouver who are raising awareness on how humans can co-exist with these large mammals.

Marci Deane lives in the cul-de-sac where the mother bear was hanging out – looking for food. She wasn’t home when it happened, but Deane’s neighbours told her they heard the shot.

The day the conservation officers came to hunt down the mother bear, Deane seemed to sense they were after the sow and, in the end, it took them the better part of a day to find her and shoot her, Deane explained. The reaction from the neighbourhood was visceral.

“Most people had seen that mother bear,” Deane said. “She was killed because of us.”

For six months of the year, adult bears are foraging for food, and at their peak, they forage up to 20 hours a day to fulfil their needed daily quota of 20,000 calories before they settle for their long winter’s nap.

The mountains along the North Shore are bear country, and these lumbering animals often wander into residential neighbourhoods looking for a cheap meal – this is why wildlife experts urge humans to make sure their garbage is securely locked and out of the reach of bears, because, as the saying goes: “A fed bear is a dead bear.”

The two orphaned bear cubs, since named River and Seymour, were taken to Critter Care Wildlife Society in Langley, one of only four animal rehabilitation centres in the province that takes in bears.

The day after the cubs were rescued, Deane sent out an email to the local neighbourhood Block Watch, appealing to her neighbours to help fundraise for River, the female cub, and her brother Seymour. People started showing up at her door with cash donations. After a couple days, $900 had been dropped off, and then Deane and her husband gave $100 to make it an even $1,000 donation collected from the few streets around her.

“I think it was an emotional reaction by the neighbourhood – we were so horrified,” Deane said. “They killed her … all because she ate garbage that people left out.”

Fall is the time when there are the most human-bear interactions. Bears are in a state of “hyperphagia” at this time of year, when they need large amounts of food and water per day before they go into hibernation for the winter.

Deane said it is frustrating when she sees people putting their garbage bins and recycling put out the night before for the bears to rummage through.

“If they find food, they keep coming back,” said Luci Cadman, a Blueridge resident and volunteer with the North Shore Black Bear Society.

Cadman moved from England to Canada three years ago, and she wanted to live near nature. Little did she know she was moving into a “black bear hot spot” in Blueridge. Since then, she’s been involved with the North Shore Black Bear Society, and she wants to help educate the public on how to stop black bears from becoming habituated to humans.

After 39 bears were killed in 1999, the North Shore Black Bear Network was formed that same year with a goal of reducing the number of bears destroyed in the area. In 2005, network volunteers formed the North Shore Black Bear Society to provide a unified voice and to allow liability insurance to be purchased for those who are involved in educating and advising residents about bears.

Still, last year 18 bears were put down on the North Shore; across B.C. that number was 602.

People need to be educated on how to co-exist with bears – bears will normally hide from humans, often going up into a tree to avoid being detected when they hear or see them, Cadman explained. But if they get mixed messages, like people trying to take pictures of the bears with their cellphones, or garbage readily available to feast on, the bears will get used to being around humans and will lose their “natural wariness,” she explained. That’s when they will stay in neighbourhoods, not avoid people and are deemed too habituated.

“We need to make sure we don’t invite wildlife into residential areas,” Cadman said, adding that bears are good for the ecosystem and most people want to continue to co-exist with them. “People don’t want to see these bears killed.”

According to Reinsma, both the bear cubs “bawled” for the first week they were at Critter Care because of the stress and uncertainty of having lost their mother. They eventually came out of their den to explore their new temporary home.

River and Seymour have been joined at Critter Care by a third cub, Cedar, who came from Whistler Mountain after her mother was electrocuted. All the cubs will be cared for until the spring when hopefully they will be released back into the wild.

The Whistler Mountain cub has integrated with the pair and took an especially liking to Seymour, following him around, Reinsma explained.

Two full-time staff are needed to look after the cubs, although they try to keep human contact as low as possible so that they don’t become habituated to people. Caring for the bear cubs is expensive, with the cost expected to be about $50,000.

They need expensive milk formula and food – it costs $85 per day to feed one bear cub. There are also vet bills that need to be paid and two staff who will care for them as long as they are at Critter Care.

After hibernation, when they wake up, there will be a lot of costly wear and tear on their enclosure.

After their initial adjustment, the bears have made Critter Care their home and are eating and growing, said the animal refuge’s president, Maureen Binnie.

“The bears are doing great – they’re little kids that like to get in trouble,” she said.

River has been characterized by Critter Care staff as being quite feisty with a big appetite, despite being the smaller sibling.

Extra measures are taken to make sure the bears will be ready to be out in the wild when they are released next year. The public is not allowed to see them, and when their enclosure is cleaned, the cubs are isolated and talking around them is prohibited.

The bear cubs eat about three 20-litre pails of fruits, vegetables and fish per day. Sometimes, their caregivers hide food behind and under logs, so the cubs have to search for it.

Binnie said when people complain that bears are in their backyard, they should realize they are actually in the bears’ backyard.

This is the 16th year Binnie has been involved with the society.

“These critters are my life – I love them,” she said. “I’ll do anything within my power to help them.”

Critter Care is looking for corporate and individual sponsorships through its Sponsor a Bear Cub campaign, and its goal is to raise $50,000. So far, they’ve raised $6,000 in corporate sponsorship with an Instagram contest. Throughout the month of October, Critter Care Wildlife Society will be posting pictures of River and Seymour on Facebook and Instagram to promote their fundraising campaigns.