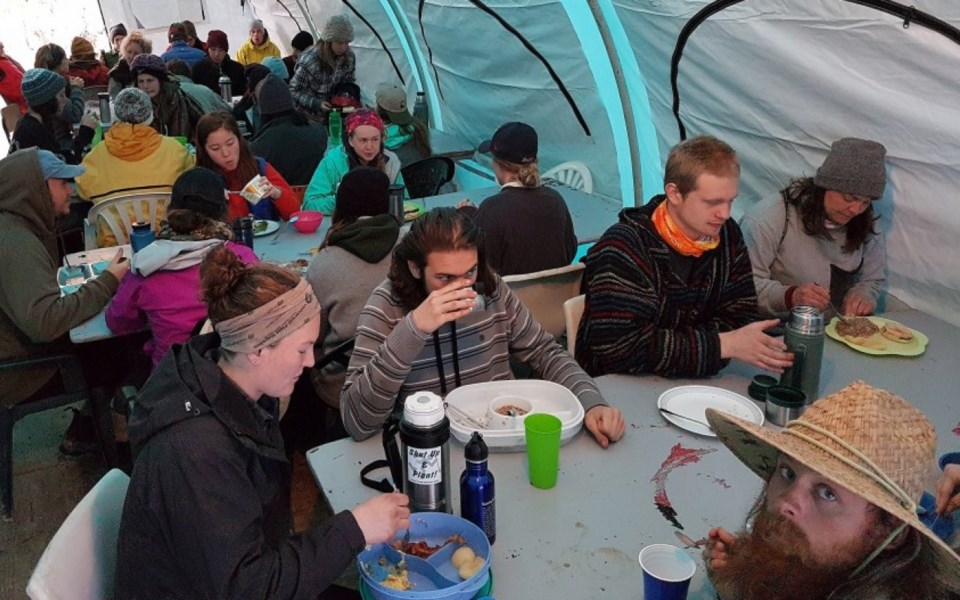 Tree planting companies will need to rotate planters in and out of mess tents to avoid crowding | Photo: Replant.ca

First, B.C.'s Interior forests were ravaged by beetles and forest fires, and now their recovery may be delayed by a virus.

This year's tree planting season in B.C. was expected to be the biggest planting effort ever, thanks to provincial and federal funding.

But tree planting companies were delayed in getting contracts signed this year as they waited for direction from public health officials on how to keep workers safe in remote work camps during the COVID-19 pandemic.

Even though they now have those guidelines, and some planters have headed into the woods, this year's season may not be as big or as profitable as silviculture companies had hoped.

At least one Interior First Nation has banned tree planting in its territory.

Some companies may have trouble attracting new planters, and others may struggle with the added costs of meeting new health and safety guidelines in remote work camps.

Thanks to additional funding from provincial and federal governments, 2020 was supposed to break a record.

There is joint provincial-federal funding this year for tree planting through the Low Carbon Economy Fund, which will be followed by funding through the Justin Trudeau government's $3 billion commitment to plant two billion trees over the next 10 years.

More than 300 million seedlings were expected to be planted this year, with 240 million to 260 million in the Interior in April through June.

"Many of those seedlings will be going into restoring terrible fire years that we had in 2017 and 18," said John Betts, executive director of the Western Forestry Contractors' Association.

A big season for tree planting would be timely, given that so many university students who might typically work at restaurants for the summer will likely be without a job.

Although tree planting contractors prefer to use experienced workers, there is always a need for new planters. About a quarter of the workforce each year is made up of new recruits, Betts said.

Betts said some companies fear some of their tree planters will sit this season out and collect the Canadian Emergency Response Benefit (CERB).

Companies that do manage to recruit a full complement of planters will face a lot of added costs to comply with health regulations. Planters typically work in work camps and cram into mess tents for meals and into trucks to get to their work sites.

That will no longer be allowed. Meal schedules for workers may have to be staggered, and once workers are in camp, they won't be allowed to visit local towns, as they might normally do, when they have a day off.

"The camps are going to run seven days a week, which they've never done before, which means more staff, etcetera," said Chris Akehurst, a retired former owner of A+G Reforestation.

"The biggest hangup for contractors has been the uncertainty of taking the risk to go out there and potentially getting your camp shut down, before you've planted the trees, because any trees you don't plant you don't get paid for."

Tree planting companies also face the prospect of having to pay workers who come down with the sniffles and are forced into isolation, for fear they might have COVID-19. Typically, planters don't get paid if they don't work, but all employers are now expected to provide sick pay.

There's also uncertainty now about planting in areas where First Nations communities are pulling up the drawbridges.

The Nadleh Whut'en, in B.C.'s Fort Fraser region, last week announced it would ban tree planters from its territories.

"My government cannot support industrial activities in our territory that disregard our health safety protocols, compromise the safety of our people, threaten our natural ecosystems and ignore our cultural values and practices," Chief Larry Nooski said in a press release.

"Therefore, no tree planters will be allowed in Nadleh Whut'en traditional territory until we are completely satisfied that the COVID-19 pandemic no longer poses a threat to our lives."

Despite all the challenges that the silviculture industry faces this year, Betts said some planting is now getting underway.

"We're going to salvage a lot of the season, if everything goes as planned. But nothing has gone as planned yet."

Take a step back from social interactions, says B.C.'s top doctor
Oct 23, 2020 4:34 PM
Comments
We welcome your feedback and encourage you to share your thoughts. We ask that you be respectful of others and their points of view, refrain from personal attacks and stay on topic. To learn about our commenting policies and how we moderate, please read our Community Guidelines.