Animal life in the world's oceans will drop steadily and consistently as the climate warms, a Canadian-led study suggests. "What we see is pretty consistent," said Derek Tittensor, a biologist at Dalhousie University in Halifax.
Jun 12, 2019 8:00 AM By: The Canadian Press 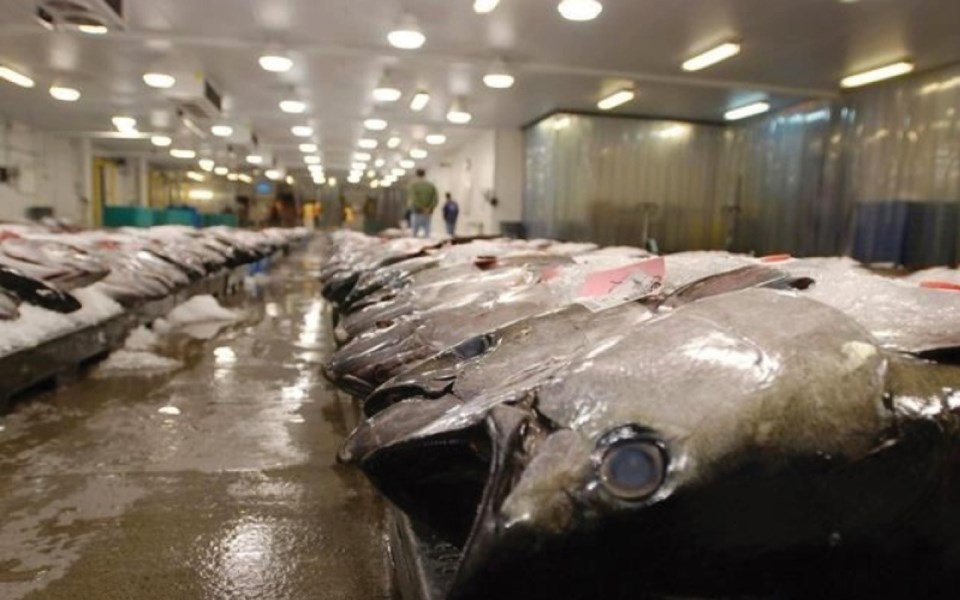 Tuna caught by foreign fishermen aboard American boats are lined up at the Honolulu Fish Auction at Pier 38 in Honolulu on March 23, 2016. A new Canadian-led study suggests that ocean abundance will drop steadily and consistently as the climate warms. The study, published today, used a series of marine climate models to predict what will happen to the crucial global food source under different amounts of warming. THE CANADIAN PRESS/AP, Caleb Jones

Animal life in the world's oceans will drop steadily and consistently as the climate warms, a Canadian-led study suggests.

"What we see is pretty consistent," said Derek Tittensor, a biologist at Dalhousie University in Halifax.

"For every degree of warming, we project a five per cent decline in the abundance of animals. The warmer it gets, the more the decline."

That means that the world's oceans are on track to lose about 17 per cent of their productivity by 2100 if there are no significant reductions in greenhouse gases.

The study found the impact of climate change is so strong it almost doesn't matter if commercial fisheries are included in the calculation. The results are nearly the same.

The research, published Tuesday in the Proceedings of the National Academy of Sciences, combined six marine ecosystem models with global ecosystem models and emissions projections. Tittensor said that produced a comprehensive projection for the oceans similar to what already exists for the continents.

"There are winners and losers," he said.

Arctic seas are expected to become more productive in a warmer world. Waters northeast of Greenland could have 50 per cent more animals by 2100, the study suggests.

But the great majority of the world's oceans will be less abundant. If greater efforts aren't made to rein in emissions, almost all mid-latitude and tropical seas will produce between 25 and 50 per cent less.

The report's conclusions have been tested against actual data on fish stocks. The predicted results and the measured trends agreed.

For example, they increase metabolism, which forces fish to burn more energy just staying alive and leaves them less for growth. As well, warmer ocean water mixes less, which slows the cycling of sea floor nutrients needed by the tiny plants at the root of the ocean's food web.

The decline in sea life will be concentrated in larger fish, which tend to be the ones humans rely on for food.

"The species that we have a real interest in are likely to be those that are more susceptible," said Tittensor.

United Nations figures suggest 10 per cent of the world's people depend on fisheries for their livelihoods. They say 4.3 billion people rely on fish for at least 15 per cent of their animal protein.

"But we're in a world that's heading towards 10 billion people and the oceans are hugely important in terms like food security and making sure we can feed people.

"Any kind of climate impact is another stress upon the oceans over and above the other stresses they're experiencing."

Some of the changes are inevitable. Greenhouse gas levels in the atmosphere already guarantee a certain level of warming.

Tittensor said studies such as his will help managers plan for the changes.

"We can try and adapt to this effect."

And, he added, we can always try to reduce it as much as possible by cutting carbon emissions.

"The future's not fixed," Tittensor said.

"We know the climate's changing and we know that is going to have consequences. We can move toward reducing our greenhouse emissions.

"We have things we can do. We can tackle this."