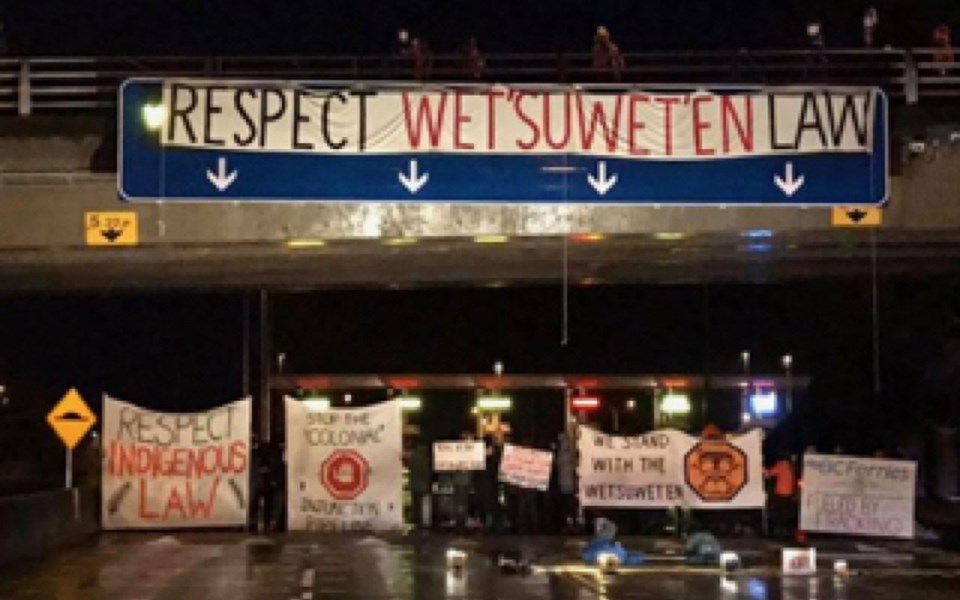 Protesters block access to the Swartz Bay ferry terminal on Monday, Jan. 20, 2020, in response to a call to action by some Wet’suwet'en First Nations members who are against a Coastal Gaslink project. Photo by Anna Gerrard

Protesters blocked access to B.C. Ferries' Swartz Bay ferry terminal this morning, delaying the 7 a.m. sailings to the Lower Mainland and Gulf Islands to support Wet'suwet'en hereditary chiefs in northern B.C. and their objection to a natural gas pipeline through their territory.

The protest blocked Highway 17 underneath the Lands End overpass near the ferry terminal.

There were also kayaks in the water blocking the vessels, according to B.C. Ferries.

Organizers said the protest would end around 9 a.m.

B.C. Ferries says its sailings from Swartz Bay to the Gulf Islands are slowly getting back in service. The 7 a.m. sailing to Tsawwassen from Swartz Bay left 70 minutes behind schedule while the 9 a.m. has been cancelled. Meanwhile, ferries leaving around 9 a.m. include the Mayne Queen from Otter Bay, the Queen of Cumberland from Swartz Bay, and the Salish Raven from Village Bay.

The "call for action" by "grassroots organizers" blocked the sailings "to demand respect for Wet'suwet'en sovereignty and oppose the threat of a violent RCMP invasion," organizers said.

B.C. Ferries sailings were disrupted with many holding in dock including the Coastal Renaissance, Spirit of Vancouver Island, Mayne Queen, Queen of Cumberland and Salish Raven.

B.C. RCMP spokesman Cpl. Chris Manseau said Sidney-North Saanich RCMP are on the scene. "Everybody has the right to protest. It's a very fine line. Obviously this is a very contentious issue."

Vehicles on the stretch of highway leading into the ferry terminal are backed up. A sign on the overpass reads "Respect Wet'suwet'en." Other signs read "Stop Colonial Injunction Pipeline; We Stand With the Wet'suwet'en." Up to 100 people are involved.

The protesters say the blockade is in response to a recent call from the Wet'suwet'en for solidarity actions that "shut down rail lines, ports, and industrial infrastructure".

At issue is the proposed Coastal GasLink pipeline that would span 670 kilometres across northern B.C., starting near Dawson Creek and extend to an export terminal at Kitimat. It is at the centre of a current injunction dispute.

The Coastal GasLink is part of a $40-billion LNG Canada project and is vital to the region's economic future, said B.C. Premier John Horgan at a news conference last week.

Horgan said last week the pipeline will be built despite the objection of hereditary chiefs from the Wet'suwet'en Nation near Smithers who say the project does not have their consent.

Horgan told reporters that all the permits are in place for the project to proceed and it has received approval from 20 First Nations along the pipeline route. "The courts have confirmed this project can proceed and it will proceed."

Kolin Sutherland-Wilson, a spokesperson for the protesters at the ferry terminal, said B.C. has regressed.

"If Indigenous governments are going to be criminalized on their own ceded lands, that's not reconciliation," said ... "Things are just so blatantly going backwards we have to get out and do what we can."

The protesters say they have targeted B.C. Ferries "because of the corporation's deepening integration with the Liquified Natural Gas industry."

B.C. Ferries has proposed 'upgrades' to two of its ferries that will make them reliant on the product that Coastal GasLink threatens to bring through Wet'suwet'en territory, says the group in a news release.

To view the original version of this story, click here.