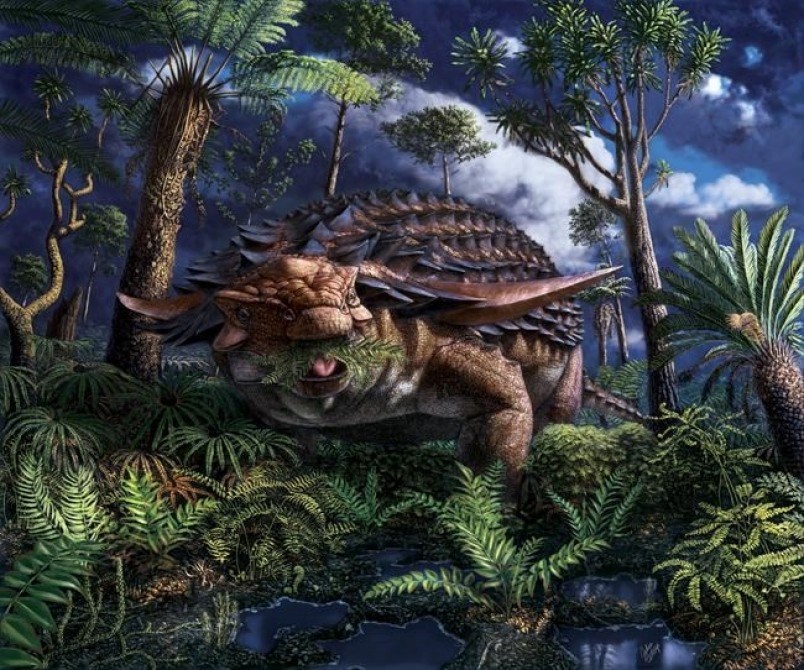 An ankylosaur eats ferns in a handout illustration. Fresh ferns, loaded with spores, lightly dusted with leaves and twigs and perfectly seasoned with locally sourced charcoal. Sound good? It did to an ankylosaur about 110 million years ago, as evidenced by amazingly complete fossils of what was certainly the tank-like dinosaur's last meal. THE CANADIAN PRESS/HO-Royal Tyrrell Museum of Palaeontology

Sound good? It did to an ankylosaur about 110 million years ago, as evidenced by amazingly complete fossils of what was certainly the tank-like dinosaur's last meal.

"It's pretty exciting," said Caleb Brown, a curator at the Royal Tyrrell Museum of Paleontology and co-author of a paper published Tuesday, June 2, on what is one of probably only three fossilized dinosaur stomachs discovered.

"We can start reconstructing the life histories and ecologies of these animals."

The dining dinosaur was first unearthed in 2011 in a northern Alberta Suncor oilsands mine, where many excavators have learned to look for fossils as they dig. When this one turned up, a crew from the Tyrrell followed shortly afterward.

It was an amazingly well-preserved ankylosaur from the early Cretaceous period. Low but large-the species could reach eight metres long and weigh eight tonnes-the fossil took two weeks to remove.

It then took 5 1/2 years for technician Mark Mitchell to clean and prepare it, which is why the species now bears the Latin name markmitchelli. The restored specimen, complete with body armour and outer skin, was remarkable enough for a 2017 National Geographic magazine feature.

But for paleontologists, the fun was just starting. They began looking at a fossilized structure that co-author Jim Basinger of the University of Saskatchewan described as looking like a "squashed basketball."

It was in the right place for a stomach and it held gastroliths, small stones dinosaurs used to help digest their food, much as some birds do today.

"There's a great mess of them and they're quite distinctive," said Basinger.

The scientists eventually compiled 16 pieces of evidence that the squashed basketball was, in fact, a stomach.

There are only two other fossilized stomachs in the world that scientists are this sure about. Neither opens doors to the past the way this one does.

About 80 per cent of this last meal was a particular species of ferns. The fossils are so well preserved their spores identify them.

There are bits of other plants and twigs so immaculate that their growth rings are being used to estimate weather at the time. And there is charcoal from burned woody material.

Brown points out ferns aren't that nutritious. A beast this size would need digestion capable of getting the most from them.

That means this dinosaur may have fermented its food, much like many animals today.

"All big herbivores today use some form of fermentation," Brown said. "For this animal, it was almost certainly fermenting those ferns."

Which raises other interesting questions: How much fermented fern does it take to move an eight-tonne lizard? How much energy might it need? Where might that much fodder be found?

The charcoal provides a clue. It probably came from an ancient forest fire where ferns would have been abundant in the first flush of new growth, much as they are today.

"(The dinosaur) was taking advantage of a charred landscape," Basinger said. Many modern animals do the same, chowing down on tender, nutritious and low-hanging new growth that follows the flames.

More than just reassembling skeletons, modern paleontology is starting to rebuild ecosystems that haven't existed for millions and millions of years.

"That's something we can start playing with," Brown said.

The fossils tell individual stories, too.

Basinger said, given the undigested contents of its stomach, this ankylosaur died quickly. It was surrounded by marine fossils, and researchers believe it slipped or fell into a large river, where it drowned and was swept out to sea.

"Whatever happened to the poor dinosaur, it would have happened pretty fast after it had eaten."

New daily COVID-19 cases ticking up in B.C.
Jul 14, 2020 11:44 AM
Man fatally shot in Vancouver but police say public is not at risk
Jul 14, 2020 10:55 AM
Comments
We welcome your feedback and encourage you to share your thoughts. We ask that you be respectful of others and their points of view, refrain from personal attacks and stay on topic. To learn about our commenting policies and how we moderate, please read our Community Guidelines.