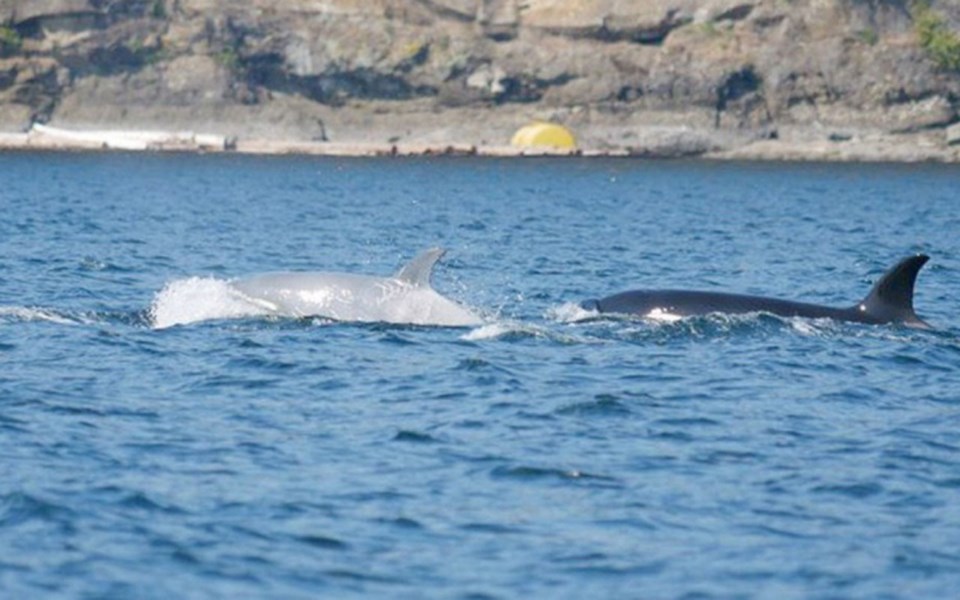 A pale grey orca travels off Nanaimo with a member of its pod. Photograph By VANCOUVER ISLAND WHALE WATCH

Its name could use a bit of marketing work, but a pale grey orca calf known simply as T46B1B is causing quite a stir off B.C.’s coast.

Vancouver Island Whale Watch has been inundated with interview requests since snapping pictures of the transient killer whale near Nanaimo on Tuesday.

“What happened was the naturalist, Val Watson, took a couple of photos of these whales and was looking at them and thought there was some trick of the light happening, because one of the whales looked really white,” said company owner Jilann Campbell.

Watson soon realized that it was no trick. “There were 10 people on board and everyone just went nuts,” Campbell said. “It was pretty much the most exciting tour we’ve had for the whole season.”

Jared Towers, a whale expert with the federal Department of Fisheries and Oceans, said he began receiving reports and pictures of the pale-coloured whale on May 17. He now has photos from about six people.

The department has known about the calf’s existence, but not its rare colouring, since last fall, he said. “It was first photographed at the end of November, but the lighting was so bad that day … you couldn’t see that the animal was actually pale in colouration.”

Towers said there are a number of possible explanations for the whale’s colouring.

“We have had a couple of killer whales that have been documented over the last 20 years that have come out looking a little pale, and as they grow this pale colouration completely disappears and they turn out to be regular black and white orcas,” he said.

On the other hand, the whale could have a rare genetic condition known as Chédiak-Higashi syndrome, which results in partial albinism and other complications, including a weakened immune system.

A young white orca captured near Victoria in 1970 suffered from the condition and died in captivity.

“But it doesn’t mean that all white killer whales have this condition, because we do know of some adults that have been alive in the past,” Towers said.

It could be the whale has leucism, which is found in many species and results in partial pigment loss, he said. If that’s the case, the whale might well survive into adulthood.

Towers said T46B1B belongs to a well-known family of transient killer whales— the whale’s great-grandmother is still alive—so researchers will continue to track its progress.

“I certainly look forward to my next encounter with the T46Bs, because I know this little guy will be in there with them,” he said.