Former B.C. cabinet minister’s earlier testimony to Cullen money laundering probe appears to clash with comments he made to media 10 years ago.
May 6, 2021 12:11 PM By: Graeme Wood 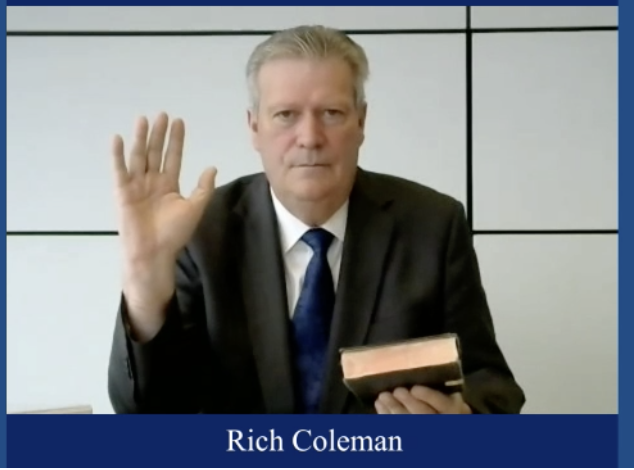 Former B.C. gaming minister Rich Coleman is being asked to testify again to the inquiry into money laundering in B.C.Submitted

Former B.C. deputy premier Rich Coleman will return to the province’s money laundering inquiry May 14, after providing testimony that seemingly contradicted statements he made to media in 2011.

The Commission of Inquiry into Money Laundering stated Wednesday that Coleman would return for one hour, but provided no specific reason.

Coleman was at the centre of controversy in November 2010 when independent reporter Sean Holman questioned him at the B.C. legislature on the disbandment of the Illegal Gaming Enforcement Team (IGET) in 2009. In January 2011, CBC News reported on RCMP Insp. Barry Baxter’s concerns and assessment of money laundering activity in casinos, which would have been Coleman’s responsibility at the time. Baxter was in charge of the B.C. Integrated Proceeds of Crime (IPOC) unit, which appeared to take over some responsibilities from IGET.

At the commission on April 28, Coleman dismissed Baxter’s concerns, as he did in 2011.

“OK. You didn’t speak with others at RCMP?” asked Martland.

Yet, as CBC reported, Coleman had said, in 2011, he did not “agree with” Baxter and that he’d gone to Baxter’s superiors.

“I don’t agree with him and neither do all the superiors of his in the RCMP and that’s why I said to them, ‘OK, guys, we’re gonna have a look at this. These comments came from you. I want them backed up,’” Coleman told CBC in 2011.

IPOC was shut down as well under Coleman’s watch, although the inquiry has heard this was a federal decision.

Retired Mountie Fred Pinnock, who led IGET until it was shut down, has alleged Coleman and those senior RCMP officers were complicit in allowing money laundering in casinos.

Last Friday, former Minister of Public Safety and Solicitor General Kash Heed testified against Pinnock’s claims, although he had to admit that he called RCMP top brass “puppets for Coleman” because Pinnock recorded him saying so in a private conversation.

Heed explained to the commission that his “puppets” comment, in 2018, was not an indication of his views in 2009 and 2010, when Pinnock alleges he initially made such comments. Heed said his views had been shaped over time by media reports on money laundering in casinos.

The inquiry has not heard from those top RCMP officers who were apparently in communication with Coleman. Baxter has testified that following his CBC interview he received an “unusual” call from his senior officer and then E-Division Deputy Commissioner Craig Callens, who told Baxter to “know your audience.”

Many in the lower ranks, such as Baxter, Pinnock, other RCMP investigators and investigators at the Gaming Policy and Enforcement Branch, have charged that the provincial government and police response to the issue was poor.

What has not been specifically probed at the inquiry is the relationship and interactions between Coleman and those senior RCMP officers. Many RCMP officers below these senior officers, such as Baxter, Pinnock and other RCMP investigators, as well as investigators at the Gaming Policy and Enforcement Branch, have testified that the provincial government and police response to the issue was problematic.

The inquiry has heard how RCMP funding and deployment for such investigations was problematic, particularly between 2009 and 2015, when police finally came to the doorsteps of the casinos where bags of $20 bills totalling hundreds of thousands of dollars were routinely deposited with the alleged assistance of a transnational organized crime network.

The inquiry concludes May 14 with Coleman’s second day at the stand.