Populations are tending to level off for some schools
Jan 11, 2020 8:30 AM By: Keili Bartlett / Squamish Chief 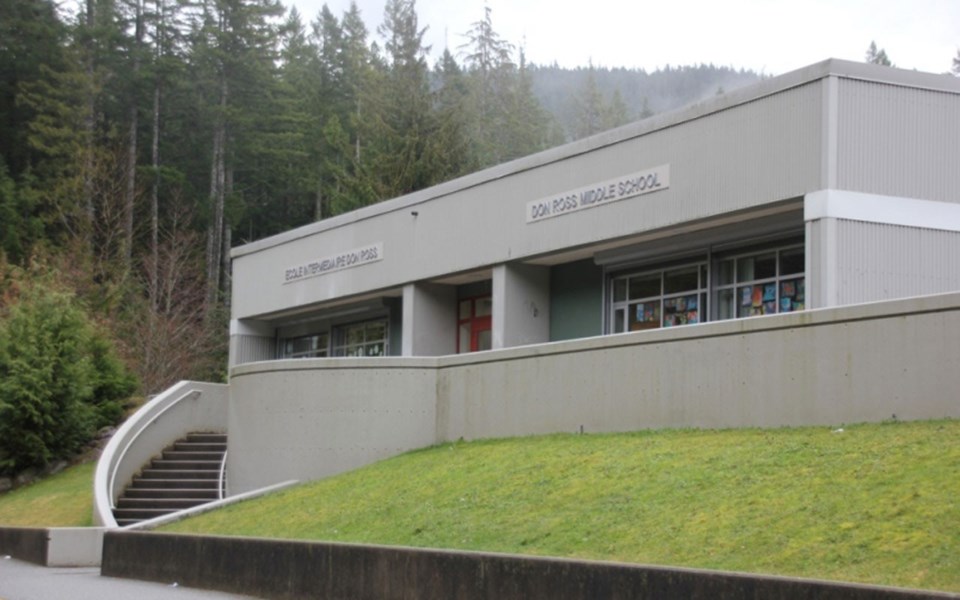 Don Ross Middle School and other Squamish schools are under review for capacity. Photo: FILE PHOTO

School districts across the province are calculating how many students they have, and if they have enough space they have to teach them in.

In the Sea to Sky School District, Squamish schools are under review first. At the Jan. 8 school board meeting, Mohammed Azim and Ian Currie presented enrolment projections for the next 15 years, and what they mean for the capacity in Squamish schools.

Ian Currie, the director of operations, said, "It appears that most of our schools are near or at capacity or over capacity. However, it also shows that the numbers are tending to level off a little bit for some schools. There are one or two exceptions. Many of our schools, it's not looking like we're going to be slammed, especially next year."

Nominal capacity is based on what a building was originally designed to hold, the number of students based on classroom size. Districts are determining working capacity based on new class sizes, renovations and spaces that could be used as short-term classrooms.

"This data shows us that for 2020 enrolment we should most likely be able to accommodate all the kids with the existing facilities we have," Currie said. "2021 and going forward, there's definitely going to be some serious pressure on one or two of our schools."

The board noted that the School District's IT department operates out of Stawamus Elementary School to maximize the use of the space.

Currie said while Garibaldi Highlands Elementary is currently over-capacity, it is able to handle students, and shouldn't require major changes because of a downward trend in enrolment. Previously, he said, Garibaldi Highlands Elementary hadn't been accounted for under the old nominal capacity, which the Ministry based on a former floor plan. Likewise, Mamquam Elementary School is expected to see a decline in enrolment.

As for Squamish Elementary, Currie said the school will be under pressure going into 2022, although it will be fine for the coming 2020/2021 school year.

Azim, the secretary-treasurer, added there hasn't been a year when the Squamish Elementary School's enrolment has stopped increasing.

At Don Ross, recent renovations have helped increase capacity, while enrolment continues to increase. In 2034, a high of 858 students is predicted, with an expectation of exceeding working capacity at the school by 2023. Currie said more analysis will be required.

School capacity and utilization rates can have an impact on capital planning and costs.

The board heard three options: adjusting the catchment boundaries; reconfiguring Don Ross Middle School from Grades 7 to 9 to Grades 6 to 8; and adjusting the French immersion program.

While adjusting catchment boundaries could have a short-term benefit for Squamish Elementary and Mamquam Elementary, geographical barriers could make it difficult. Azim said the priority is to ensure safety, especially in regards to the highway, rivers and rock formations that pose hazards to students en route to and from school. Currie said an adjustment would only affect around 20 students.

In regards to Don Ross Middle School, Superintendent Lisa McCullough noted there could be some educational benefits in adjusting the grades that attend, including access to consolidating mental health and addiction resources in the high school, and Grade 6 to 8 students being in a similar developmental stage.

As for French immersion, the options mentioned included introducing the program to all schools — a high-cost move, McCullough pointed out. Alternatively, there could be one French Immersion-only school, but that could require the construction of a new elementary school and trustee Celeste Bickford raised concern about segregating students. An option that did not receive a positive response was potentially dropping the program in Squamish.

During the presentation to the board, McCullough noted there are many more options they could pursue in the long-term. In March, the board will hear the impact analysis, options and recommendations. Plans would come back for consultation, and McCullough said there will be plenty of advance notice.

B.C. south coast still under snowfall warnings despite many waking up to rain
Jan 24, 2021 10:46 AM
Comments