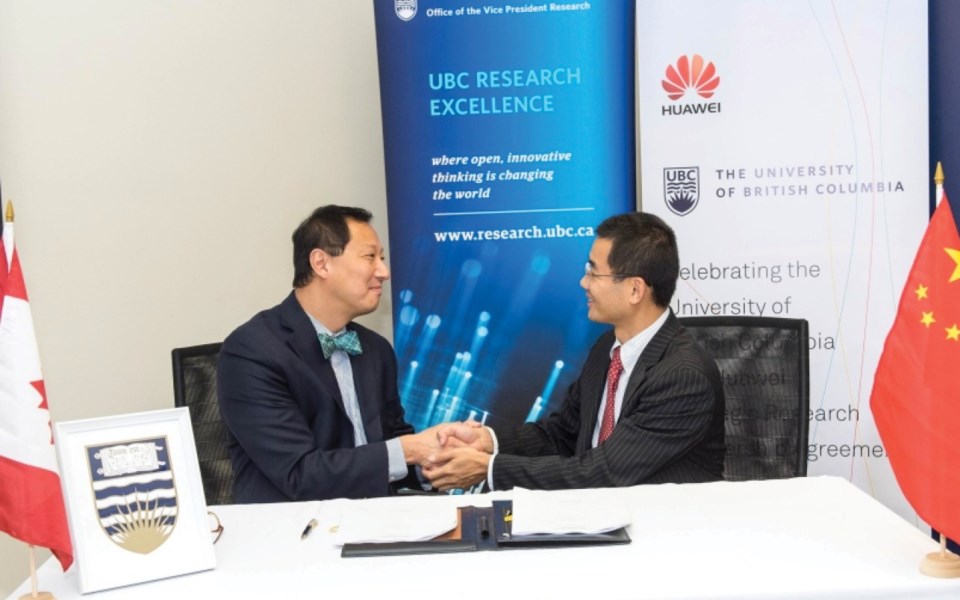 The granting of rights to the controversial company results from agreements under which Canadian universities receive millions in funding from the Shenzhen, China-based Huawei.

It's not unusual for corporate funders to reap the benefits of research, but it raises eyebrows in Huawei's case due to national security, political and communications ramifications involving Canada and other western countries.

Canada's relationship with Beijing has been strained for more than a year since the December 2018 arrest of Huawei chief financial officer Meng Wanzhou at Vancouver International Airport on a U.S. extradition request.

It is alleged that Huawei, under direction from Meng and other high-ranking company officials, sold telecom technology to Iran via unofficial subsidiary Skycom, in contravention of a 2009-14 sanction imposed by the United States.

Meng has denied the allegations.

Canadians Michael Kovrig and Michael Spavor were arrested in China days later under Chinese national security laws in a move widely considered to be retaliation for Meng's arrest.

The subsequent focus on Huawei intensified following revelations that several Canadian universities - including two in B.C. - have been accepting money from Huawei, despite repeated warnings about Chinese companies' possible involvement in state-sponsored espionage.

A Glacier Media investigation shows multiple Canadian research institutions have spent millions with Huawei for computing services. However, sleeping in a bed between its two elephant trading giants, Ottawa has not cautioned universities against working with Huawei.

Senior UBC officials visited Huawei's Chinese headquarters before accepting up to $3 million in investment from the company interested in the university's research in big data and fuel cell technology.

The research is through UBC's faculties of science and engineering, according to documents obtained through access to information legislation.

UBC Industry Liaison Office managing director John-Paul Heale said in an emailed statement that the agreement contains "standard clauses used in agreements of this kind and are not exclusive to Huawei."

In December 2018, UBC vice-president of research and innovation Gail Murphy said the university "is not aware of any restrictions regarding working with Huawei and will continue with its partnership with Huawei."

And, the agreement says, Canadian federal and provincial government and/or non-governmental grants will be used when possible to maximize scope of research. Specifically named are Natural Sciences and Engineering Research Council of Canada grants (NSERC).

"The company benefitted from the government funding via NSERC," said Margaret McCuaig-Johnston, a senior fellow with the China Institute at the University of Alberta.

And, the former NSERC executive director said, at least one university has gone back and tweaked its arrangement.

"They took a second look and made changes so there would be more compensation to the university and back to the researchers," McCuaig-Johnston said.

"National interest is key in this," she said. "I don't think we can any longer look at Huawei as we can at any other company."

However, explained Aiyaz Alibhai, an intellectual property lawyer and engineer with Vancouver's Miller Thompson office, the pursuit of governmental grants for research is common.

"The Natural Sciences and Engineering Research Council funds research and collaboration agreements with universities. All such agreements must comply with the intellectual property policies established by the NSERC for managing and sharing of IP and engagement with industry partners," Alibhai said.

Some of Huawei's funding to UBC is targeted to "broaden the awareness of Huawei research priorities to the university's professors and expose new areas of academic expertise to Huawei as possible research projects."

While intellectual property (IP) rights are to be determined on a project-by-project basis, Huawei would receive such deliverables as technical reports, technical samples, models, specifications, prototypes and samples.

Alibhai pointed to NSERC policies that said IP from research projects can be owned by any one, or combination, of the parties involved in and or supporting the research, depending on the policies of the academic institutions and or research agreements in place. Those could include open dissemination with no restrictions, non-exclusive licensing, exclusive licensing, joint ownership, partial assignment of ownership, or full assignment of ownership.

The university would not release the agreement without an access to information request being made.

"This allows the university to review the documents for any content that may be personal or proprietary and to formally notify the other parties of the agreement so they can also identify concerns about competitive information or other matters," a university media relations department statement said.

However, warning bells about dealing with Chinese high-tech companies have been ringing on the university issue for some time.

In a report prepared by academics and released by the Canadian Security Intelligence Service in 2018, it was reported that China uses commercial endeavours to advance regime goals.

"Whether a Chinese partner company is a state-owned enterprise of a private one, it will have close and increasingly explicit ties to the (Chinese Communist Party)," the report said.

"Unless trade agreements are carefully vetted for national security implications, Beijing will use its commercial position to gain access to businesses, technologies and infrastructure that can be exploited for intelligence objectives, or to potentially compromise a partner's security."

Indeed, Huawei has been specifically mentioned in one report.

China's ambassador to the UK, January 4 countered such concerns about Huawei supplying intelligence to Beijing on Twitter.

"China has never and will never ask companies or individuals to collect data, information or intelligence in others countries by illegal means," Liu Xiaoming tweeted. "Fabricating 'Huawei risk' in the name of national security is tantamount to giving a dog a bad name to hang him."

Canada is not the only country in which Huawei has made university investments.

It has collaborated with U.K. universities including Cambridge, Edinburgh, York, Cardiff, Imperial College London and Manchester.

A year ago, however, Oxford University suspended new sponsorships and donations from the company.

"The decision has been taken in the light of public concerns raised in recent months surrounding UK partnerships with Huawei," the BBC reported the university as saying.

Huawei did not respond to a request for comment.

B.C. has highest number of active COVID-19 cases in three months
Aug 11, 2020 4:51 PM
Comments
We welcome your feedback and encourage you to share your thoughts. We ask that you be respectful of others and their points of view, refrain from personal attacks and stay on topic. To learn about our commenting policies and how we moderate, please read our Community Guidelines.