A film class from West Vancouver is trying to figure out what is fact and what is fiction in the legends surrounding Indian Arm’s Wigwam Inn.
Nov 15, 2018 4:00 AM By: Maria Rantanen / North Shore News 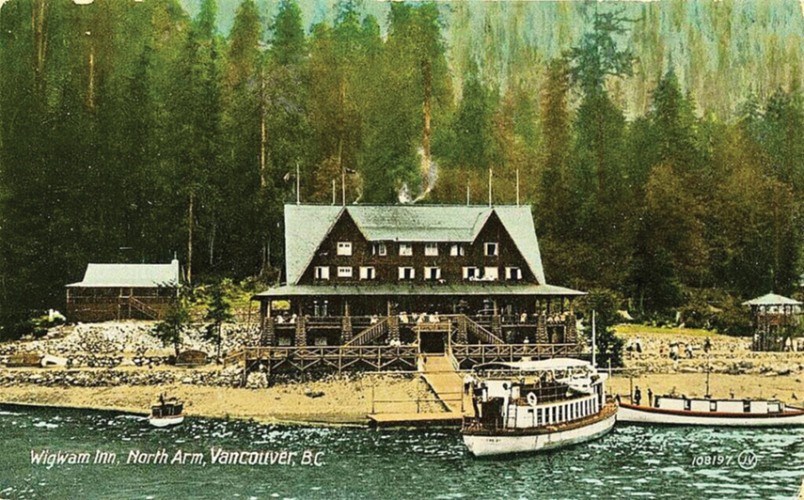 The Wigwam Inn opened at the north end of Indian Arm in 1910 and was rumoured to be frequented by gamblers and mobsters, including Al Capone. Photo supplied North Vancouver Museum and Archives

A film class from West Vancouver is trying to figure out what is fact and what is fiction in the legends surrounding Indian Arm’s Wigwam Inn.

They have scouted the isolated location at the north end of the Arm, started raising money, conducted extensive research and, in January, they will head up in a boat loaded with equipment to make two short films – one a documentary about the century-old building and the other a drama about two lost kayakers set at the eerie location.

The Rockridge Secondary students, under the guidance of their Advanced Film teacher, David Shannon, are in charge of writing, producing, filming and editing both films.

“This is their film, they’re to handle all aspects,” Shannon said. “I get the ball rolling and it’s their ball after this.”

The remote location of the filming will be a positive, but also a challenging, feature. Shannon said it’s good to get his students away from distractions while they’re filming, but, as his students pointed out, it’s going to mean a lot of very detailed planning, because once they’re there, a boat-ride away from civilization and without cellphone coverage, they will really be on their own.

In addition to food and sleeping equipment, they will need to bring along all their filming gear including extra power in case the early-20th-century building can’t support their 21st century equipment.

The class took a day trip to Wigwam Inn in September and the “spooky setting” ended up changing the nature of the film, said Kai Toku-Contreras, who is directing the short dramatization.

“We visited the Wigwam to feel its charm and to see what its potential is in different locations – by visiting it, a lot of ideas came to us, and we actually did a big turn on our original idea,” said the film’s producer, Isabelle Launhardt. Originally, they were going to do something light-hearted, unlike last year when they made a film based on a Stephen King short story.

Launhardt is excited about getting on location to film, but she knows the remote area will be risky at that time of year, especially if the weather doesn’t co-operate.

She pointed out that Wigwam Inn is a 45-minute boat ride away “on a good day,” and they are going to prepare in case things go sideways.

“If it snows and we’re stuck there … and they can’t get to us in four days, we need to prepare just in case – extra food, extra water, flashlights – everything ready,” she said.

The building has a long history and many legends surrounding it, including rumours of Al Capone and a ghost visiting the inn.

Wigwam Inn was built in 1909 by a German, Alvo von Alvensleben, and it is currently owned by the Royal Vancouver Yacht Club.

“Every new owner tried to use it for something else – so at one point it was a Bavarian hunting and fishing lodge, and then it became … a retreat for Vancouverites on the weekend, and then someone got hold of it and tried to turn it into an illegal casino,” Shannon said. “We even found one former owner who was contemplating tearing it down and subdividing it.”

In the 1980s, it was bought by the Royal Vancouver Yacht Club and was opened to its members in 1985.

Shannon has been going up to Wigwam Inn with his parents since he was a child and now that he has children he’s been taking his kids up there as well. No one has ever made a documentary about the building, he said, but there are a lot of stories about it, which may or may not be true.

When Shannon asked members of the yacht club whether they’d be interested in his students creating the first-ever documentary of the building, which is still very close to its original form, he was met with an enthusiastic response. The students are fundraising to pay for the two short films with a goal to raise $5,000. Asking and receiving donations for the projects raises the bar, said Josh Yaron, a Grade 10 student who is directing the documentary.

With more than a hundred years of European history at the northern end of Indian Arm more well-known to the public, the students are curious about the First Nations history in the area and this a subject area the students hope to explore with the Tsleil-Waututh Nation.

Shannon has done some legwork for the students, finding interviewees and helping to set up an Indiegogo account, but from then on it’s up to the students – they will schedule and film the interviews and then take the footage and edit it into a film.

They will also have support from another teacher, Carrie Lehman, who has done acting work in the past.

Yaron is directing the documentary and Jade Weinstein is producing. At this point their research team is digging through historical material and they will formulate questions, but the final story will be woven out of the answers they get, Yaron explained.

For the documentary, Yaron is creating the vision to tell the history of the 100-plus year old building, and Weinstein is making sure their team is focused on researching, writing and organizing so that everything will be in place in January when they go on location to film.

As producer, Weinstein has to make sure everyone stays on task, and part of that is convincing her classmates that they must work like professionals.

“I’m trying to get them more motivated to say this is a story, you’re storytelling – you’re creating a story that you want everyone to learn about, it’s not a research paper,” she said.

Both Yaron and Weinstein see their project as a professional job, and because they’re receiving funding from donors to create the documentary, they want the product to be of a professional calibre.

Making these two films, however they turn out, will provide the students with practical experience.

Shannon holds the Advanced Film class after-hours on Tuesdays although it’s a credit course, but this allows him to draw in the best students from senior grades. This year he took Yaron into the class, even though he was only in Grade 10.

“This is my life – I sleep and breathe film,” Yaron said.

Although he’s a year younger than most students, Shannon was confident Yaron could manage in the course because of all the extra-curricular time he had spent learning about filming.

The first year Shannon held the class, his students made a documentary called Longshot: The Brian Upson Story, and last year, they made a film based on Stephen King’s short story Grey Matter, and their work has been entered into professional competitions.

Shannon used to work in the film and television industry but teaching allows him to keep more family-friendly hours.

Some of his students are on track to go into the industry, but he is honest about its gruelling hours and the “feast and famine” nature of the industry.

“It’s a good industry for the right people – if you love it, it’s the best industry,” he said. “If you love making films, it’s awesome.” He added that he sees a lot of opportunity for his students.

“There are lots of jobs, especially in Vancouver, especially on the North Shore, for students that turn their hobby into a career,” Shannon said.

Owners of vandalized gondola in Squamish, B.C., offer $250,000 reward for information
Sep 25, 2020 3:15 PM
Comments
We welcome your feedback and encourage you to share your thoughts. We ask that you be respectful of others and their points of view, refrain from personal attacks and stay on topic. To learn about our commenting policies and how we moderate, please read our Community Guidelines.