District wildlife officer Meg Toom points out a trail of garbage in a wooded area of the estuary.

Food wrappers, scraps and garbage bags snake through the brush across a slough, punctuated by a broken down garbage tote.

"This just destroys me," she said.

It's a scene Toom wants to avoid at all costs.

A mother bear and her young have been accessing garbage in the downtown area by the estuary, and a little cub is being taught that garbage and compost totes are a great source of food.

On a sunny morning on March 11, it was clear that these bears had become accustomed to seeking out garbage as a food source.

This type of conditioning will only end badly. As bears become more and more reliant on garbage, they'll become de-sensitized to humans and interact more and more with people.

In such cases, this will almost inevitably result in a bear being killed by the Conservation Officer Service.

Numbers have improved over the past year, but deaths continue to happen.

"I believe all those five were in relation to residential access," she said.

In 2019, 10 bears were killed. Out of those, eight were directly related to residential access.

Toom hopes the decrease in numbers is the result of people being more diligent in keeping their trash inaccessible for bears. Furthermore, she noted GFL, the local sanitation service, is also doing a better job in getting totes repaired faster.

Before, replacements were issued the next collection day, which could take up to two weeks. Now, replacements happen within 24 to 48 hours, Toom said.

Furthermore, the District has recently toughened up its wildlife attractant bylaw, levying steeper fines against people who fail to secure their garbage.

But it doesn't stop with new bylaws.

As part of the District's latest efforts to crack down on bears accessing garbage, a new round of trials for proposed new garbage totes has been underway.

The tote that was found destroyed in the estuary that morning was one of three pilot models that were being tested out on Sixth Avenue.

As part of the program, Toom had placed three totes at a home right by the estuary trails, which bears have been known to frequent.

Each of the totes has a different design, and the District is hoping that at least one of them will become a new candidate that will be distributed by the municipality as a bear-resistant container.

Toom said that because of the nature of the trials, she didn't want to publicly identify the makers of each of the three designs.

However, she took time to show The Chief how each of them worked.

Tote A is a double-layered plastic container. That morning, it was clear that the mother bear had punched a hole through the first layer of the lid, only to find a second sheet of plastic underneath.

Toom said it seemed the bear had given up in confusion.

The mother was probably expecting to find a treat when she tore open the first layer, but instead of garbage, she was greeted by another layer of plastic.

To open, this tote requires the user to slide their hand under a plastic apron under the rim and unhitch the lock. In this way, its locking mechanism more closely resembles the big brown anti-bear garbage cans seen around town.

A handle at the top of the lid allows the user to pull upwards and open the container once it's unhitched.

This tote had successfully kept a bear away from the garbage.

Another interesting feature was that this tote, like all totes being piloted at the moment, automatically unlocks when turned upside down by the mechanical arm of a garbage truck. This means residents don't have to unlock their garbage totes before setting them out on the street on garbage day, which is the current practice.

As a result, garbage stays locked until the garbage truck arrives.

Tote B has a different approach.

At the top of the lid is a small cylinder with a hole big enough to fit one or two fingers.

Toom opened up the container by reaching in and unhitching the lock. A strip of metal reinforced the rim of the container.

"This provides a little bit more stability," she said. "They can't get their claws in to pull this lid up and out."

It's important to make sure the lock is engaged by closing the lid forcefully and tugging upwards to make sure it's catching, she said.

Tote C's lock is located under the rim.

In this case, it requires the user to use a pinching motion to unlock the latch. Once this is done, the lid can be opened.

This tote, however, was the least lucky of them all that morning.

One of the Tote C pilot bins found itself destroyed by the mother bear and her cub that morning.

Toom explained bears rarely eat the garbage out in the open.

She said, judging from the trail of waste leading into the estuary, the mother bear had dragged the tote away from the houses into a wooded area where mother and cub felt safe to eat.

Toom said the pilot project is still ongoing and with further testing, the District may be able to find a bin that's most resistant.

However, "resistant" is a keyword here, she noted, because there are no totes that are completely impervious to bears.

Totes with bear locks on them have been in Squamish for a number of years now, and with each passing generation, bears become savvier about how to open the containers.

As a result, municipal authorities and wildlife have been in a perpetual arms race.

"Squamish has had locking totes since 2006, so a lot of the bear population in Squamish has become kind of adept at breaking into totes," said Toom.

"They know these containers contain food, and because they're highly motivated, they will work at them to get in."

Local government has been finding ways to procure new totes to keep up with the bears' ever-evolving ability to find their weaknesses and break into them.

"Obviously as you can see today, even these test totes are really getting a run for money with the local bear population," Toom said. 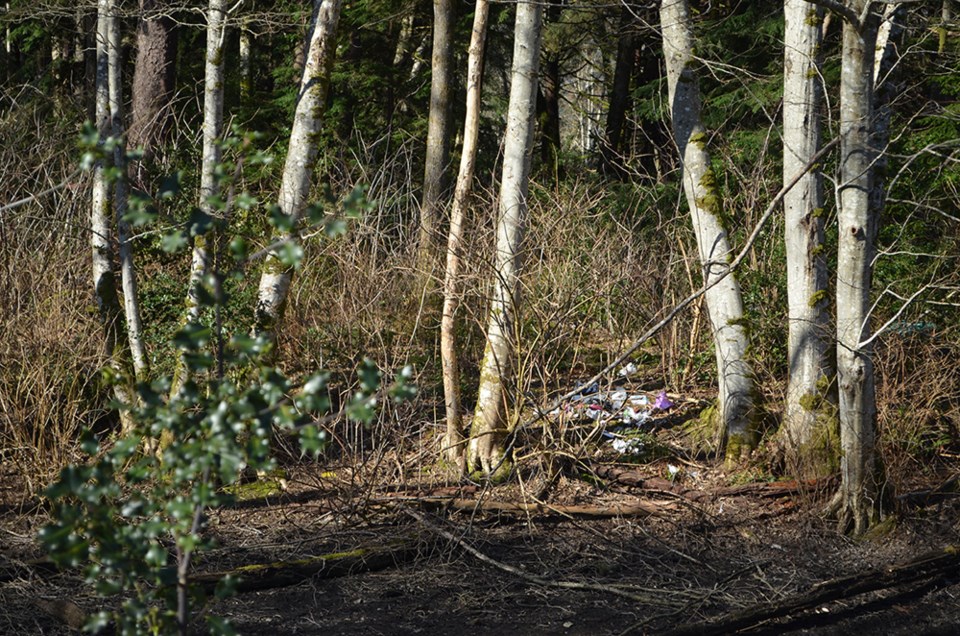 A mother bear and her cub leave a trail of garbage after accessing a tote at a residence near the estuary. By Steven Chua