Dennis Joseph, Xwechtaal, has been working to transform his basement into a personal recording studio during the pandemic. 🎤
Feb 14, 2021 10:01 AM By: Elisia Seeber 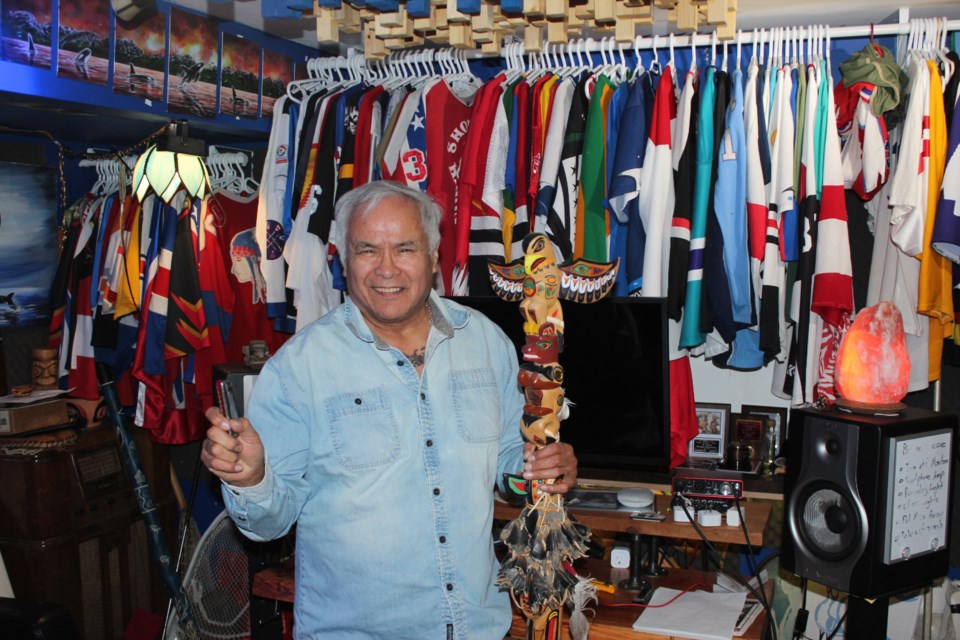 Squamish Nation Elder Dennis Joseph holds his harmonica and talking stick in his basement studio. He says creating music and poetry has helped him through the pandemic. Jordon Bauer

So, when the coronavirus pandemic struck and lockdown ensued, the 63-year-old decided to focus his energy on something positive and embarked on a passion project.

He began renovating his basement into a personal recording studio, so he could have more opportunity to share traditional Squamish stories through “music and spoken word” with others to help uplift their spirits.

Joseph started renovating the room about 10 years ago, initially using it as a rehearsal space and somewhere to display his vast sports memorabilia. His colourful studio showcases his other great love – lacrosse. He has more than one hundred jerseys on show, from over 50 years of being on the field.

Now, thanks to a grant from the First Peoples Cultural Council, Joseph has been working on updating the basement with recording equipment which he hopes to one day, post-COVID-19, invite other musicians in the community to use.

“The recent highlight is that I got a recording equipment grant, so that includes new monitors, new microphones, and a new interface,” said Jospeh, adding that he was also training to become a recording engineer.

“I’m very fortunate to have gotten picked. My hope is to bring in various artists of all backgrounds to do recording.”

Musical passion passed down through generations

His love for creating music stems from his parents and grandparents.

“I was raised with music,” said Joseph.

“I was fortunate through my mother; she inherited all the brass instruments you can think of from her father who was an orchestra leader. Being the oldest, she inherited everything he had, a tuba, trombone, trumpet, saxophone, French horn, you name it.

“My mother was a singer in a choir and my dad played in an orchestra, and he was also a singer, both traditional and jazz and blues. His passion was trumpet, so he taught me the basics on pretty much every brass instrument there is.”

Joseph’s instrument of choice turned out to be the harmonica – greatly influenced by the smooth tunes of Paul Butterfield, an American blues harmonica player, singer, and band leader.

He enjoys playing the instrument, but he also collaborates with other musicians to make music, sings back-up vocals and traditional Indigenous chants.

He’s already recorded a couple of soundscapes, which were released on Spotify last year, including a song he wrote called "The Arrival," with music by Brent Joseph.

“This soundscape tells the story about the first tall ships coming through what now is First Narrows,” said Joseph.

“It’s also about change that was prophesied and told through the generations until the arrival.”

Another song he worked on is called "The Sisters."

“You probably know The Lions mountains, we call them The Sisters,” said Joseph. “They're actually twin sisters that were transformed into mountains. The essence of the story is for all of us as human beings to get along. The creator transformed those sisters as a reminder to us to always work toward peace.

“I updated that story through spoken word and song with my cousin and other musicians to tell of the great battles back and forth and the ultimate peace accord and transformational story.”

As the pandemic continues, he hopes to keep creating music himself, and with close family members, as well as set up a live performance series from the studio via social media.

A dream to open 'Bubba's Studio'

While opening his recording studio to other musicians is still a little while into the future, Joseph has big dreams and already has a name picked out.

“I’m calling it Bubba’s Studio,” he said.  “That's my nickname from sports a long time ago and it has stuck to me ever since. When I was playing football, I was named after a linebacker – Bubba Smith – who was quite noted in his time in the '70s, and when I was a boy, I played just as fierce.

“I carried it through my football career and my lacrosse career. I played lacrosse for 54 years.”

Joseph was playing lacrosse in grand masters up until May 2017, when he suffered a stroke. It was then that he turned to an old teaching to help guide him through.

“An old teaching that I learned in the longhouse from the Elders is that if you ever experience deep trauma is to sing,” he said.

“When I had the stroke, I began to sing a traditional song. I sang, probably for two and a half hours. I wasn't singing out loud, I was singing in my heart and mind. Just singing along and of course being in the moment with my partner and family that were concerned.”

Formerly on Squamish Nation Council for 28 years and the community’s traditional coroner, Joseph said he’d also picked up a thing or two on how to deal with emotional or distressing situations.

“One thing I learned in that experience is to have a good wellness plan, which has led me through this challenging time,” he said.

“Having good tools to support you to get through those hard times and people to talk to, that’s the primary one. I have a very supportive family. So, I’ve always appreciated that.”

Throughout the pandemic, Joseph has been using his studio to tune in to his creative side and find new ways to reach out to the community and his extended family during times of need, as well as offering wisdom and insight via video calls to varying organizations.

“I'm doing a lot of poetry and lyric writing,” he said, adding that when he couldn’t attend his mother-in-law’s funeral, due to Provincial Health Officer rules recently, he wrote a poem for the family.

Joseph also recently spoke at a UBC Learning Circle webinar where he offered guidance and teachings in relation to the COVID-19 pandemic. He began the webinar with a healing song called Ah Ni Nah to enlighten and uplift listeners.

“Ah Ni Nah is a Squamish word that I grew up hearing, one of 11 children, and when I heard that word from my mum, it was often always when one of us fell or tripped over,” explained Joseph.

“When I got older, I asked my mother, ‘what does that word mean?’ And she shared with me that, ‘we all fall and it's up to you to get up, but, every once in a while, you need some help.’

“It's a word that we share to keep your spirit, your soul, if you will, together.”

He said the pandemic had been a challenging time for the Squamish community, which is accustomed to gathering for many traditional events.

“We’ve had our share of loss and many indigenous communities are as well,” he said. “The challenges for Squamish and Coast Salish, is not being able to get together in our longhouses, as we still practice our ancient ways of Spirit Dancing, through song and dance.”

He said the community was also missing being able to be there physically for one another when a loved one passes.

“It's important work in our community and anybody I've talked to is deeply missing it,” said Joseph.

“We're all looking forward to being able to gather in that way again.”

As strict pandemic restrictions continue, Joseph’s advice to those struggling with isolation is to “take the time to be creative” – whether it’s music, art, reading or learning something new.

In difficult times Joseph wanted to remind community members to be kind to themselves and to be patient.

For now, he’ll continue to create music to soothe his pandemic blues.

Elisia Seeber is the North Shore News’ Indigenous and civic affairs reporter. This reporting beat is made possible by the Local Journalism Initiative.