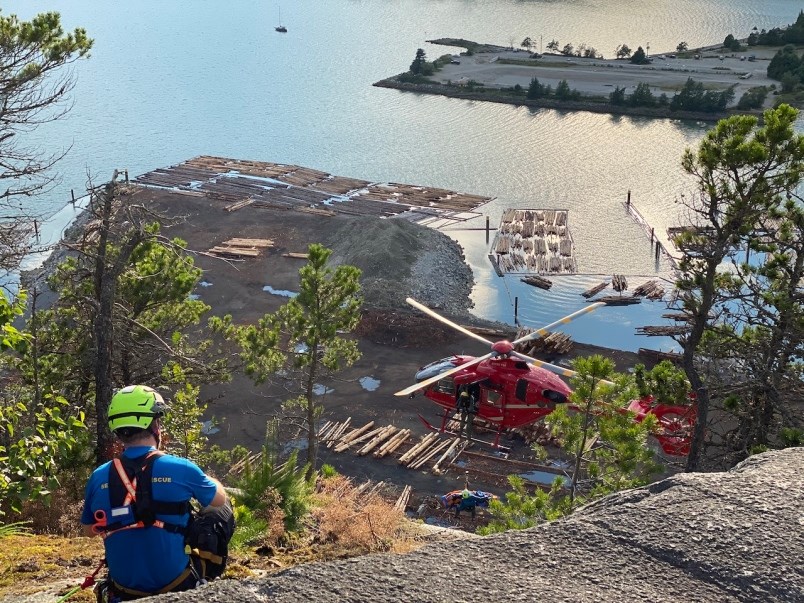 The provincial government is going to pony up $6 million per year in funding for B.C. ground search and rescue organizations, including Squamish Search and Rescue.

The announcement, made Tuesday, July 21, means that long-awaited, stable annual funding contributions will begin in 2022-23.

The latest call (as of July 24) came the day after the announcement when Squamish SAR assisted BC Ambulance and Squamish Fire Rescue responding to an injured 12-year-old mountain biker on the Leave of Absence trail. The child was not seriously injured.

"Our team was able to respond with our e-bikes and Squamish Fire Rescue and BC Ambulance were able to drive around to the bottom of the trail and hike up to the patient where she was assessed, treated and transported back to the waiting ambulance," Squamish rescue manager B.J. Chute said.

Since January 2020, B.C. ground search-and-rescue volunteers have responded to more than 700 calls throughout the province, according to a provincial government news release.

"What is exciting about this new announcement is that it is continued, so we are giving some certainty and some sustainable funding, which we have been asking for, for some time, so it is really exciting news," said Chute, though he also acknowledged the organization will still need to rely on other funding and support from the District of Squamish, corporate and private donations and task reimbursements.

Individual rescue operations like Squamish's don't yet know how much they will get through the newly announced funding, but being a busy and technically advanced unit, Chute imagines the dollar amount will be similar to other years' funding of about $100,000 per year.

"But what is really good for us is that for about the past three years, with the last government announcement — $300,000 over three years — we were able to do a three-year funding plan, so that was very helpful for us... This being sustainable now we can count on thereabouts the same money, which is really going to benefit Squamish and the way we are going to be able to plan for capital assets," Chute said.

Since 2013, BCSARA has been working with the provincial government and advocating for a long-term funding model.

“This announcement of sustainable funding and support for the 79 groups and their 2,500 unpaid professional members is truly a milestone for the ground search and rescue service in B.C.,” said Chris Kelly, president, on behalf of the BCSARA board in the provincial release.

Minister of Public Safety and Solicitor General Mike Farnworth recognized this work in his announcement of the stable funding and asked that recreationalists do their part to support search and rescue crews.

“B.C.’s ground search and rescue groups have been calling for long-term, sustainable funding, and we’ve worked with them to meet this need,” Farnworth said in the release. “But funding is only one way to show our support. Search and rescue volunteers take a risk every time they go out to rescue someone, and that risk is heightened due to COVID-19. I’m calling on all British Columbians to be safe and to make sure your family, friends, and neighbours are being safe, so we can reduce the risks for everyone.”

"SAR shouldn't be your only rescue plan," he said.

"People do need to, by all means, go out and enjoy themselves, but they do need to be prepared for whatever activity they are venturing out for and that includes being physically fit for the activity, being prepared, researching their trails and having the equipment appropriate for that activity, as well as a little extra gear and food and water. And expect that any sort of response, whether it is from SAR or fire or ambulance can be quite a lengthy process, depending on where they are."

What about marine search and rescue?

"We are extremely pleased, and happy for them, it is a good news story," said Royal Canadian Marine Search and Rescue's (RCMSAR) director of readiness Ralph Mohrmann about the funding for ground search and rescue teams in the province.

However, the provincial government has a Memorandum of Understanding with RCMSAR to reimburse operational costs related to assistance to the province, a local government or First Nation, according to Emergency Management BC.

Royal Canadian Marine Search and Rescue is tasked with about 30% of Coast Guard calls, for a total of approximately 800 tasks over the last decade, according to Mohrmann.

Each station or unit of marine rescuers, such as Squamish Station 4, also fundraises to support itself.

"There's never enough money to go around, so fundraising allows stations to do more with less," Mohrmann said.

Scott Shaw-MacLaren, with Station 4 Squamish said that the team just got their vessel back from a refit.

Squamish marine rescue's current location at the yacht club is a long-term, but temporary situation and the organization would like to find a permanent home to set up.

"Hopefully we will find a permanent home eventually," he said.

With COVID-19, methods of fundraising are restricted.

The team applies for lottery grants and relies on corporate, private and online donations.

This story originally appeared in The Squamish Chief on July 25. With a file from Brent Richter/North Shore News. Pique will be following up with Whistler Search and Rescue for a related story this week.

578 active COVID-19 cases in B.C. is most since May 8
Aug 14, 2020 9:22 AM
B.C. Health Minister issues warning for those planning on holding weekend events
Aug 13, 2020 6:39 PM
Man guilty of murdering his partner at hotel in Kelowna, B.C.
Aug 13, 2020 2:43 PM
Comments
We welcome your feedback and encourage you to share your thoughts. We ask that you be respectful of others and their points of view, refrain from personal attacks and stay on topic. To learn about our commenting policies and how we moderate, please read our Community Guidelines.