He also said regional essential travel recommendations, which now apply to B.C.'s Lower Mainland, would be extended for 'the next two weeks at least.'
Nov 18, 2020 4:22 PM By: Stefan Labbé 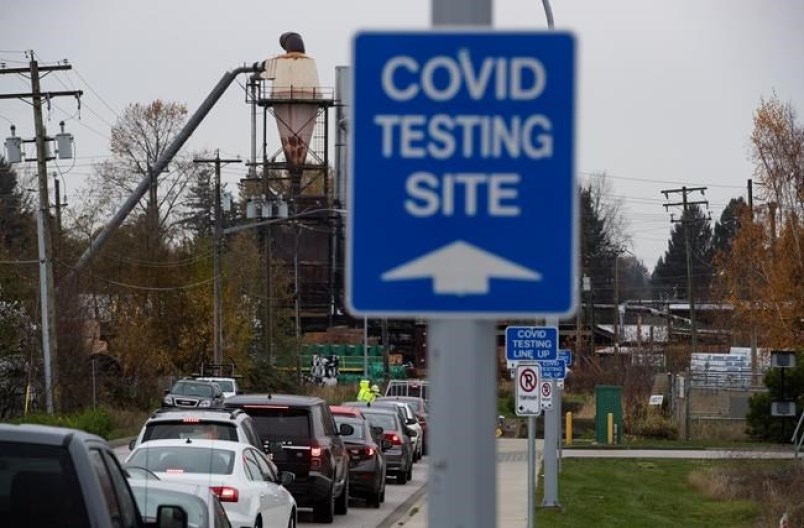 Premier John Horgan has called on leaders from across Canada to develop a “pan-Canadian” approach to inter-provincial travel at a time when COVID-19 cases are surging across many provinces.

Such a plan, he said, would ensure those travelling to British Columbia from other provinces and territories would only do so for “business or their well-being,” and that beyond that, Canadians should remain in tight social circles.

“We need a pan-Canadian approach to travel. We need to make sure that people in Coquitlam are living under the same rules as people in Chicoutimi,” he told reporters Wednesday morning.

Horgan said he will be speaking to Prime Minister Justin Trudeau later this week and will bring up an approach in which all of Canada’s federal and provincial jurisdictions tell residents to “Stay where you live.”

The call to wind down inter-provincial travel comes as caseloads of COVID-19 surge across several Canadian jurisdictions. Across Canada, the seven day rolling average of new daily cases is approaching 5,000 per day, with upticks in daily caseloads in Ontario, Quebec, Alberta and Manitoba. Even Nunavut has instituted a two-week lockdown after at least 26 cases were confirmed positive yesterday.

In British Columbia, the province’s daily tally broke another record Tuesday after health officials announced 717 new cases over a 24-hour period. Most of those cases are concentrated in the Metro Vancouver areas of Fraser and Vancouver Coastal Health, and both regions have been under enhanced restrictions limiting residents’ social contact to direct members of their household. Among other measures, health officials have strongly suggested limiting travel in and out of the region to essential only.

On Wednesday, Horgan expanded on that, saying that the regional essential travel recommendations would be extended for “the next two weeks at least.”

“Non-essential travel should not be happening in British Columbia,” he said, later clarifying that his government did not have any plans to institute province-wide, or even inter-provincial restrictions.

“I’m not suggesting we put in restrictions beyond the obvious: if you don’t need to travel, don’t travel.”

Questions have also been raised on whether health officials would put into place regional restrictions limiting travel to Vancouver Island, a region that has seen relatively few cases of COVID-19.

Horgan said he would leave the decision up to the Island Health authority’s medical health officer and provincial health officer Dr. Bonnie Henry, but that it “may not be the best way to proceed.”

Horgan did, however, say he would press his federal counterparts on re-instituting a federal exemption allowing passengers on B.C. ferries to remain in their vehicles in enclosed car decks during travel. The federal Ministry of Transportation removed the exemption in the summer.

“Transport Canada was premature in taking away the exemption that was sought and granted in the middle of the pandemic. We are not out of the woods yet,” said Horgan.

For unlike the Maritimes, which created an “Atlantic Bubble” in the summer, Horgan said B.C.’s options were limited by geography, pointing to the province’s long borders with the Yukon, Alaska, Washington and Alberta — the later three experiencing recent surges in COVID-19 cases.

While borders with the U.S. remain closed, many still work and live on opposite sides of the B.C.-Alberta border, a reality Horgan said requires all authorities to speak “with one voice” and “using quarantine measures, possibly.”

“We need to bear down for the next couple of weeks,” he said.

This article was originally published by the Tri-City News.