BC Ferries is resuming service on the Horseshoe Bay-Nanaimo route June 3, but a schedule change on the Langdale run to accommodate the Nanaimo service isn’t sitting well with some Sunshine Coast residents or the directors at the Sunshine Coast Region
May 30, 2020 3:08 AM By: Sean Eckford / Coast Reporter 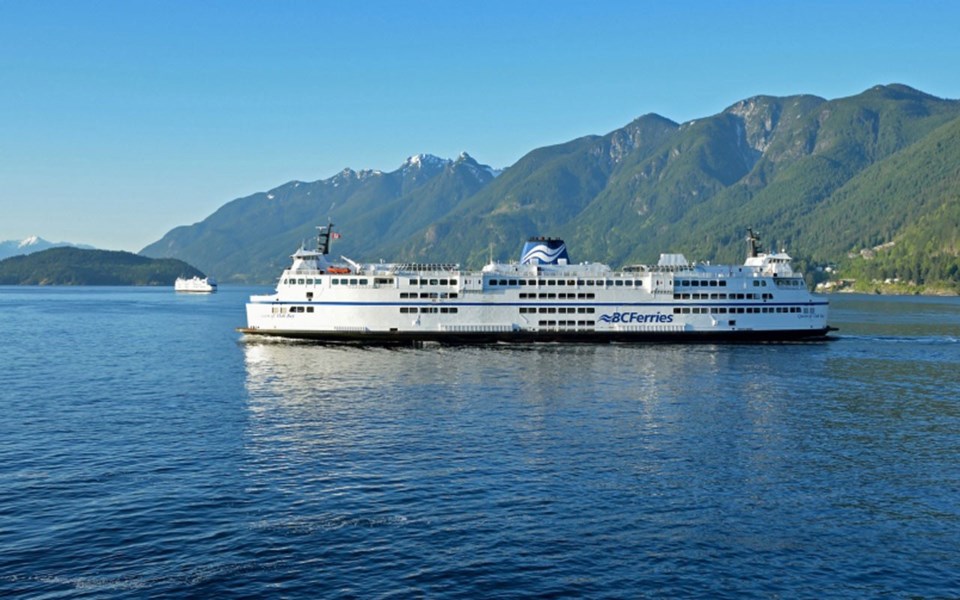 Ferries on the Langdale and Nanaimo runs pass each other near Horseshoe Bay. (BC Ferries)

BC Ferries is resuming service on the Horseshoe Bay-Nanaimo route June 3, but a schedule change on the Langdale run to accommodate the Nanaimo service isn’t sitting well with some Sunshine Coast residents or the directors at the Sunshine Coast Regional District (SCRD).

Sechelt’s other director, Alton Toth, said, “This is nothing short of horrendous and I’ve got no problem going on record saying that. As a business owner this schedule means I won’t be able to go to Vancouver to get supplies for my business. That’s going to increase my costs and that’s going to have an impact on my business."

David Croal, the director for Gibsons, pointed out that a lot of commuters have been using the last evening sailing to return to the Coast.

“They will be totally boned by this manoeuvre on BC Ferries’ part,” he said. “It’s been a huge wrench thrown into the machine, and a lot of people are very upset."

SCRD chair Lori Pratt, who also sits on the Ferry Advisory Committee, said the FAC was “horrified” when they got notification of the schedule change.

The board voted to send a message to BC Ferries urging them to reconsider the schedule change and “reinstate a later sailing on the Langdale route.”

Siegers and Pratt are also hoping to meet with Collins to discuss the July and August schedule.

Deborah Marshall, BC Ferries’ executive director of public affairs, told Coast Reporter, “We have had some feedback from customers regarding the new schedule and appreciate the concern being raised about the timing of the last ferry sailing being earlier than usual.”

Marshall said the company has had to make hard decisions to cut costs “in order to protect the long-term sustainability of the ferry system.”

The system-wide cuts to BC Ferries’ service were made possible by a temporary agreement with the province that came into effect April 4 and allows for a minimum of six round trips per day on the Horseshoe Bay-Langdale route and 12 “daily minimum hours of operation.”

The adjusted Langdale schedule is in line with those minimums, but Powell River-Sunshine Coast MLA Nicholas Simons said he thinks it’s time to start adding sailings again or at least keep the final sailings later in the evening and he’s raised the issue with Transportation Minister Claire Trevena.

Simons said with the ships still restricted to 50 per cent of their usual passenger capacity by Transport Canada, the limited capacity and number of sailings “is forcing Sunshine Coast residents to make reservations and pay more.”

He said this is a time when the focus should also be on “helping businesses thrive.”

The temporary service level adjustment agreement between BC Ferries and the province is set to expire June 4, with “month to month” extensions allowed “by mutual consent.”<

The Transport Canada directive on passenger capacity is in force until June 30, but could also be extended.

Marshall said BC Ferries “continues to work with the province on service level adjustments in the interest of ferry users as we move into a new normal.”

In a statement to Coast Reporter, officials from the Ministry of Transportation and Infrastructure said BC Ferries and the province “are in the process of getting ferry service to levels that the public needs.”

The ministry also said a renewed temporary service level agreement is being negotiated.

– With files from Sophie Woodrooffe

Man charged with second-degree murder in double homicide in east Vancouver
Jul 9, 2020 10:43 AM

Woman who talked to unconscious husband for 30 years gets solace from B.C. study
Jul 9, 2020 1:00 AM
Comments
We welcome your feedback and encourage you to share your thoughts. We ask that you be respectful of others and their points of view, refrain from personal attacks and stay on topic. To learn about our commenting policies and how we moderate, please read our Community Guidelines.