Talking to teens about cannabis crucial, parents told at forum 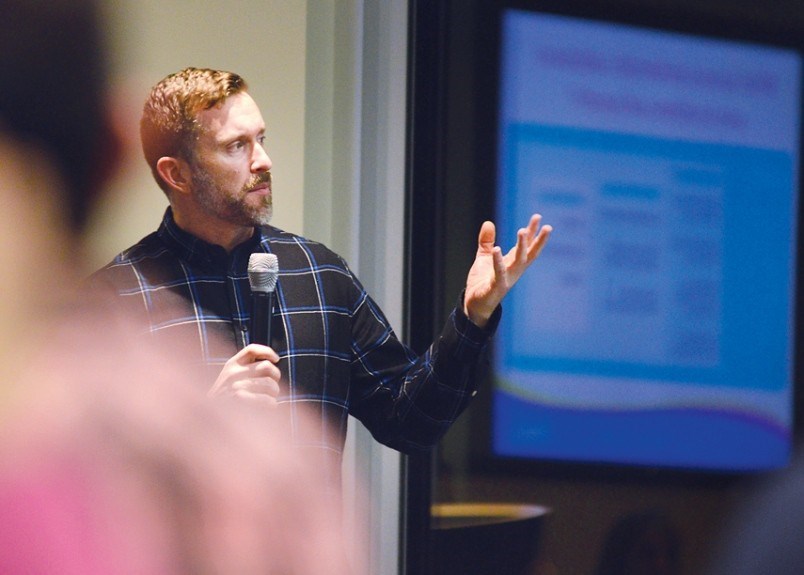 There's not much point worrying that legalizing cannabis will "normalize" marijuana use, because it's already normal, said Dr. Mark Lysyshyn, medical health officer for the Sea to Sky.

"When 40 per cent of people admit to using it, we need to be more realistic about it," he said.

The key for parents and youth is to focus on reducing potential harm and keeping communication open.

Those were among the messages Wednesday evening at a forum on cannabis legalization and youth hosted by the North Vancouver School District and Vancouver Coastal Health in North Vancouver where about 50 people came out to hear Lysyshyn speak.

Though marijuana is still not legal for those under 19, legalization is a monumental shift, said Lysyshyn.

Lysyshyn said he doesn't favour fear or abstinence-based anti-drug education like the early DARE programs-because they can make teens who do use drugs reluctant to seek help.

School districts are still evaluating options for cannabis education, but Lysyshyn said he prefers programs that encourage teens to think critically about marijuana use and the reasons people use drugs.

He added the theory marijuana is a "gateway drug" that can lead to harder drugs like cocaine and heroin has been debunked.

Because there's been limited research, there are still a lot of unanswered questions about cannabis, said Lysyshyn-like how much is too much and what kinds of risks and benefits are backed up by scientific study.

Many medical benefits touted by marijuana advocates and producers are still an open question, he said. Because medical use of cannabis was legalized ahead of recreational use, a lot of people who said they are using marijuana for medical purposes, "I don't think are using it in medical ways," said Lysyshyn.

So far, science backs up medical use of marijuana for symptoms of chemotherapy-induced nausea, multiple sclerosis, appetite stimulation, Tourette's syndrome and chronic pain in adults.

But marijuana can also have negative effects on motivation and memory and it can also be addictive for some people, he said.

About nine per cent of cannabis users develop an addiction (compared to about 15 per cent for alcohol use) but that figure jumps to 17 per cent for teens who start using cannabis early. Among daily cannabis users, between a quarter and half of them will become addicted, said Lysyshyn.

In high doses, marijuana can also lead to paranoia and psychosis among those with a predisposition, he said.

Early and heavy use of cannabis in teens has also been shown to lower IQ, he said.

So far studies have not shown that smoking pot causes lung cancer, he said, although that hasn't been definitively ruled out.

And Olympic snowboarder Ross Rebagliati was correct-inhaling second-hand smoke can result in measurable levels of THC. That's why it's important that cannabis use comply with existing smoking bylaws and why marijuana smoking is illegal in vehicles, said Lysyshyn.

Lysyshyn said to minimize potential harm, it's important to stay away from high-strength products like concentrated forms of cannabis known as "wax" and "shatter" and synthetic cannabinoids-which are sometimes added to unregulated products to boost THC levels. Those are all easier to overdose on, he said.

Health authorities have similar concerns about edible cannabis products, he said, which are not yet legal in Canada but widely available in marijuana shops in the Lower Mainland. "We are concerned about the possibility that they'll be fed to children or children will eat them," he said. In U.S. states that have legalized cannabis, there have been cases of accidental child and pet poisoning with cannabis edibles, he said.

Driving while impaired by marijuana is also a concern, he said-although people impaired by alcohol tend to drive more dangerously.

Karmella Benedicto De Barros, a youth worker who has worked with teens on the North Shore, said, "I don't think legalization has a huge impact on whether or not young people are going to be smoking weed."

Benedicto De Barros described her early experimentation with marijuana and cannabis addiction as a teen. But she said alcohol abuse is still much more common.

"It's important to ask why they're smoking weed in the first place," she said.

Questions from parents included how to answer kids' questions about a parent's own marijuana use and how marijuana use can impact developing brains.

Lysyshyn said there is evidence that addiction can become more entrenched and harder to change if it sets in early, because young brains are more malleable-but he added that is not unique to marijuana.

Federal government announces wildlife conservation fund for southeastern B.C.
Aug 4, 2020 12:26 PM
Comments
We welcome your feedback and encourage you to share your thoughts. We ask that you be respectful of others and their points of view, refrain from personal attacks and stay on topic. To learn about our commenting policies and how we moderate, please read our Community Guidelines.