That ‘hole’ in the sky wasn’t aliens invading 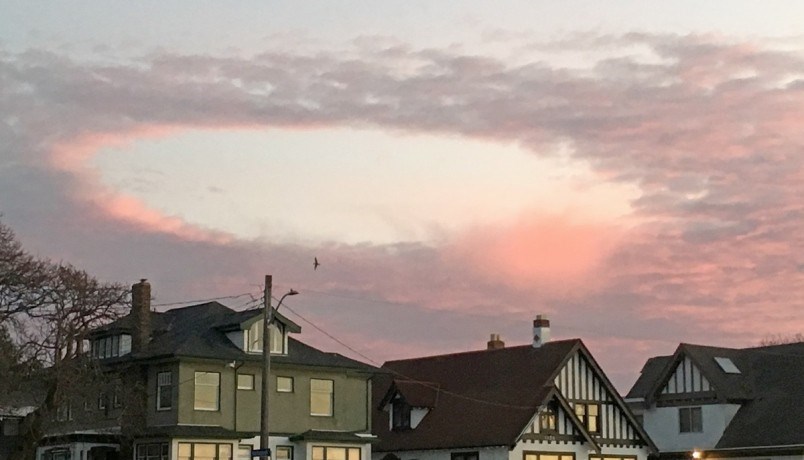 A unique cloud formation during sunrise Monday appeared like a hole in the sky.

Ed Wiebe, a scientific assistant at the University of Victoria's School of Earth and Ocean Sciences, was on his way to work when he saw it.

"I spotted it and I have such an interest in clouds I had to take a picture of it and write about it," said Wiebe. He posted a series of observations on his Twitter account (@edwiebe).

Wiebe said the phenomenon of a large hole appearing in a stratocumulus cloud is colloquially known as a "fall streak hole" or "hole punch cloud" and quashed suggestions it was caused by visitors from another planet: "Not this time," joked Wiebe.

The hole is formed when water droplets in the cloud layer fall below freezing into a supercooled state-the water gets colder and colder but can't crystallize. Then, triggered by some disturbance near the centre of the hole, the supercooled water quickly converts into ice.

The ice crystals grow rapidly, drying the air and falling out of the cloud. The falling ice crystals then evaporate in the even drier air in layers below, he said.

"You're left with this clear dry air in the middle of a cloud," said Wiebe. "It looks really cool."

It's a phenomenon that happens fairly quickly over about 30 minutes to a maximum of an hour and doesn't happen often in Greater Victoria, said Wiebe.

B.C. announces 12 new cases of COVID-19, no additional deaths
Jul 7, 2020 7:02 PM
Government upgrades virtual identification options to obtain BC Services Card
Jul 7, 2020 3:37 PM
Grizzly bear cubs from Alberta find new home at the Greater Vancouver Zoo
Jul 7, 2020 3:18 PM
Comments
We welcome your feedback and encourage you to share your thoughts. We ask that you be respectful of others and their points of view, refrain from personal attacks and stay on topic. To learn about our commenting policies and how we moderate, please read our Community Guidelines.