Vancouver is getting its very own Bunny Café, and its owners predict it’s going to be rather hop-ular when it opens in spring next year
Dec 28, 2019 2:30 AM By: Elisia Seeber / Vancouver is Awesome 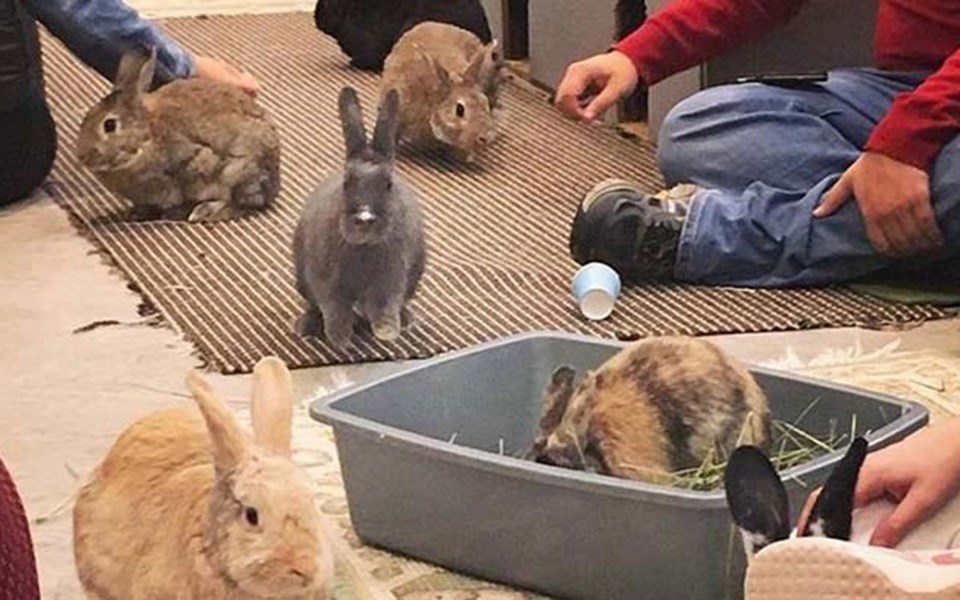 Vancouver is getting its very own Bunny Café, and its owners predict it’s going to be rather hop-ular when it opens in spring next year. Photo: Bunny Cafe Vancouver

Vancouver is getting its very own Bunny Café, and its owners predict it will be rather hop-ular when it opens in spring next year.

The creators of the city’s much-loved cat café—Catfe—have teamed up with Rabbitats Rescue Society to bring Vancouverites a new, and incredibly cute, coffee spot on Commercial Drive in East Vancouver.

Instead of having a meet and greet with adorable cats and kittens in need of adoption, visitors can look forward to enjoying a "meet and treat" with fluffy bunnies looking for fur-ever families.

Rabbitats is a B.C.-based charity that works to save the lives of homeless, abandoned and feral pet rabbits. The charity creates and promotes predator-proof, sustainable and visually appealing rabbit sanctuaries and helps to control feral rabbit populations.

Rabbitats founder Sorelle Saidman, who started the charity back in 2012, said she was hoping the new café would boost rabbit adoptions and help address the province’s overpopulation issues. She said currently adoptions were slow and the charity was caring for about 350 rabbits.

“It’s definitely going to be the best thing for rescue,” Saidman told Vanocouver Is Awesome.

“The bunnies certainly need the assistance. There are way too many bunnies and way too few homes.”

Much like Catfe, the café area will be separate from the bunny lounge but designs are still in the works. Up to 20 bunnies will be hoping about in the sanctuary, but they’ll have access to enclosures to hop into if they need a little private time.

“It’s been so successful as an adoption model because people really get to get a feel for the animal’s personality and get to spend more time with them,” she explained.

Furbacher said the idea for a bunny café came about after she visited a Rabbitats event at UBC and discovered how social and friendly the little critters could be.

“I’d never really spent time with bunnies before that and it was just kind of a magical experience for me,” Furbacher said. “As soon as I walked in the room I was so delighted to be surrounded by all these bunnies. I had expected them to be quite nervous, but when I went into the room they were all just hopping around and being quite social.

“Catfe has worked so well for getting cats adopted, I just thought, ‘what if we try and do the same thing for bunnies.’”

Furbacher held a pop up event in conjunction with Rabbitats in December last year and said the response was “overwhelming.”

“I didn’t know there were so many bunny lovers in Vancouver,” she said.

The duo isn’t worried about attracting visitors to the café.

“Michelle has done a great job with Catfe. Personally, of course, I think bunnies are even more of an attraction than cats,” Saidman laughed.

“It was an amazing response in December so we’re really hoping that will follow through year round. There’s nothing cuter than being swarmed by a heard of little rabbits.”

Saidman said people will be able to feed the bunnies but they weren’t supposed to pet the rabbits because they were trying to replace the concept of petting zoos with a more humane interactive process where the animal has the choice of participating.

“The biggest joy is just watching people relate to bunnies because they don’t always realize that rabbits can be that interactive, friendly and sweet,” Saidman said.

“It gives people a whole new outlook on rabbits, that’s going to be the main takeaway from the Bunny Café."

It’s hoped the Bunny Café will be in full swing by Easter 2020.