Local resident counts 200 people climbing ladder with bare hands on the Chief
Mar 22, 2020 2:45 AM By: The Chief staff / Squamish Chief 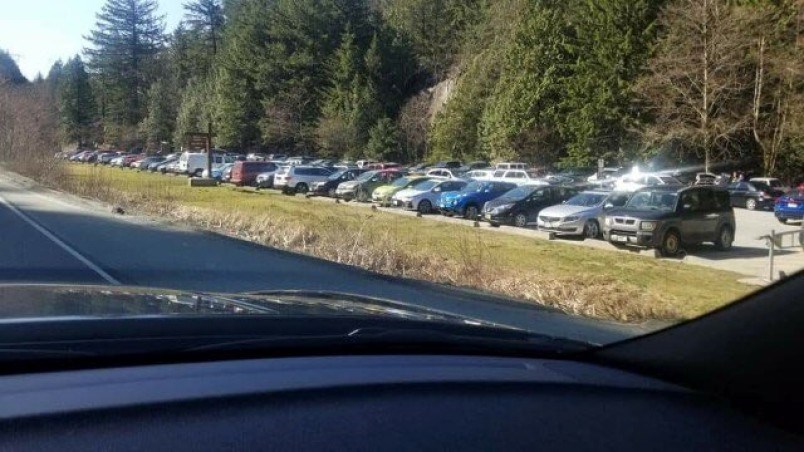 Squamish's Leigh McClurg says he counted about 200 people climbing a metal ladder with bare hands, on the trail up the Stawamus Chief in the couple of hours he was there on Saturday.

According to a recent study published in the New England Journal of Medicine, the virus that causes COVID-19 can linger for several hours to days on surfaces.

On the Chief's peaks, several groups were also gathered.

At a time when citizens are collectively supposed to be social distancing, crowded parking lots, trails and forest service roads in the Sea to Sky caused concern to not only McClurg, but also to Squamish RCMP who tweeted photos of full parking lots, calling the scenes "unsettling."

We are seeing some unsettling images in our corridor in regards to the lack of social distancing and measures to #FlattenTheCurve of #Covid_19...we can only watch with extensive concern for our communities health and safety @WhistlerRCMP @RMWhistler @Squamishtown @VCHhealthcare pic.twitter.com/xW4tw4uYFW

On Friday, BC Parks announced that due to COVID-19, most campgrounds and accommodations will be closed until at least April 30.

Services have also been stopped at most provincial parks, and visitors are asked to follow the recommendations of the Centre for Disease Control and practice social distancing.

B.C. has declared a state of emergency over the spread of the virus.

The province has 424 confirmed cases as of March 21. There have been 10 deaths. Six have recovered.

"To most effectively flatten the curve, and break the chain of transmission, we need everyone to take action at the onset stage. That is why we have put public gathering orders and social distancing measures in place now-to protect us in the weeks ahead," said Adrian Dix, Minister of Health, and Dr. Bonnie Henry, B.C.'s provincial health officer in a joint statement sent out Saturday.

"Now is the time to stay home as much as possible, and to keep a safe distance from others when outside. We are reminding British Columbians that their actions today will determine the impact of the virus in coming weeks."