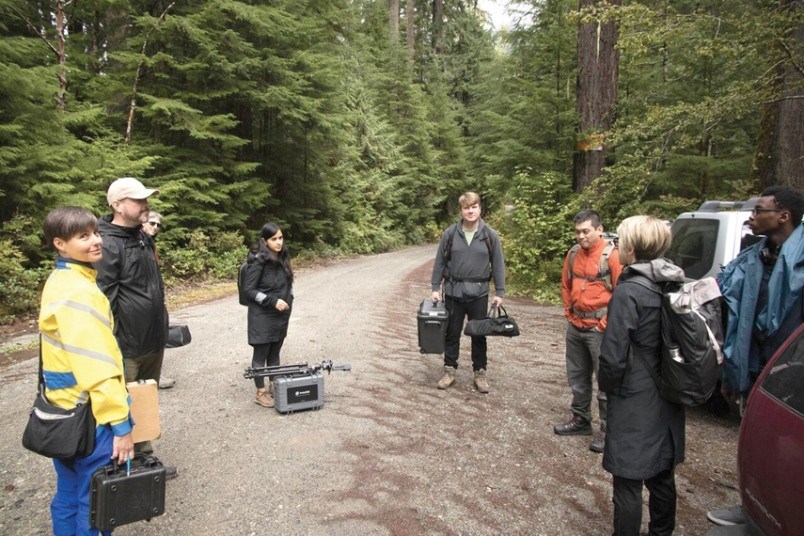 In the shadow of Mount Seymour filmmakers and technicians and researchers ringed around their star: a massive western red cedar.

They rolled sound and stereoscopic video, capturing the striations on each leaf, the strings of bark that have become more rope-like with each passing year and the trunk that - from a certain angle - looks like a pillar holding up the sky.

The aim of the Wild Empathy project, explains Emily Carr University associate professor Julie Andreyev, is to depict: "the life of the tree" through a VR prototype.

"The reason that we're selecting an individual tree is we really want to tell a story about how these old trees are really critical to the biodiversity of the forests," she offers.

With logging and climate change threatening the future of old-growth forests around the world, Wild Empathy is attempting to engender greater empathy for trees through virtual reality.

Andreyev said she was influenced by a Sierra Club B.C. report indicating that B.C.'s forests - formerly a carbon sink - became a carbon source in 2003 due to the pine beetle infestation as well as wildfires and slash burning.

"There's more carbon being released into the atmosphere than the forest can absorb," Andreyev says.

Given that climate, old-growth trees are vital, she notes, explaining their role as "hubs within a network."

"They're sort of knowledge keepers, if you will," she says of the trees. "They initiate communication and distributing nutrients through the soil to other trees."

The other major influence on the project is the Virtual Human Interaction Lab at Stanford University.

Led by Jeremy Bailenson, one of the lab's founding principles is that there is a link between virtual reality and reality. If a gamer is rewarded by aggression within a VR world, they're more likely to be aggressive in the real world.

Given that link, the Stanford lab has pioneered VR environments that attempt to address racism by allowing the user to look into a virtual mirror and see a new reflection and to create empathy for nature.

"We know through recent studies that participants in VR have a very similar if not identical neurological response to the environment that they're experiencing as an illusion," Andreyev says.

That illusion could become an education tool that helps create "environmental awareness" by simply letting VR users "interact with an old tree."

However, creating that illusion requires an abundance of reality.

"In a cubic metre of healthy soil there's hundreds of insects, billions of bacteria, all kinds of life happening: earthworms, other microbial life-forms. Because we work in visual and auditory fields, we can find ways to capture that kind of liveliness rather than synthetically producing it," she explains.

The team, which includes documentary filmmaker Damien Gillis, biologist Dierdre Brink and computer scientist David Baar, may use sensitive microphones to "record the trickle of water movement beneath the bark of the tree and the movement of microorganisms in the soil below," according to a press release.

While they tested a few trees including Douglas firs, the starring tree will likely be a western red cedar on Vancouver Island, Andreyev says, noting the trees are: "iconic" in B.C.

"We're definitely aiming for this as an education tool," she says, adding her hope the program could become part of the curriculum at elementary or secondary schools.

"I'm very interested in creating artwork that involves the opportunities for other living beings to enter into the process and to contribute their creativity," she says.