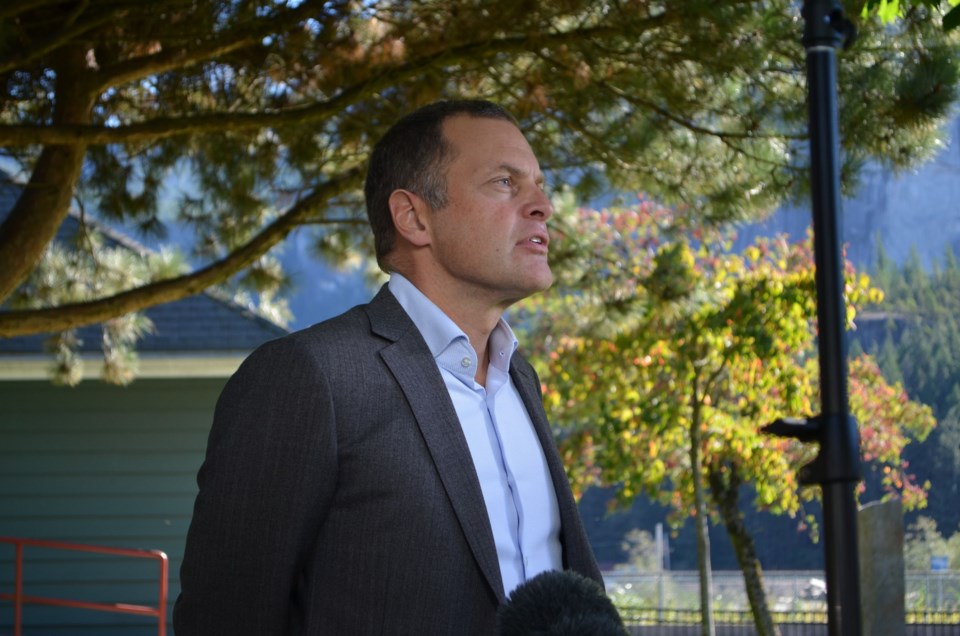 Sea to Sky Green Party candidate (and Whistler resident) Jeremy Valeriote at his campaign launch in Squamish on Sept. 29. Photo by Steven Chua.

The Green Party of B.C. has nominated a Whistler resident and former councillor from Gibsons to be its candidate for the West Vancouver-Sea to Sky riding.

On Sept. 29, at O'Siyam Pavilion in downtown Squamish, party leader Sonia Furstenau announced Jeremy Valeriote—a current board member of the Association of Whistler Area Residents for the Environment—will seek to unseat incumbent BC Liberal MLA Jordan Sturdy in the Oct. 24 vote.

"I am delighted to have Jeremy on our team in West Vancouver-Sea to Sky," said Sonia Furstenau, Leader of the B.C. Greens, in a release. "Jeremy's experience as an engineer and in local government will make him an excellent MLA. We need more thoughtful, solutions-oriented leaders like Jeremy in our Legislature as we implement our economic recovery from COVID-19 and build a stronger, more sustainable province."

During the press conference, Valeriote said that he had followed the issues surrounding liquefied natural gas.

Last provincial election, the Woodfibre LNG project served as a rallying cry for Green supporters, and provided probably the most relevant talking point for the environmentalist party in the corridor.

However, more than three years later, the project is almost entirely greenlit and, realistically, it would be incredibly hard or impossible for the government to strip the project of the many approvals it has obtained.

Taking this into account, Valeriote said: "I believe the biggest opening is the leadership that Sonia [Furstenau] and Adam [Olsen] have shown in being the party that collaborates with others, that wants to hear other ideas."

He did not have much else to say with regard to other issues facing the region, such as regional transit, the opioid crisis and the racial justice demonstrations that occurred a few months ago.

"I'm going to get fully up to speed before I make specific comments on those," said Valeriote.

"I know that regional transit has been a longer discussion without a lot of progress to date. It's very important, obviously, for climate action to have regional transit in the corridor. The other issues you will hear from me in the coming days."

Valeriote is a professional geological and environmental engineer, but, in the public eye, he is probably best known as a former municipal councillor in Gibsons. He sat in office from 2014 to 2018. He did not seek re-election in 2018.

In an article from that year published by The Coast Reporter, Valeriote wrote that he wouldn't be seeking re-election as he would be leaving the Sunshine Coast.

He noted that there were other challenges that faced him while he was sitting on council.

"There are the constantly shifting hours and exceedingly low pay, below minimum wage by most accounting. And then there's the complaining, the mistrust, and the personal attacks. It takes a creeping emotional toll: you try to shake it off, but people say some horrible things to each other, and it sinks down deep and disturbs you. I've had profanities shouted at me outside town hall, and had to sit on my hands on the receiving end of hateful, uninformed and sometimes racist diatribes at public hearings," he wrote in 2018.

On Tuesday he said he was running for the provincial seat for his daughters.

“I am running as a B.C. Green Party candidate for my twin six-year-old daughters,” said Valeriote. “I am prepared to work as hard as I ever have to make sure that both the public health, and the planet’s health, are strong, safe and stable for my daughters to bring up their own kids and grandkids.  Now more than ever, we need to do politics in a kinder, more collaborative and inclusive way.”

In a Sept. 28 press release, the NDP named Keith Murdoch as its candidate for the Sea to Sky (Murdoch was not immediately available for an interview—check back later this week).

Nominations close at 1 p.m. on Oct. 1, after which a full list of candidates will be posted online at elections.bc.ca.

-with files from Braden Dupuis