Why there's a network of tunnels for frogs under B.C. highways

Whistler’s effort to save Western Toads an important part of work to save amphibians
Oct 6, 2018 1:00 PM By: By Elana Shepert/ Vancouver is Awesome 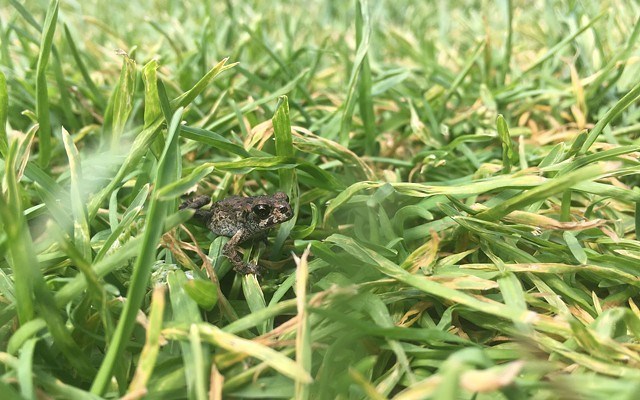 SAVING AMPHIBIANS Whistler's Western Toad toadlets are protect by the local government during their migration each August. photo by Claire Ryan

While it may be the strangest thing you hear about today, there is a network of secret underground tunnels built under B.C. highways for amphibians.

The Government of British Columbia began constructing these safe passageways after it was determined that road traffic was killing a high number of the creatures.

In fact, a number of these cold-blooded vertebrates are considered "at risk" as a result of these incidents.

Darcy C. Henderson, PhD, Senior Species At Risk Biologist, Canadian Wildlife Service, Environment and Climate Change Canada explained that amphibians move during breeding season in search of other wetlands and highways are often in the way. They require water in order to breed, and therefore thousands of them will migrate at once.

Sadly, this often means that many will be killed, as they attempt to cross some of B.C.'s busiest highways.

According to Henderson Okanagan White Lake was a particularly deadly area, with over 1,000 toad and salamander deaths recorded in a single year. What's more, the area's highway only sees about 350 vehicles per day, which means that a high percentage of the creatures were killed.

With that being said, he added that it is one of the most consistently monitored areas. As such, it does not mean that other, less-monitored highways are any less deadly.

Great Basin Spadefoot Toad may sound large, but they are actually only the size of your thumb, and while they aren't as conventionally cute as bunnies or kittens, they posses a unique charm. Sadly, these little toads are at risk in the province and their greatest threat is on highways.

Similarly, the Tiger Salamander is also registered as at risk due to highway crossings.

As it is impossible to tell people not to drive on major highways during amphibian breeding season, the tunnels were built.

But sadly, the tunnels often fail to prevent deaths. Amphibians are hesitant to use them for a number of reasons. Scott D. Jackson from the Department of Natural Resources Conservation University of Massachusetts, Amherst authored an article entitled "Underpass Systems for Amphibians," which laid out some of the issues.

"It is clear to all of us that have worked with these tunnels that light, or the absence of it, is one factor responsible for tunnel hesitation," reads the report. "Once artificial light is provided the time it takes salamanders to enter and pass through the tunnels is dramatically reduced. Based on these observations it appears that future tunnels should be designed to maximize the amount of ambient light inside the tunnels. This could be accomplished by using larger tunnels or providing grates, rather than slotted tops, for the tunnels."

With this in mind, Henderson did indicate the efforts in Whistler to protect the migration of Western Toads were impressive.

In late summer this migration can often appear as a moving carpet, as tens of thousands of dime-sized toadlets make their way from Lost Lake to the woods across the park. The Resort Municipality of Whistler builds ground-level tunnels to guide the toadlets and closes the parks to foot and bike traffic to protect them for several weeks.

While highway deaths are responsible for a large number of amphibian deaths climate change also plays a huge factor in the disappearance of all animals.

In B.C., more than 50 per cent of amphibian and reptile species are of conservation concern from a variety of threats like loss of habitat, roads/traffic, pollution and disease.

Whether you have scientific training or not, help gather scientific data about amphibians in B.C. Share any information you have with the B.C. Frogwatch program.