Wildfire smoke a 'chemical soup' for those who inhale it 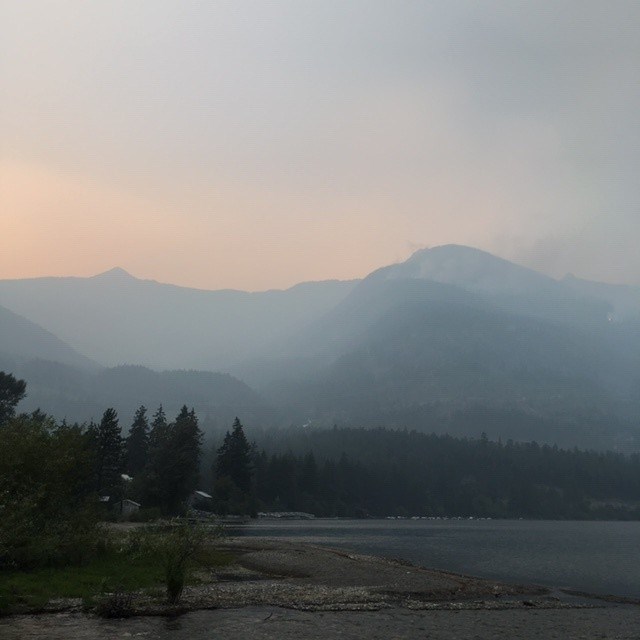 Inhaling smoke from a wildfire can be equal to smoking a couple of packs of cigarettes a day depending on its thickness, said a researcher studying wildfires in Western Canada.

Mike Flannigan, a professor with the Department of Renewable Resources at the University of Alberta, said the smoke is like a "chemical soup" that can be trapped in the lungs and cause a number of health issues.

Depending on the size of the particles, they get trapped in the lungs, accumulate over time and cause "all kinds of problems," Flannigan said.

Sarah Henderson, a senior environmental health scientist at the British Columbia Centre for Disease Control, said the smaller the particles, the worse they are.

Both Flannigan and Henderson will make presentations at the BC Lung Association's annual workshop on air quality and health today, Feb. 6.

Their presentation is timely after extreme wildfire seasons in British Columbia in 2017 and 2018. Smoke from forest fires last year reached Atlantic Canada and even as far away as Ireland.

Emissions vary depending on the differences in fuel, burning conditions and other environmental factors, Flannigan said.

The spread hinges on how high smoke and fire columns rise. Winds can carry the particles north to Europe and Asia, across the world and back again, Flannigan said.

"They can travel long distances for long periods of time."

Henderson said most people living in polluted places face a risk of chronic diseases and slightly shorter life expectancy but that data comes from cities such as New Delhi, one of the most polluted cities in the world.

The air quality in British Columbia is "extremely good" except for a few weeks during wildfire season, she said.

"If we have a season like 2017 and 2018, year after year for the next 20 years, we probably will have a health impact on the population but we don't know what that will be yet," Henderson said.

People should protect themselves from the smoke by spending time indoors, using air filters and not exercising strenuously when outside, she said.

The intensity of wildfires, as shown through remote sensing, is also increasing, Flannigan said, noting that as fuels get drier it is easier for fires to start and spread.

And the wildfire season is also starting much sooner, he said.

In Alberta the wildfire season used to begin April 1 but it's now starting March 1 and is lasting longer.

"In Canada our area burned has doubled since the 1970s. And my colleagues and I attribute this to-I can't be any clearer-human-caused climate change," he said. "Our climate is changing and this has affected fire activity in Canada, western United States and other parts of the world."

The last two years saw over four per cent of forested area burn in B.C. and the province is nowhere close to exhausting how much can burn, Flannigan said.

Historically, he said, it would have been unlikely that the province would have seen a third bad fire season.

"But its entirely possible," he said.

Climate change is making the jet stream weaker, which is causing hot, dry summer days, which are conducive to fire activity, he said.

"On an average we're going to see a lot more fire, and they're going to be longer fire seasons, more intense, and the primary reason why climate change influences fire activity is that the warmer it gets the more fire we see."