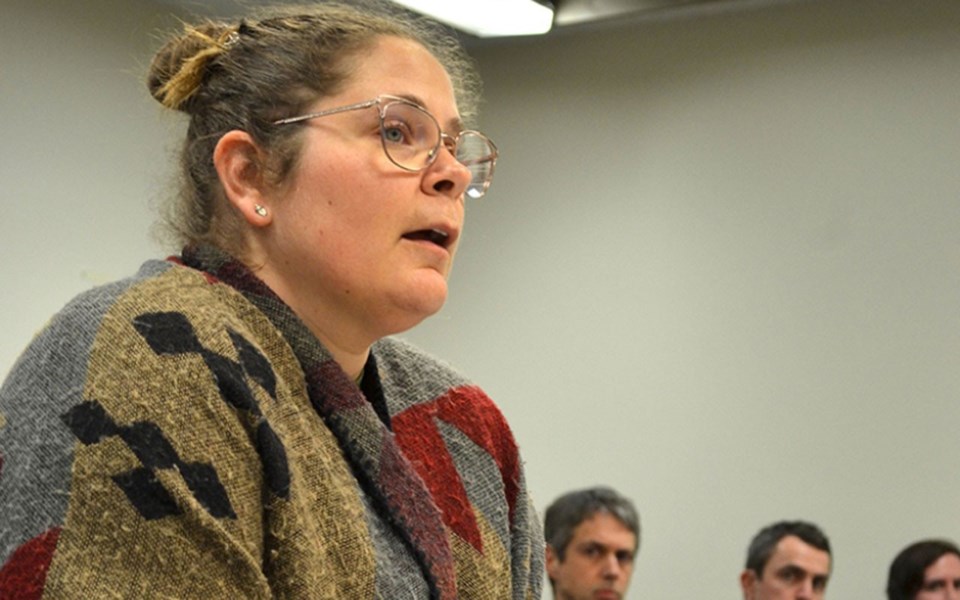 Ashley Oakes, executive director of Howe Sound Women's Centre, appeals to council on March 5 for a letter for support. Photo by STEVEN CHUA

With the chance of a neighbouring development looming, the Howe Sound Women’s Centre needs funding fast if it’ll ever stand a chance of building its proposed social housing project.

But it doesn’t know if or when it’ll get the desired $7-million cash infusion from BC Housing, Ashley Oakes, the executive director of the organization told council on Tuesday.

The centre aims to build 32 units on its land and on a neighbouring property.

It would be a mix of long-term affordable housing and second-stage housing, which provides support services to women for a year. The need is urgent, Oakes said.

“Our transition house has been operating at capacity for about a year—that’s a new development for us,” Oakes told The Chief.

“We are also often sending women out of the community. We see women who are leaving Squamish and Whistler.”

Oakes was at the Squamish municipal council meeting on March 5. She was asking politicians to draft a letter to BC Housing that would support the proposed project.

The centre filed their funding application with the provincial agency in March 2018 but still hasn’t heard back. Oakes hopes that a letter from council may speed up their reply.

Timeliness is crucial, as Oakes noted a realtor approached her organization and three neighbours in December with the idea of fusing their properties into a land assembly, presumably to sell to a developer.

Oakes said the centre turned down the proposal, but she’s uncertain if the neighbouring properties did the same.

Oakes said one of those landowners informally agreed to sell their property to the women’s centre if it can come up with the cash.***

"Without being able to purchase the property—which we may lose to this land assembly—we would only be able to develop 12 units, which would not meet the needs of our community," said Oakes. "Nor could we make the financing or cost recovery of that project work."

As of now, she's unsure of what's happening to those lands.

Coun. Chris Pettingill wondered if the District could somehow put a hold on that land so it won't get sold before BC Housing replies to the centre's application.

"It seems like it would be a good idea to protect this opportunity, at least until we hear back from BC Housing," said Pettingill.

Staff will discuss the matter with the centre.

***Editor's note: Oakes has since contacted The Chief to say she was mistaken in making this remark.

She wrote in a message: "I misstated when I said that one of our neighbours has informally agreed to sell us their property. What in fact took place, I have since learned, is that HSWC was approached by a local realtor in March 2018 indicating that his client, our neighbour, may be interested in selling to us. I am unsure whether any additional discussions occurred beyond this and I have reached out to our neighbour to discuss further."